Chiefs insist prep for Pack doesn't change with Rodgers out 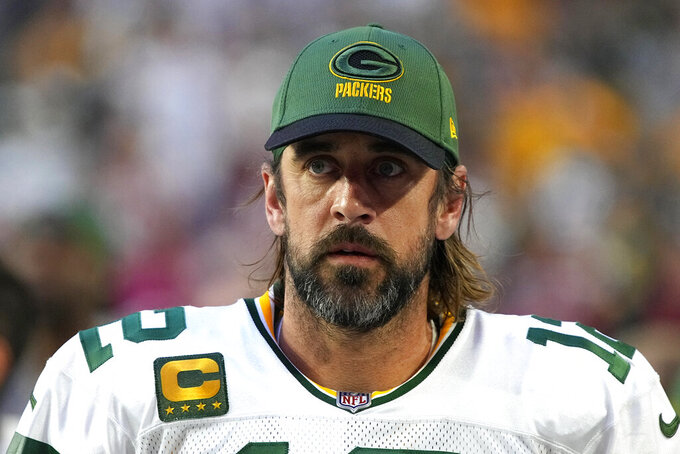 Green Bay Packers quarterback Aaron Rodgers (12) is shown during the first half of an NFL football game against the Arizona Cardinals, Thursday, Oct. 28, 2021, in Glendale, Ariz. Packers quarterback Aaron Rodgers is in the NFL’s COVID-19 protocol and will miss Sunday’s game at Kansas City. Green Bay coach Matt LaFleur confirmed Wednesday, Nov. 3, 2021, that Rodgers was in the protocol, but would not say if Rodgers had tested positive nor if the reigning NFL MVP has been vaccinated. (AP Photo/Rick Scuteri)

KANSAS CITY, Mo. (AP) — The Chiefs insisted Wednesday that their preparation for the Green Bay Packers would not change upon learning that league MVP Aaron Rodgers had tested positive for COVID-19 and would miss their matchup this weekend.

That doesn't mean there weren't a few relieved smiles behind close doors.

After all, rather than face one of the game's best quarterbacks Sunday at Arrowhead Stadium, the Chiefs and their much-maligned defense likely will get second-year pro Jordan Love making his NFL starting debut.

“It's definitely disappointing,” said Chiefs quarterback Patrick Mahomes, who has become close friends with Rodgers in part through shared endorsement deals. “I've watched him a long time. I feel like I play a similar style. You always want to play the best. Hopefully he's healthy, it's not too bad and he comes back stronger than before.”

After the Chiefs play the Packers, of course.

Then again, it's not like Mahomes would be responsible for slowing down Rodgers and the Packers offense. That task falls to a defense that ranks near the bottom of the league in just about every meaningful statistical category, even after Kansas City played better on that side of the ball in a 20-17 comeback win over the Giants on Monday night.

The Packers should still have running back Aaron Jones, who creates plenty of problems. They also hope to have Devante Adams back after their star wide receiver missed last week's win in Arizona with COVID-19, and running mate Allen Lazard, who had to miss the showdown in the desert because he's unvaccinated and was deemed a close contact.

“Adams is one of those receivers, it doesn't matter who is throwing him the ball. He's a tough cover,” Chief safety Tyrann Mathieu said. “The more I watch Jones, I like the way he runs the football. A lot of straight-line speed, a lot of power for his size. He runs through a lot of arm tackles. That's going to be a tough task for us.”

Still, they won't have Rodgers delivering them the ball downfield.

That's good news for the Chiefs given the way he's sliced them up in their past two meetings.

The Chiefs went on to beat the 49ers in the Super Bowl that season.

“Obviously, Aaron is a special player, probably one of the most talented quarterbacks in this league,” Mathieu said, “but in terms of preparation and mindset, our attitude — pretty sure those guys' offense won't change too much.

“It's all about information, recognition and understanding what's going on out there.”

In that respect, it helps that the Chiefs learned about the QB change on Wednesday. They didn't learn about Tyrod Taylor's injury until just before kickoff against the Chargers last year and were shredded by backup Justin Herbert in his debut.

The challenge now is to find some information on Love, even if that means going back to his college tape coming out of Utah State. Love has played quite a bit in the preseason, especially this year, but he's thrown just seven regular-season NFL passes with all of them in a blowout loss to the Saints in Week 1.

That's more than 6,800 fewer passes than the guy he is replacing.

“You know they're not going to completely change the whole offense. That's not going to happen,” Chiefs coach Andy Reid said. “You prep for the offense, and you take the unique qualities each one has and you work on that.”

NOTES: LB Melvin Ingram practiced Wednesday, less than a day after he arrived in a trade with Pittsburgh. There's a chance he could be active as soon as Sunday. “We brought him in during the offseason and we felt like he would be a nice addition to the room,” Reid said. “We were able to get him this time.” ... LB Anthony Hitchens (triceps) returned to practice, though RT Mike Remmers remained out with a knee injury.