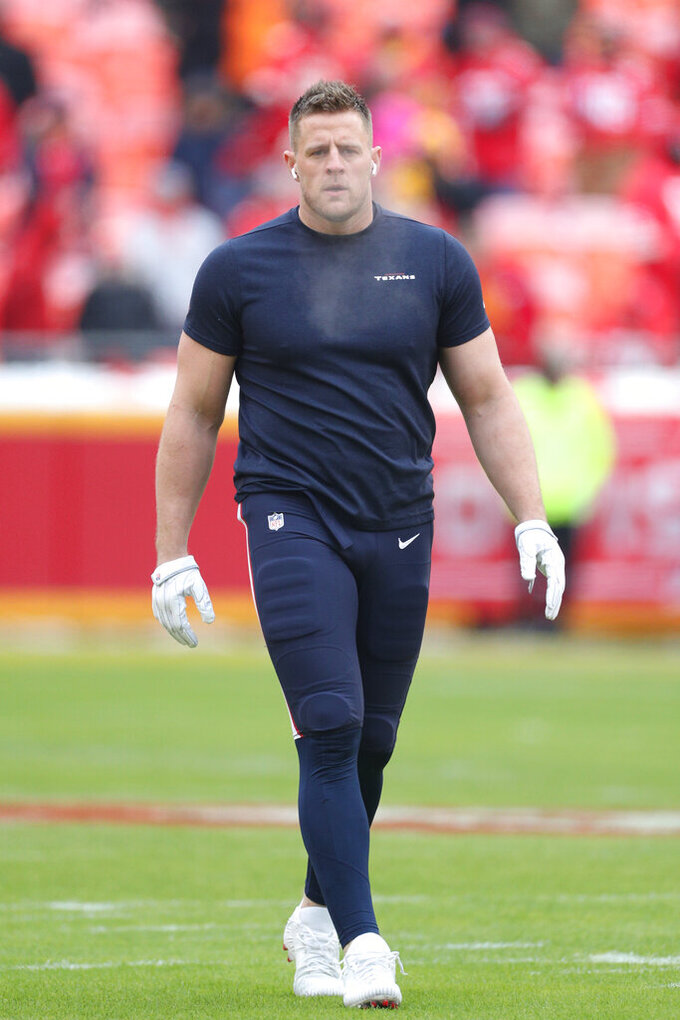 Houston Texans defensive end J.J. Watt (99) prepares to the game in shirt sleeves during a frigid pregame warmup prior to an NFL divisional playoff game against the Kansas City Chiefs, Sunday, Jan. 12, 2020 in Kansas City. (Margaret Bowles via AP)

KANSAS CITY, Mo. (AP) — The Kansas City Chiefs were without Pro Bowl defensive tackle Chris Jones for their divisional playoff game against the Houston Texans on Sunday after their sacks leader hurt his calf in practice and struggled through pregame warm-ups.

The Texans did have Will Fuller for the first time since Week 16 after the speedy wide receiver was pronounced ready to go from a groin injury. Fuller has been plagued by injuries this season, playing in just 11 of 16 regular-season games.

Jones, who missed the Chiefs' loss to Houston in Week 6 with a groin injury, strained his calf Thursday and did not work out at all the following day. He was listed as questionable on the final injury report and the Chiefs wanted to see how he would fare in warm-ups. He came out about 2 hours before kickoff wearing a compression sleeve on his calf and his usual knee brace, but he was clearly having trouble pushing off on his right leg.

Eventually, he walked off accompanied by trainers and was added to the Kansas City inactive list.

One the Texans didn't have to deal with Sunday.

They did have to contend with Pro Bowl tight end Travis Kelce, who also was questionable after tweaking his knee in practice. Kelce was limited throughout the week but the Chiefs were optimistic he would be ready to go.

Kelce has been finishing off one of the best seasons of his career. He already had become the first tight end in NFL history with four consecutive 1,000-yard receiving seasons, and he also became the first with back-to-back 1,200-yard seasons and at least 100 catches in consecutive seasons, all while being voted a team captain for the postseason.

Also inactive for Kansas City was offensive guard Andrew Wylie, who was a full-participant in practice after missing time with an ankle injury. Backup cornerback Morris Claiborne had been ruled out because of a personal issue, while linebacker Darron Lee, quarterback Chad Henne and offensive linemen Ryan Hunter and Jackson Barton were inactive.

The Texans, meanwhile, were glad to get Fuller back on the field. The No. 2 target for quarterback Deshaun Watson has been dynamic in the games he has played, catching 49 passes for 670 yards and three touchdowns.

“He stretches the field. He's a gifted kid. We know that,” Chiefs coach Andy Reid said earlier this week. “We know that he can scoot, so you've got to respect that.”

The Texans were without starting safety Jahleel Addae and backup tight end Jordan Akins, both of whom did not make the trip because of hamstring injuries. Also inactive were defensive linemen Carlos Watkins and Eddie Vanderdoes, wide receiver Steven Mitchell Jr., cornerback Cornell Armstrong and offensive lineman Elijah Nkansah.

Tight end Darren Fells (hip), wide receiver Kenny Stills (knee) and cornerbacks Johnathan Joseph (hamstring) and Keion Crossen (hamstring) were active after being limited in practice this week. Defensive end J.J. Watt also was limited early in the week but was ready for his second game since coming off injured reserve for a torn pectoral muscle.

“Just because I played one game doesn't mean my pec magically healed. It's still in basically the same situation it was in before this game (against Buffalo),” Watt said, "and obviously we played a little bit more in the last game than we expected to. So, it's just a matter of making sure we have a good plan, sticking to the plan and doing what we need to do all week long to make sure it's where it needs to be. But yeah, I don't know. We'll see.”