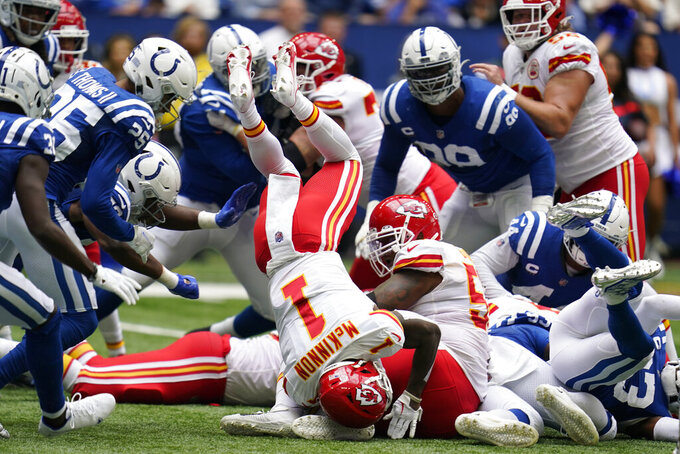 KANSAS CITY, Mo. (AP) — It’s often easy to forget amid the highlight-reel throws and jaw-dropping stats from Chiefs quarterback Patrick Mahomes over the years that nothing in the Kansas City offense works quite right without a good ground game.

Until you see it bottled up like last Sunday in Indianapolis.

The Chiefs only gained 58 yards on the ground — a measly 2 1/2 yards per carry — in what became a 20-17 loss to the Colts, and that inability to move the first-down markers affected everything else. Mahomes threw for just 262 yards and his first interception of the season, which came while trying in vain to rally his team for a tying field goal.

“We all have a piece in it,” Chiefs coach Andy Reid said Wednesday, looking ahead to a matchup with Tampa Bay and the NFL's fifth-best run defense. “The linemen can block better. We can all take responsibility for it. We all have to do better, that's the bottom line. You asked the question: We have to be better. Identify the issues and get it fixed.”

That includes the play calls, which the Colts seemed to guess in advance. And the play of the offensive line, which was among the league's best last season. And the play of Clyde Edwards-Helaire and the running backs who, in the rare chances with a seam, always seemed watched it close up before they had an opportunity to hit it.

Edwards-Helaire carried seven times. His longest run went for 4 yards. His net gain was nothing.

It was the worst game of the 2020 first-round pick's career, topping last year's blowout loss in Buffalo in which Edwards-Helaire gained 13 yards on seven carries and a 2020 win over Carolina in which he ran five times for 14 yards.

“It's something that all 11 players have to look at each other and kind of figure out,” Edwards-Helaire said. “It's all a trickle-down effect. It isn't one thing you can just pinpoint on one play. It's multiple positions on multiple plays.”

Things went so haywire against a Colts defense missing All-Pro linebacker Shaquille Leonard that the Chiefs' longest two runs were scrambles by Mahomes: one went 10 yards, another went 7. Ten of the 23 times they carried the ball, the Colts stopped them for a yard or less, and three of those times were behind the line of scrimmage.

The meager 58 yards rushing was the lowest output by the Chiefs since a regular season-ending loss to the Los Angeles Chargers in 2020, when they gained 51 yards in a game that most of the starters sat out ahead of the playoffs.

Yet poor rushing performances and losses tend to go hand in hand in Kansas City.

Over the past four-plus years, which encompasses four consecutive trips to the AFC title game, the Chiefs are 42-6 when they top 100 yards rushing and 18-13 when they do not.

Their average yardage during those wins is just over 121 per game, while their average in losses is a shade under 92 yards per game.

There are extenuating circumstances, of course, such as that fact that teams with a big lead are more likely to run the ball, control the clock and attempt to wrap up the win, while teams playing from behind tend to throw the ball more.

Defensive personnel and schemes are sometimes built to defend the run, and even the weather and location — whether the game is indoors or outside — can play a factor in whether a team has success on the ground.

But the raw numbers over the past four years nevertheless provide ample evidence that just about everything works better within the framework of the Chiefs' famously high-flying offense when their ground game gets going.

“We have to gel all together. It starts with me,” Mahomes said. “Whenever you are playing a tough game like (last week), you have to execute at a higher level, and we have to learn from it. Our schedule gets no easier. We have a hard game on ‘Sunday Night Football’ in Tampa this week against a great defense. We have to get better quickly.

“If we don't,” Mahomes added, “well, we don't want those L's to start piling up. We want to get back on the winning train.”

NOTES: DE Mike Danna (calf) and WR Mecole Hardman (heel) returned to practice Thursday. RB Ronald Jones remained out with an illness. ... K Harrison Butker got the day off after kicking on Wednesday, and there is optimism that he will be back for the first time since spraining his plant ankle in the opener against Arizona. “He had a real good day yesterday,” Chiefs special teams coach Dave Toub said. “He's a little sore today so we're not kicking him today. We're trying to get him ready for the game.” ... WR Skyy Moore will continue to return punts after fumbling one against the Colts that led to a touchdown and nearly fumbling another. “He's not hiding from it,” Toub said. “He made a mistake. Mistakes happen with young players.”