Chiefs leaning on culture, experience to eke out close wins 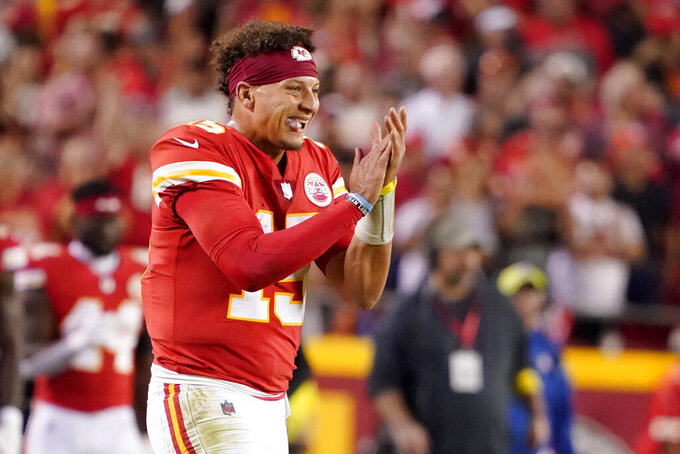 KANSAS CITY, Mo. (AP) — The Kansas City Chiefs have been walking a fine line between success and failure through the first month of the season.

But whether it was the frantic finish to beat the Chargers, their collapse in Indianapolis or their close shave Monday night, when the Chiefs rallied from a 17-point deficit for a 30-29 victory over the Raiders, one thing has become clear: This isn't the same Chiefs team that once routed opponents with speed and big plays and unstoppable offense.

Instead, it's one that thrives on overcoming adversity.

“It was hard work, staying together,” said Chiefs safety Justin Reid, who was run over by the Raiders' Josh Jacobs at one point during the game. "Give credit to the culture of this team, that we didn’t start falling apart on each other when things looked ugly. We found a way to battle through the adversity and come out on top.”

Indeed, it was the defense that came through in the end.

The Chiefs had rallied behind four touchdown passes from Patrick Mahomes to Travis Kelce to take the lead in the fourth quarter, and they had a chance to run out the clock if they could keep picking up first downs.

But instead, they were forced to punt the ball back to Las Vegas with about 2 1/2 minutes remaining in the game.

The Raiders picked up two first downs, moving close to midfield, before an incompletion and a pass to Hunter Renfrow set up third-and-short.

That's when the Chiefs covered Davante Adams well enough that replays showed he had to juggle a long catch down the sideline, bringing up fourth down.

And then came a furious blitz, forcing Raiders quarterback Derek Carr to heave the ball downfield, where the only receivers in the area collided and the pass fell incomplete.

The Chiefs had their fourth straight win over their bitter rivals.

One that was as close as it gets.

“Being down by 17, nobody cracked,” said Kelce, who matched a Chiefs record for TD catches in a game. "You didn’t see doubt in anybody’s eyes. All it did was build the beast, made us rally together, circle the wagons in a way and fight for each other. When you see that out of us — we know we can play some good football when we have that kind of mentality.”

Imagine if they keep that mentality once they get healthy.

The Chiefs hope to get first-round pick Trent McDuffie back from a hamstring injury, and the cornerback should help a pass defense that Adams beat for TD catches of 58 and 48 yards.

Willie Gay Jr. has one game left on a four-game suspension. Defensive end Mike Danna (calf) and kicker Harrison Butker (ankle) should be back soon, too.

“We have a lot of the same players that have been in some deficit games,” Mahomes said, "but at the same time we have a lot of new guys as well. And so for guys to respond and just to keep battling, no matter we’re down 17 points, and show that we can fight back from anything, that’s what you want to see out of any great football team.”

The Raiders did a good job blanketing Kelce everywhere but the end zone. All four of his TDs came within 10 yards of the goal line; he had seven catches for 25 yards in all.

And given the struggles the Chiefs have had running the ball in short-yardage situations, Kelce's ability to carve out space offers them a priceless security blanket.

The pass defense allowed 241 yards and the two TD tosses to Adams, but the only reason it wasn't more was the fact that Jacobs was having such a heyday on the ground, running for 154 yards and a score. Adams also drew a pair of pass interference calls, the second of which gave Las Vegas the ball at the goal line and led to a touchdown.

Jerick McKinnon has largely been an afterthought behind Clyde Edwards-Helaire and Isiah Pacheco in the Chiefs backfield, but it was the veteran that provided a spark with a tackle-busting 30-yard run that led to their first touchdown. McKinnon finished with a team-high 53 yards rushing on just eight carries while catching two passes for 19 yards.

Defensive back Rashad Fenton was burned by Adams on his first long TD catch, had one of the pass interference penalties and was caught out of position on another long pass play later in the game.

It was the latest in a string of poor performances for one of last season's pleasant surprises, who should have a sense of urgency given it's a contract year.

DT Tershawn Wharton's season is over after tearing the ACL in his left knee. Defensive end Frank Clark had to leave the game with an illness, safety Bryan Cook sustained a concussion and cornerback Chris Lammons hurt his right hip.

59 — Fill-in kicker Matthew Wright broke the Chiefs record for longest field goal, shared by Butker and Nick Lowery, while helping tie the franchise record for having a made field goal in 18 consecutive games. The kick just before halftime trimmed the Chiefs' deficit to 20-10 and gave them momentum heading into the locker room.

The Bills visit Arrowhead Stadium on Sunday for a rematch of their overtime thriller in last year's playoffs, which Kansas City won in overtime after a flurry of scoring in the final minutes.