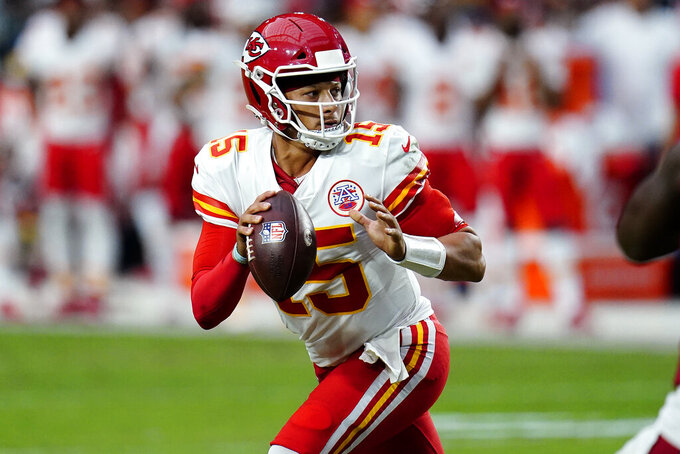 KANSAS CITY, Mo. (AP) — Patrick Mahomes and the rest of the Kansas City Chiefs' first-team offense will take the field for at least the first half of their preseason finale against the Minnesota Vikings on Friday night.

It would probably ease a lot of anxiety if they could find a little bit of rhythm.

Mahomes only threw two passes in their preseason opener in San Francisco, and he was just 10 of 18 for 78 yards with an interception and no touchdown passes last week in Arizona. And that leaves the third preseason game as the last chance for the Chiefs' high-powered offense to get in sync before they face the Cleveland Browns on Sept. 12.

Mahomes has never played in the fourth preseason game since becoming the starter prior to the 2018 season, and last year there were no preseason games at all. So the fact that there's just three now shouldn't make much of a difference, especially given how much experience the 25-year-old 2018 league MVP has under center.

But one thing that's been consistent is that Mahomes performed well in his third preseason game, and that tends to give him and the rest of the Chiefs' offense a big boost of confidence heading into the season opener.

Think back to 2018, when he went 18 of 24 for 196 yards and a touchdown in a preseason game in Chicago. He followed up by throwing for 256 yards and four touchdowns in the season opener against the Chargers, then threw for 326 yards and six scores the next week in Pittsburgh, and 314 yards and three more scores in Week 3 against San Francisco.

Not a bad way to roll into your first season as the full-time starting quarterback.

Or think back to 2019, when Mahomes was 2 of 5 for 11 yards in his second preseason game in Pittsburgh. He was 8 of 10 for 126 yards and a score in a near-flawless exhibition showing the next week against the 49ers, and rolled that into a big Week 1 performance in Jacksonville: 25 of 33 for 378 yards and three scores in a 40-26 victory.

“I think we've done a great job (this preseason),” Mahomes said last weekend in Arizona. “We don't have our full game plan in, but we've done some good stuff, and we've made some calls that we'll be calling throughout the regular season. ... So it's definitely been a good first two games and I'm looking forward to the third.”

The first at Arrowhead Stadium this season, too.

That's not to say there isn't work to be done. The Chiefs are breaking in five new offensive linemen after their dismal performance up front in the Super Bowl, and building communication between Mahomes and a group that includes three first-year starters is crucial. Mahomes has always had a veteran group in front of him.

“One thing that we always talk about is the importance of overcommunicating,” Chiefs offensive coordinator Eric Bieniemy said. “Good, bad or indifferent, as long as the communication is there and everybody is on the same page, we'll always find a way to make it right. But we have to continue working on that, and that's an aspect of when you've got young players up front. You want to make sure you're continuing that continuity and building that chemistry.”

Especially when there is only one more opportunity to do it before the games start to count.

“Obviously, at practice, you’re going hard,” Mahomes said, "and you can really communicate. There’s a crowd, but it’s not loud. People’s juices are flowing in the game. So, whenever the game is going on, being able to communicate with the whole offensive line, being on the same page and being able to execute whenever the play is called is important.”