Chiefs peaking in all phases as postseason comes into sight 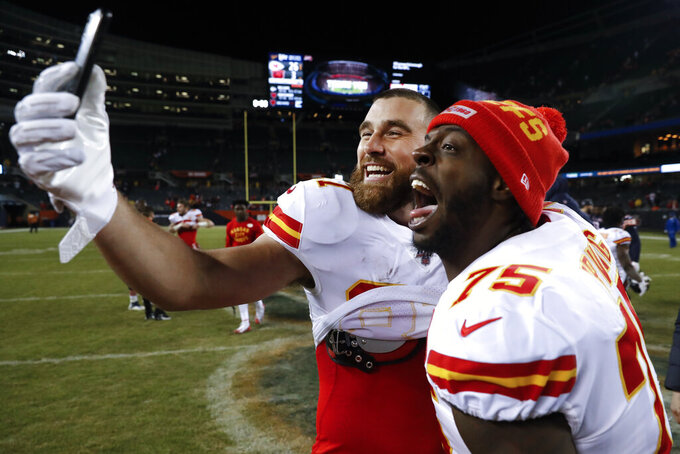 KANSAS CITY, Mo. (AP) — The Kansas City Chiefs were so dominant in all phases of their 26-3 victory over the Chicago Bears on a cold Sunday night at Soldier Field that it was hard for coach Andy Reid to highlight everyone in his post-game news conference.

Their redesigned defense, now with veteran pass rusher Terrell Suggs in the mix, held their fifth straight opponent to 17 points or fewer. In fact, it was the second straight holding an opponent to three or fewer, the first time Kansas City had done that since Weeks 3 and 4 of the 1990 season — a full five years before Patrick Mahomes was born.

Speaking of the Chiefs' quarterback, he threw for 251 yards and accounted for three touchdowns in another ho-hum-yet-incredible performance. In doing so, Mahomes became the fastest quarterback to eclipse 9,000 yards passing and hit 75 touchdown passes by reaching the mark in 30 games — four faster than Hall of Fame quarterback Dan Marino.

Even the special teams were special on Sunday night. Harrison Butker connected on a 56-yard field goal, the fourth-longest in franchise history. It was his third 50-plus-yarder of the season, the third-best total in Chiefs history.

“I stood up here and I told you, I think, the last few weeks that I've been impressed with the group,” Reid said. “Everybody contributing and staying aggressive and making plays. I can't say enough about the growth of our defense and we're staying consistent. It was nice to get the run game going a little bit today and I think that helps.”

That might be the only thing that could use some improvement down the stretch.

Sammy Watkins joined Travis Kelce and Tyreek Hill in having big days through the air, and the Kansas City offensive line did an admirable job of keeping Khalil Mack and the Bears pass rush in check. On the other side, Suggs joined Frank Clark and Chris Jones in pressuring the quarterback while safety Tyrann Mathieu was making plays everywhere on the field.

The Chiefs (11-4) started the season hot, went through a midseason swoon, and now appear to be peaking at just the right time. They head into next week's regular-season finale against the Chargers still hopeful of a No. 2 seed in the playoffs and a first-round bye — they need to win and hope the Patriots lose to the Dolphins.

Regardless, there is a profound sense of confidence surrounding the Chiefs as the postseason draws near.

“I think we're building. I think that's one of the biggest things you've seen these last six weeks,” Mahomes said. “The defense, you can see the steady improvement every single week and how they're not letting up any week. And then offensively, we're trying to start to get back on track where we were the beginning of the season. I think that comes with a lot of healthy guys getting back in the flow of things and we're kind of building that chemistry that we had at the beginning of the season. So I'm excited that we're moving offense, defense, special teams in the right direction.”

The pass game. The run game. The pass defense. The run defense. In short, just about everything is working. The Chiefs have outscored their four opponents 112-31 since the bye week. The most points allowed were 16 to Oakland, and the Chiefs have not scored fewer than 23 during that recent stretch.

The Dolphins. The Chiefs must take care of business against the Chargers this weekend, but they also need Miami to spring a big upset against New England to jump the reigning Super Bowl champions for the No. 2 seed in the AFC.

Running back LeSean McCoy was a healthy scratch for Kansas City on Sunday night. The Chiefs have been trying to manage the veteran's workload, but that means McCoy has had a mere six touches the past two weeks combined.

Running back Spencer Ware and cornerback Bashaud Breeland left briefly with shoulder injuries, but both of them were able to return to the game. That leaves the Chiefs about as healthy as they've been all season heading into Week 17.