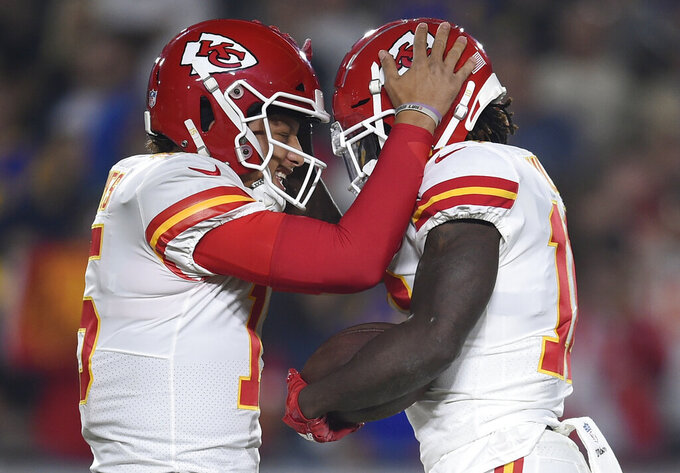 FILE - In this Nov. 19, 2018, file photo, Kansas City Chiefs wide receiver Tyreek Hill, right, celebrates after he caught a pass for a touchdown from quarterback Patrick Mahomes, left, during the first half of the team's NFL football game against the Los Angeles Rams in Los Angeles. Mahomes has just about everyone back in his quest to get the Chiefs to their first Super Bowl in 50 years, including star receiver Hill, who was cleared to play by the NFL following an offseason domestic violence investigation. (AP Photo/Kelvin Kuo, File)

Strengths: Chiefs chose Hardman in second round with initial draft pick when future of WR Tyreek Hill was uncertain due to domestic violence investigation. Hill has been cleared to play, which means Hardman gives QB Patrick Mahomes another speedy target in high-flying offense. Mahomes is building off record-setting debut as starter, throwing for more than 5,000 yards with 50 TD passes.

Weaknesses: Defense kept Chiefs from potentially beating Patriots in AFC title game, leading to wholesale rebuild. Spagnuolo has changed scheme from 3-4 to 4-3 base, and GM Brett Veach overhauled roster to better fit system. Mathieu and Clark were pricey acquisitions but give defense sorely missing grit, leadership and playmaking. Question remains: Will it be enough?

Fantasy Players To Watch: Mahomes is only QB worth taking ahead of first dozen RBs and top WRs in most leagues. New weapons and experienced offensive line mean reigning league MVP could produce even gaudier stats than last season.

Expectations: Super Bowl or bust for Chiefs. Mahomes established himself as NFL's top QB last season, Hill and TE Travis Kelce are among best in league at their positions, and veteran OL should make offense hum. Revamped defense should give Chiefs better chance of getting off field, which they failed to do in OT against Patriots in AFC championship. CEO Clark Hunt made clear goal this season is to win Lamar Hunt Trophy — named for his father — that is given to conference champion. Fans have made clear their goal is winning the Lombardi Trophy for first time since January 1970.