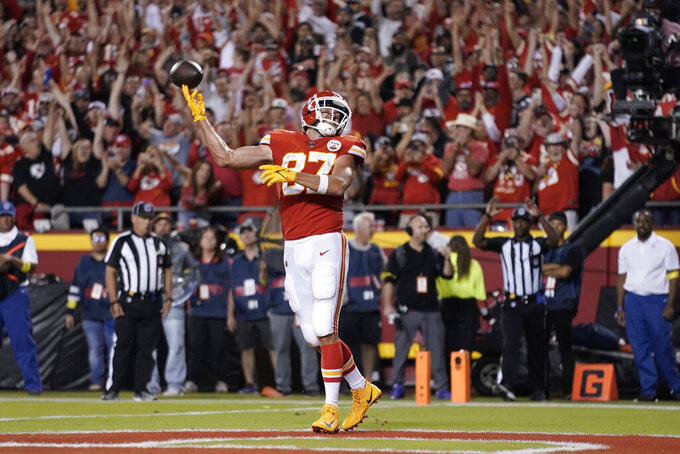 Instead of a Halloween slasher movie, Shanahan rewatched his most painful loss as a head coach when he put on video of the 49ers' loss to Kansas City in the Super Bowl following the 2019 season ahead of the rematch against the Chiefs.

“I hadn’t watched it for a while until these last two days,” Shanahan said. “I don’t like watching it, but this week it wasn’t about that. I had to watch it for schematic reasons and what our history is together.”

The history of that loss will was painful and it hasn't lessened that much ahead of Sunday, when the Chiefs (4-4) will visit the 49ers (3-3).

San Francisco had a 10-point lead in the fourth quarter before Patrick Mahomes led three touchdown drives and Jimmy Garoppolo and the Niners' offense fell flat late in a 31-20 loss.

"I felt like that year we had the best team in football, but we ended up being the second best because we didn’t get it done in the end,” Shanahan said.

Mahomes was at the top of the football world back then, having won the MVP in his first season as a starter in 2018 and then the Super Bowl MVP the following season.

But since then, the Chiefs lost the Super Bowl the next year, fell in the 2021 AFC title game at home to Cincinnati and now are trying to get back to the big stage this year with an offense that has undergone lots of changes but still has Mahomes, star tight end Travis Kelce and coach Andy Reid.

“I think I just kind of thought that’s just what you did, you went out there and played football for Coach Reid and you win the MVP, and you win Super Bowls,” Mahomes said. “But now I see ... the grind and being in there every single day and not succeeding and not winning the Super Bowl. I think if I had the chance to go out there and win another one, I think I’ll appreciate it even more.”

HELP ON THE WAY

Both teams could be getting some reinforcements with the Niners hoping to get left tackle Trent Williams (ankle), defensive end Nick Bosa (groin) and safety Jimmie Ward (hand) back from injuries.

The Chiefs could get first-round pick Trent McDuffie and linebacker Willie Gay Jr. back this week as well. McDuffie hurt his hamstring in the opener against Arizona and the cornerback returned to practice last week. Gay just concluded a four-game suspension for an off-the-field incident that happened earlier this year.

The NFL has designated Sunday as National Tight Ends day, a recently created holiday that features one of the best matchups around.

Kansas City's Kelce has long been the league's top receiving tight end, while San Francisco's George Kittle is viewed by many as the best all-around tight end based on his blocking and receiving.

“He's a great tight end. He's the best in the league right now,” Ward said of Kelce. “I always root for my guy Kittle. But as of right now, Kelce is out there catching more balls. But blocking, I’m going with Kittle all day.”

Kansas City is known for pulling out some tricks in the red zone. The Chiefs' first TD drive in the Super Bowl featured one of those when Kansas City pulled out a play from Michigan's 1948 Rose Bowl win over USC to convert a fourth down.

Kansas City lined up with four players in the backfield, who all spun in unison before a direct snap to Darrell Williams led to the conversion on fourth-and-1.

“It was very creative,” linebacker Dre Greenlaw said. “We’ll be more alert and know what we’re getting from Andy. We’ve got to be on our P’s and Q’s.”

Reid has a soft spot for San Francisco defensive coordinator DeMeco Ryans. It was Reid that acquired him from Houston in a 2012 trade in an attempt to upgrade the Eagles' defense. Ryans wound up leading the team with 113 tackles, though they still finished 4-12 and Reid was ultimately fired.

“Phenomenal person, absolutely brilliant as a player, just understanding the game,” Reid said. “I’m very happy for him. He’s one of those guys you pull for unless you’re playing against him.”

The Niners are honoring another of their teams that fell just short at the end with a ceremony this weekend. San Francisco is welcoming back members of the 2012 team that lost in the Super Bowl to Baltimore.

Coach Jim Harbaugh is expected back for the first time since his “mutual parting” following the 2014 season that sent him back to college at Michigan. It's uncertain whether quarterback Colin Kaepernick will be among the players on hand.