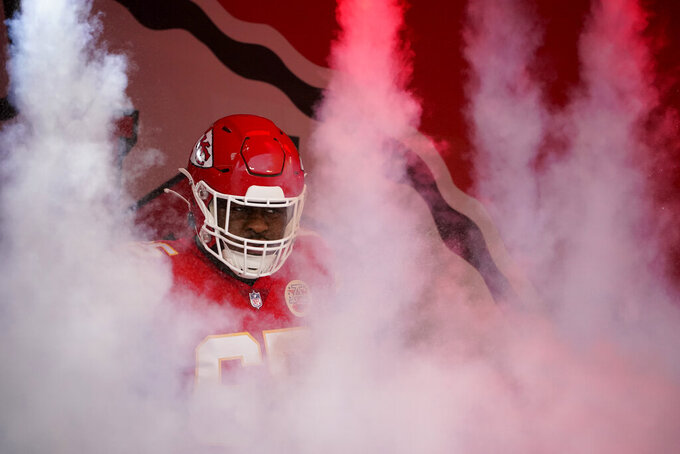 Turns out the NFL's hottest team was just fine.

Patrick Mahomes was masterful in throwing for 258 yards and three touchdowns, Byron Pringle and a cast of fill-ins rose to the occasion, and the defense dominated the Pittsburgh Steelers in a 36-10 drubbing at Arrowhead Stadium.

“This is the type of week where it's so great to have an experienced coach like Andy Reid, somebody who is so steady — somebody who has seen virtually everything that the NFL can throw at them," Chiefs chairman Clark Hunt said. “This was a different challenge, but his preparation is so thorough that they were able to get the guys who were able ready to play.”

The Chiefs (11-4) remained a game ahead of Tennessee for first place overall in the AFC with their eighth straight win. That would give them the conference's lone first-round bye and home-field advantage throughout the AFC playoffs.

Clyde Edwards-Helaire had a touchdown run for Kansas City before leaving early in the second half with a collarbone injury. Darrel Williams and Derrick Gore carried the load the rest of the way, Williams running for 55 yards and Gore adding 43 yards on the ground and three catches for 61 yards.

“The guys all played together, which I don't think you can avoid talking about,” Reid said. “The way they supported each other when there was a problem, when something didn't work — everybody just hung together.”

Meanwhile, the Steelers (7-7-1) continued to fall apart down the stretch. They became the first team in NFL history to trail by at least 23 points at halftime in three straight road games. They have failed to score a touchdown in the first half of five straight games for the first time since 1940.

Already on the playoff bubble, Pittsburgh dropped further behind the Bengals (9-6) in the AFC North.

“We didn't do enough in any phase to give ourselves a chance,” Steelers coach Mike Tomlin said. “This is a collective, players and coaches, man. We own this. Now we have to get singularly focused on our two remaining division games.”

Ben Roethlisberger threw for 159 yards with a late fourth-quarter touchdown for Pittsburgh, along with throwing an interception and losing a fumble. Najee Harris added 93 yards rushing, but most of that came with the game out of reach.

The Chiefs were crushed by a COVID-19 outbreak early in the week — at one point they had 13 players on the active roster and three on the practice squad test positive. They managed to get Hill and several others cleared in time for kickoff, but Kelce was among three starters unable to test out of protocols Sunday morning.

After watching the Chargers improbably lose to the Texans earlier Sunday, the Chiefs — who began the season 3-4 — knew they merely had to beat inconsistent and offensively challenged Pittsburgh to wrap up another division title. They made it look easy on both sides of the ball.

The Chiefs went 73 yards on their opening possession with Edwards-Helaire bouncing off Robert Spillane for a score. Pringle scored his first TD after Roethlisberger was picked off on a flea-flicker. Mecole Hardman hauled in a touchdown throw from Mahomes, and fill-in kicker Elliott Fry hit a 44-yard field goal for a 23-0 halftime lead.

“It was us just filling those voids and those places and those spots on the field,” Hardman said, “and doing the best we can.”

The Steelers at that point? Two punts, a pick, a turnover on downs, a missed field goal at the end of the half.

They started the second half watching Diontae Johnson fumble the ball away, too. The Chiefs tacked on another TD when Mahomes found Pringle in the back of the end zone, putting the game away by midway through the third quarter.

Steelers: RG Trai Turner (knee) and C Kendrick Green (calf) were banged up during the game.

Chiefs: Edwards-Helaire left after two carries to start the second half. ... FS Tyrann Mathieu left in the fourth quarter with a quad injury. He had been hobbled while in coverage earlier in the third quarter.

Chiefs LB Nick Bolton and RT Lucas Niang were activated from the COVID-19 list along with Kelce on Saturday in hopes they would test out of protocol by kickoff; none did. Fry handled kicking duties with Harrison Butker in the protocol, and Johnny Townsend handled punting duties for his brother, Tommy, who also tested positive.

The Steelers were missing LB Devin Bush and four other backups to positive COVID-19 tests.

The Steelers return home to face Cleveland on Jan. 3.

The Chiefs visit Cincinnati on Sunday.