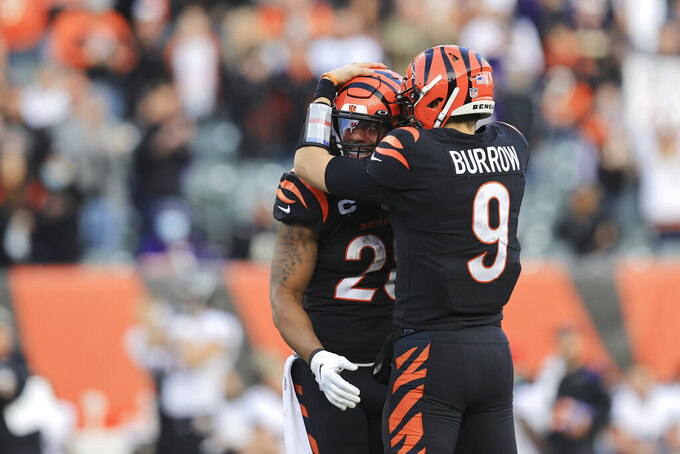 Cincinnati Bengals quarterback Joe Burrow (9) hugs Joe Mixon (28) following a catch by Mixon during the second half of an NFL football game against the Baltimore Ravens, Sunday, Dec. 26, 2021, in Cincinnati. (AP Photo/Aaron Doster) 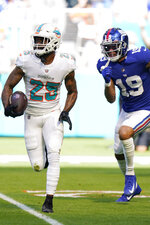 Something we've come to expect is Kansas City closing in on AFC home-field advantage for the playoffs and the only bye. A win and the Titans losing to the Dolphins does the trick.

As for the Cincinnati Bengals clinching anything but a high draft choice? Well, if the No Longer Bungles (9-6) manage to knock off the Chiefs (11-4), who have won eight in a row, they will own the AFC North.

“I think whoever is lining up across from us, we’re going to be excited to play,” says Joe Burrow, who comes off his best game — and one of the most prolific in NFL history — with 525 yards passing. “This is a big opportunity, whether it’s the Chiefs or whoever we throw out there against us. We have an opportunity to win and make the playoffs.”

It won't be easy. The Chiefs have qualified for the playoffs eight times in nine seasons under Andy Reid. He will coach his 400th game Sunday; the only other coaches to reach that are Don Shula (526), George Halas (506), Bill Belichick (474) and Tom Landry (454).

Quarterback Patrick Mahomes is trying to win his 27th consecutive game as the starter in the months of November, December and January. He is 33-5 in those months.

“Our guys came in with the right mentality every single day to get better and we’re sitting where we’re at now, but the job is not finished,” Mahomes says. “We still have to try and find a way to get this No. 1 seed playing two great football teams these next two weeks, and then try to make a run in the playoffs.”

While Cincinnati controls the AFC North, the slumping Ravens require a complete reversal to remain viable for the postseason. Baltimore has dropped four consecutive games, equaling its longest slide under coach John Harbaugh. It hopes to get back quarterback Lamar Jackson from an ankle injury.

Led by the unstoppable Cooper Kupp, the Rams can clinch the NFC West with a win and an Arizona loss. Kupp has 1,734 yards receiving, seventh on the NFL’s single-season list. Calvin Johnson (1,964) holds the record. Kupp’s 132 receptions are fifth on the single-season list, behind Julio Jones (136), Tim Brown (136), Marvin Harrison (143) and Michael Thomas (149).

Looks and sounds like Ben Roethlisberger's last regular-season home game — and the Steelers' chances of making the playoffs are slim.

“I don’t ever speak in definites or guarantees,” the 39-year-old quarterback says. “That’s just not what I’ve ever done, or who I am. But looking at the bigger picture, I would say that all signs are pointing that this could be it.”

Beating the team from his home state against which Big Ben is 25-3-1 could be a sweet conclusion.

Cleveland has lost 17 straight regular-season games at Heinz Field. The most recent win was in 2003. And the Steelers are 14-1 against Cleveland in home regular-season finales.

Buffalo seemed to be sinking, but its win at New England lifted the Bills to the top of the AFC East. They clinch a playoff berth with a win and Baltimore loss or defeats by the Chargers and Raiders.

Buffalo is 6-0 when scoring a touchdown on its opening drive, and 8-1 when scoring a TD rushing this season. But it is 1-6 when trailing at any juncture of a game.

The Falcons have takeaways in 11 straight games, the NFL’s longest active streak. It’s Atlanta’s longest run since an 11-week stretch spanning the 2011 and ’12 seasons.

This looks like a no-contest, even with the Patriots having dropped their past two and lost control of the AFC East. New England is 7-1 against Jacksonville in the regular season and 8-0 overall against the Jaguars in home games.

A Patriots victory and losses by either Miami or Las Vegas gets New England into the postseason.

The Jaguars have lost 16 consecutive road games, the longest skid in the league. They have scored nine touchdowns in their past nine games.

Other than Kansas City, no team has been as successful the past two months as Miami. The first to win seven in a row after losing seven straight, the Dolphins have ridden an opportunistic defense within striking distance of the playoffs.

The Titans can clinch a second straight AFC South title and third straight playoff berth with either a victory or a Colts loss. Tennessee hasn’t won back-to-back division titles since the then-Houston Oilers won the first three Eastern Division crowns in the AFL between 1960 and 1962.

The availability of Indy quarterback Carson Wentz (COVID-19/unvaccinated) is uncertain, but the Colts have the NFL's top rusher, Jonathan Taylor, and a staunch defense. They lead the NFL with 122 points off turnovers.

Indianapolis can clinch its third playoff berth in coach Frank Reich’s four seasons with a victory. The Colts have won six of seven and eight of 10.

The Raiders can get their second playoff berth in 19 seasons by winning their final two games. But Las Vegas has scored 17 points or fewer in four straight games.

Get this: The Jets are 7-0 at home against the Buccaneers, 10-2 overall. Of course, none of those wins came with Tom Brady at quarterback for Tampa Bay.

Brady is completing his first full tour of the AFC East since leaving New England last season. He won 17 division titles in 20 years with the Patriots and has already beaten his old team, plus the Dolphins and Bills this season. Brady leads the NFL with 4,580 yards passing and 37 TDs. In 38 starts against the Jets, going 30-8, he has averaged 241.1 yards per game and thrown for 61 TDs.

Two teams headed in opposite directions even though both are in the playoff field.

Dallas has won four consecutive games and wrapped up the NFC East. The Cowboys lead the NFL in scoring offense (30.5 points per game) and takeaways (33). Only five teams have led the league in each category since 1970, with three of them making the Super Bowl and the 1971 Cowboys winning the title.

Arizona has lost three straight games since starting the season 10-2. The Cardinals are an NFL-best 7-1 on the road, but their most recent away game was a 30-12 defeat at Detroit. Maybe they have a secret weapon for AT&T Stadium: Kyler Murray is 7-0 as a starter at the home of the Cowboys after winning in his first appearance as a pro there last season. He has five high school victories and a Big 12 championship game against Texas in 2018.

One of the NFL's hottest teams, the Eagles have seized a wild-card position heading into Week 17. The Eagles have run for at least 125 yards in nine consecutive games for the third time in franchise history and the first since 1949. They need 160 rushing yards to set a single-season franchise record. But Boston Scott might be the only experienced running back available for the league’s top-ranked rushing offense because of injuries to Miles Sanders and Jordan Howard.

Philadelphia and Washington are playing for the second time in less than two weeks. Their first game was pushed back two days because of Washington’s COVID-19 outbreak.

One of several challengers for one of two NFC wild-card spots remaining, the 49ers could be without quarterback Jimmy Garoppolo (finger). The 49ers can clinch their second playoff berth in the past eight seasons with a win and a New Orleans loss to Carolina. The Niners had been 18-0 under coach Kyle Shanahan when leading by at least 10 points at halftime before losing last week at Tennessee.

“I don’t know the exact numbers," Shanahan says of the team's playoff situation. “The one thing I do know is if we win both of the games that we’re in. I know it’s going to be hard if we lose any.”

Houston has won consecutive games for the first time this season.

San Francisco leads the series 3-1. The four matchups between the teams are the fewest among any current clubs.

While the Packers can secure the only NFC postseason bye with a victory and a Dallas defeat, Minnesota is on the edge of the cliff. A big output by Dalvin Cook and Justin Jefferson probably is required, but they’ll have to do it without Kirk Cousins after the quarterback was placed on the COVID-19 list Friday. The previous time the Vikings visited Lambeau Field, Cook rushed for 163 yards and two touchdowns and caught three passes for 63 yards and two more scores in a victory. Jefferson had 10 catches for 169 yards and two touchdowns when the Vikings beat the Packers in Minnesota earlier this season.

After stumbling against Houston in part due to so many COVID-19 positives and injuries, the Chargers need a huge turnaround to remain in contention. Justin Herbert needs two touchdown passes to set a single-season team record; Philip Rivers threw 34 in 2008.

Denver is not mathematically out of it, but looks that way. The Broncos must win to avoid their fifth straight losing season. It would be their longest such streak since 1963-1972, a run that includes their last seven years in the AFL and first three seasons in the NFL.

What a rough season for the usually contending Seahawks: they are 2-5 at home after going 7-1 last season.

Russell Wilson needs two touchdown passes to join Peyton Manning and Dan Marino as the only QBs with at least 20 in each of their first 10 seasons. And with six tackles, linebacker Bobby Wagner would post the most by any player since 2000. Wagner has 170 tackles through 15 games.

The Saints are a longshot to get into the playoffs, but DE Cameron Jordan is closing well. He has had two sacks in each of the past two games and has eight sacks in his past nine games.

Carolina WR D.J. Moore is one of three NFL receivers with 1,000 yards receiving in each of the past three seasons. Stefon Diggs and Tyler Lockett are the others.

New York has sunk so far it might be playing worse than any team. The Giants have lost four straight overall and six in a row on the road. They have scored a combined 46 points in the four games since Daniel Jones was hurt.

Chicago also is a mess but linebacker Robert Quinn could have a personal field day. Quinn ranks second in the NFL with 17 sacks — the team record held by Hall of Famer Richard Dent is 17 1/2 in 1984. He also needs a half-sack to reach 100 in his career.