Chiefs set to welcome back 2 key defensive players vs 49ers 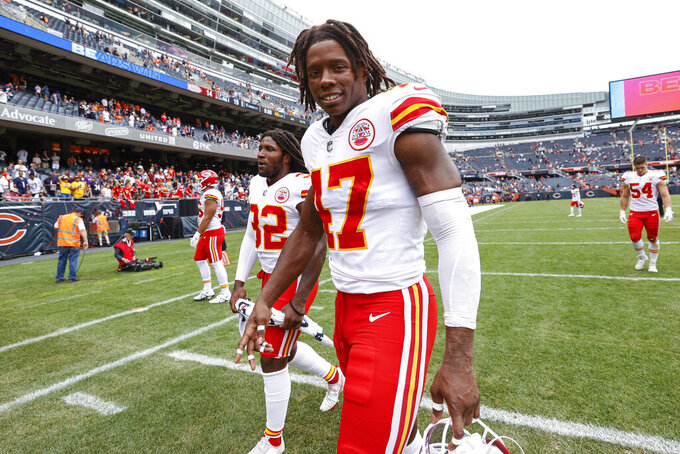 FILE - Kansas City Chiefs linebacker Darius Harris walks off the field after a preseason NFL football game against the Chicago Bears, Saturday, Aug. 13, 2022, in Chicago. Matt Ammendola has nicely replaced Chiefs kicker Harrison Butker, who is trying to recover from a sprained ankle. Now it's up to Darius Harris to fill in for Willie Gay, the starting linebacker who is suspended for the next four games. (AP Photo/Kamil Krzaczynski, File)

KANSAS CITY, Mo. (AP) — Most teams around the NFL are getting banged up and losing players at about this point in the season.

The Kansas City Chiefs are getting ready to welcome a whole bunch back.

Tops on the list is first-round pick Trent McDuffie, who earned the start at cornerback for Week 1 but who promptly hurt his hamstring in a win in Arizona. McDuffie was placed on injured reserve and returned to practice last week, starting a window in which the Chiefs must either activate him or place him on the season-ending IR list.

He could be activated as soon as Sunday against San Francisco.

McDuffie could be joined on the field by starting linebacker Willie Gay Jr., who has spent the past week shaking off the rust following a four-game suspension for an off-the-field incident that occurred earlier this year.

It all gives Chiefs defensive coordinator Steve Spagnuolo his most complete bunch since breaking training camp.

“Both of them looked good to me,” Spagnuolo said Thursday. “I go off what (Chiefs trainer) Rick Burkholder says in Trent's case, and Willie is just a ball of energy. He can be at 100 miles an hour, no matter what. He's rusty — he hasn't been here in a month. We have to shake that off. But we have to get them out there and get rolling.”

The Chiefs (4-2) have made do with fill-ins during a tough early part of the schedule.

At cornerback, where Rashad Fenton is nursing a hamstring injury, the Chiefs have relied on two other rookies in Jaylen Watson and Joshua Williams. And if you appreciate learning the ropes in a trial-by-fire manner, those two have faced the following QBs: Kyler Murray, Justin Herbert, Matt Ryan, Tom Brady, Derek Carr and Josh Allen.

They've certainly taken their lumps. Williams in particular had a tough night against Allen, getting burned for a couple of touchdowns in a 24-20 loss to the Buffalo Bills. But they've also gained valuable experience, and that should prove to be beneficial regardless of whether McDuffie returns this week or following Kansas City's bye.

In fact, given how little McDuffie has played this season, you could say Spagnuolo knows more about his other rookies.

“I do think he's a good football player. I don't think we would have inserted him (as a starter) if he wasn't,” Spagnuolo said. “You never know how a young guy is going to react to injury. He's fully in tune, though. He doesn't have to be at Saturday night meetings, but he wanted to be at every one. He would drive himself over. That's the kind of guys he is.”

The kind of player Gay is: fast and aggressive. And while Darius Harris filled in admirably at linebacker over the past month, the reality is Gay was in the starting lineup over him for a reason. He had 16 tackles in just the first two games.

“He brings a lot of speed,” Spagnuolo said, “but I will say this: I thought Darius did a nice job. Everybody has their strengths and their weaknesses, and Darius brought his assets, how hard he plays and how cerebral he plays. And with Willie, you've seen Willie — he runs around and makes explosive plays.”

Even without McDuffie and Gay, the Chiefs have been a middle-of-the-pack defense, despite facing some of the league's top offenses; holding the Bills to 24 points was quite a feat. But the hope is that getting two of their better players back on the field will allow the Chiefs to become one of the league's best during the second half of the season.

“I think the guys are playing good,” Spagnuolo said, “but I hope we're getting better at the end.”

NOTES: RG Joe Thuney (ankle) and DE Mike Danna (calf) returned after missing Wednesday's practice. ... Special teams coach Dave Toub acknowledged the struggles Kansas City has had in the return game so far this season. “We're behind where we need to be right now,” he said. “I'm not really ever satisfied in the return game, but punt and kick return, we have to be better.” ... Offensive coordinator Eric Bieniemy is likewise unsatisfied with the running game, which produced just 68 yards against Buffalo. “I'm not going to make any excuses,” he said. “Those guys just played better than we did.”