Chiefs still have room for improvement after AFC title romp 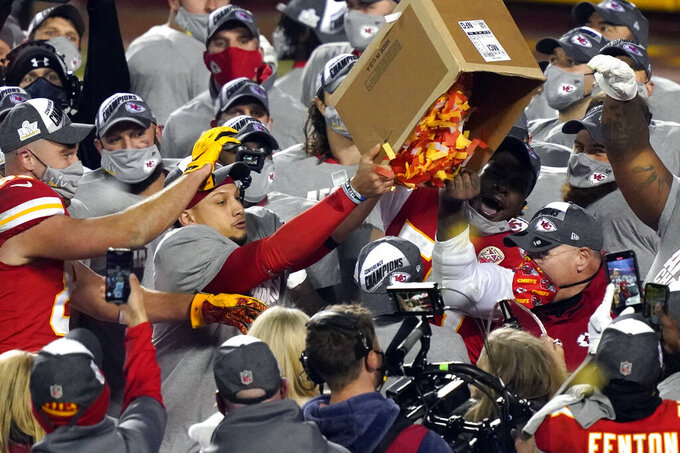 KANSAS CITY, Mo. (AP) — Travis Kelce has spent the better part of a month insisting the Kansas City Chiefs have yet to put everything together.

They still didn't in their AFC championship game win over Buffalo.

They came much closer than they have all season, though, and that could be a scary thought for the Tampa Bay Buccaneers as they prepare to face Kansas City in the Super Bowl. The Chiefs fumbled a punt near their goal line to hand the Bills an early touchdown, dropped a couple of passes, committed a couple of costly penalties and still won in a 38-24 rout.

“I mean, we've got room to get better,” said Chiefs coach Andy Reid, parroting the stance of his star tight end. “We had a couple of things that went a little haywhacky, but we stayed the course and did some good things. We did more good things than bad things. This job is a little like being a farmer; the work is never done.”

Well, it will be in two more weeks.

The Chiefs plan to spend the time between the AFC title game and the Super Bowl in Tampa, Florida, practicing at their facility near Arrowhead Stadium. They are tentatively planning to depart the day before the game because of the COVID-19 protocols, a big change from a normal year, when they would arrive at the site a week in advance.

It also means a much quieter two weeks to iron out those remaining issues, far away from the harsh glare and the intense spotlight that comes with preparing amid the typical Super Bowl circus.

“The first week is similar to what you had last year. The one thing you'll minus is the long travel day, the media deal — that thing,” Reid said. “You still have it but it's right here at home. Where you might lose a day, you don't necessarily lose a day on this. But you still have a tremendous amount of obligations to the media and you have to work your schedule around it so it fits. The second week, it's a little bit of a challenge."

One the Chiefs have experienced, though. They returned almost intact from the team that beat the 49ers in the Super Bowl last year, which should help to offset the advantage that Tom Brady might otherwise bring to the Bucs.

“I can't put my finger on it. It's almost like, a little more exciting,” Kelce said. “I feel like last year, it was a question of whether or not we belonged, and this year, ‘Let’s go out and prove we are who we are,' and the resiliency — how we're going to handle adversity. I just love this team, man. ... I can't wait to go down to Tampa and give them our best shot.”

Every facet of the offense was in synch on Sunday. Mahomes had time in the pocket and was mobile enough on his ailing toe when he was flushed from it. Kelce and Hill made mincemeat of the Buffalo secondary. Clyde Edwards-Helaire and Darrel Williams scored on the ground, a good sign for a team that has struggle to get touchdowns in the red zone.

The return game has been iffy for weeks, and two bad plays stood out Sunday. Mecole Hardman’s fumble of a punt gave the Bills an easy touchdown and put Kansas City in a 9-0 hole, and the Chiefs were unable to hop on an onside kick near the end of the game.

Frank Clark is the highest-paid player on the roster — yes, higher than Mahomes — with a base salary of $12 million and cap hit of $19.3 million. Yet the defensive end had just seven tackles and two sacks over the previous seven games heading into the AFC title game. Clark came through against the Bills, though, twice sacking Josh Allen.

Sammy Watkins has been out with a calf injury since Week 16, and while he practiced in a limited capacity all week he was again inactive on game day. The Chiefs have proven they are just fine without their oft-injured wide receiver, and that means there's a good chance he won't get another $7 million contract from the Chiefs for next season.

The Chiefs will have to juggle their offensive line after left tackle Eric Fisher tore his Achilles tendon against the Bills on Sunday. That means Mike Remmers likely will shift from right tackle to left, Andrew Wylie will kick out to right tackle from guard, and Stefen Wisniewski will join center Austin Reiter and left guard Nick Allegretti on the interior of the line.

17: Reid moved into a tie with Hall of Fame coach Joe Gibbs for fourth on the NFL's career postseason wins list. Two more would tie him with Don Shula and a third with Tom Landry, though Bill Belichick is far-and-away the leader with 31 wins.

The Chiefs began film study of the Buccaneers early Monday, a day that is typically reserved for film study and rehab work with trainers. The reason is simple: Reid wanted to cram as much in as possible before things get busier later in the week.