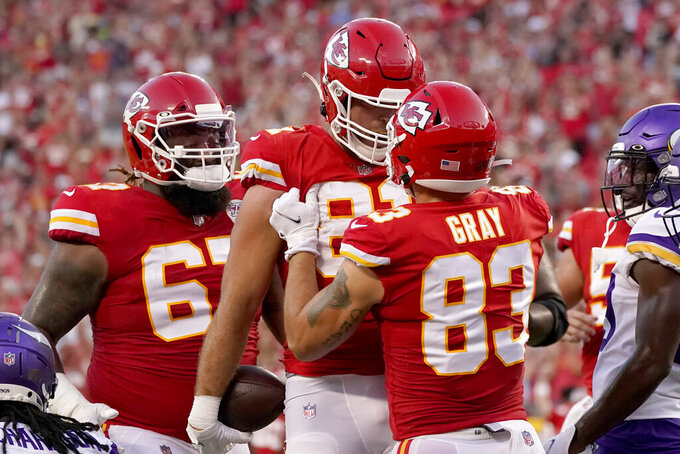 Kansas City Chiefs tight end Blake Bell (81) is congratulated by Noah Gray (83) and Lucas Niang (67) after scoring during the first half of an NFL football game against the Minnesota Vikings Friday, Aug. 27, 2021, in Kansas City, Mo. (AP Photo/Charlie Riedel)

The Chiefs could reach that number — or double or triple it — all by themselves this season.

The two-time defending AFC champions have long toyed with exotic personnel packages, a byproduct of the creative offensive mind of coach Andy Reid. They even kept four tight ends on the roster last year, though Ricky Seals-Jones only played six snaps all season and never with Travis Kelce and the rest of his cohorts on the field.

But the Chiefs foreshadowed the actual use of what teams refer to as a “14 package” — one running back and four tight ends — in their preseason finale against Minnesota, when Patrick Mahomes tossed a TD pass to Blake Bell at the goal line.

“Having those tight ends on the field that can run, block and catch, and then the offensive line that we've built here and how they're able to run the ball — I think that's going to put some defenses in some very tough positions,” Mahomes said.

As if the Chiefs don't cause defenses enough problems.

The Patriots were among the first teams to regularly use a four tight end look in 2015, when they paired Scott Chandler and Michael Williams with Rob Gronkowski and Michael Hoomanawanui.

But even then, the look was designed primarily for use at the goal line, where the extra tight ends could serve as blockers to get a running back into the end zone.

The Chiefs are taking the personnel grouping to another level.

Kelce is already one of the league's best pass-catching tight ends, and the Chiefs selected another pass-catcher in Duke's Noah Gray in April's draft. They've joined Bell, a former college quarterback with marvelous hands, and Jody Fortson, who also played quarterback before spending most of his career at wide receiver and only recently becoming a tight end.

In other words, the Chiefs have four tight ends with soft hands, each capable of catching passes downfield.

The problem that creates for defenses is quite simple: “They either have to put a lot of people on the field to stop the run,” Mahomes explained, “or they have to find a way to stop those guys who can catch the ball like a receiver.”

The only downside? Keeping four tight ends on game day means losing a backup player at another position.

“We were already dangerous before I was activated. I think we just got a little more dangerous, to be honest with you,” Fortson said. “It gives us the opportunity to form a lot of looks and create so many mismatches. It's going to be fun.”

Not for Cleveland coach Kevin Stefanski, who gets the first crack at solving the riddle when the Browns visit the Chiefs on Sunday for a rematch of their divisional-round playoff game.

Coincidentally, the Browns ran two of those 11 plays across the entire league last season in which a team had four tight ends on the field.

They weren't the Chiefs tight ends, though.

“We're just keeping the best players. They do have roles. They deserved their roster spots,” Chiefs general manager Brett Veach said, “and obviously to us, we've been looking for a third or fourth tight end. To get Blake in the offseason, draft Noah, have Jody have such a great camp — we've been on the other side knowing what it takes to have great tight ends.”

Now, even though the Chiefs can unleash their four tight ends anywhere on the field, the very nature of the set means it's the most damaging in short-yardage situations. And that includes the along the goal line, where despite all of their firepower the Chiefs were a middling 58.9% in scoring red zone touchdowns last season.

Four tight ends? That just might be the ultimate off-speed pitch.

“We have a lot of mismatch problems," Kelce said. “We have great athletes, especially the two young guys coming up and being very professional early on in their career, taking notes and figuring things out. It's going to be fun.”

NOTES: FS Tyrann Mathieu remained in the COVID-19 protocol Wednesday. He needs to return two negative tests 24 hours apart before Sunday to be cleared to play against Cleveland. “If he can go, he'll go. If he can't, he can't,” Reid said. “I'm told his tests are getting better.” ... DE Frank Clark (hamstring) returned to practice Wednesday. C Austin Blythe (sports hernia) remained out. ... RB Clyde Edwards-Helaire (ankle) said he could have played in the Chiefs' preseason finale but stayed out as a precaution. “I'm 100 percent healthy and right now I'm ready to go,” he said.