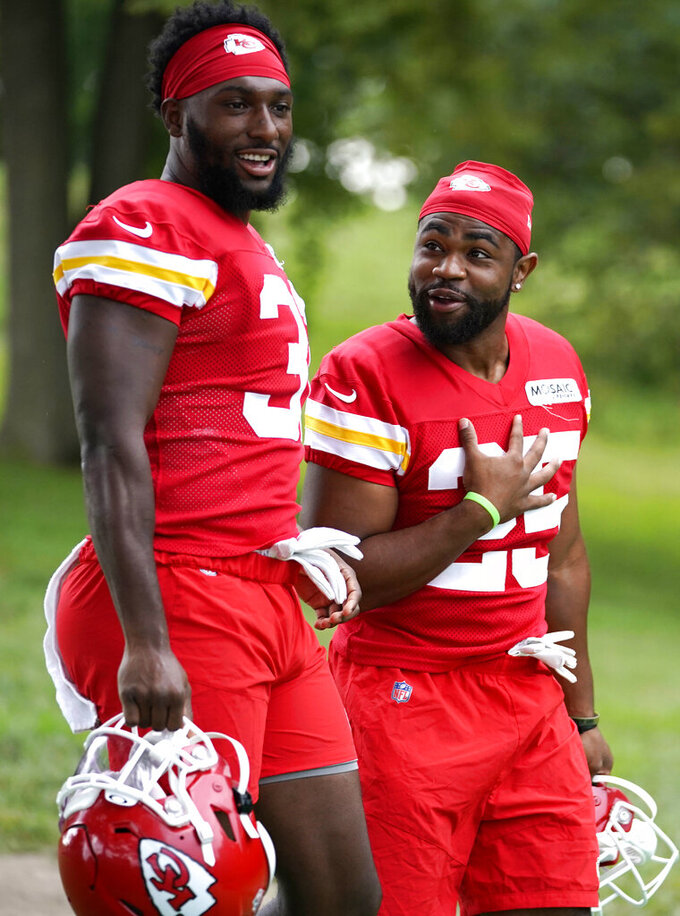 KANSAS CITY, Mo. (AP) — The Kansas City Chiefs released veteran defensive end Taco Charlton, offensive lineman Bryan Witzmann and defensive back Will Parks on Monday as they made the next round of roster cuts ahead of their preseason finale.

Charlton was a first-round pick of the Cowboys in the 2017 draft, but he's been unable to break into a consistent role in the NFL. After not working out in Dallas he was claimed by the Dolphins in 2019, then signed with the Chiefs prior to last season, eventually appearing in seven games with a pair of sacks and a forced fumble.

Yet even with his college teammate, Frank Clark, providing some guidance on the other side of the defensive line, Charlton was unable to make enough of an impact to carve out a spot on the Chiefs roster for the upcoming season.

“Listen, Taco is going to play in this league. He's too good of a player not to,” Chiefs coach Andy Reid said Monday. “It just didn't work out in this case. The way these cuts are set up, it's a little different than years past, so you have to make these decisions. I'm hoping he hooks up with someone or eventually comes back here.”

One of the reasons the Chiefs felt comfortable cutting Charleton loose was that the experiment of moving Chris Jones from defensive tackle to defensive end has proven seamless. Jones dropped some weight and improved his quickness in this past offseason, and he's been able to translate that into plenty of quarterback pressure in limited preseason snaps.

“I’m a veteran in the room," Jones said, "but I feel so good rushing off the edge. So my thing is to continue to get 1 percent better throughout this camp, and when we do that by the time the season reaches, we just keep on elevating baby, keep on elevating, and we’re going to be where we want to be by the end of the year.”

The Chiefs also have high expectations for second-year pro Mike Danna, who has carved out a backup job behind Clark, and Joshua Kaindoh, whom they chose in the fourth round out of Florida State this past April.

Then there's the fact that Jarran Reed, one of their important free-agent acquisitions, has played well in the middle of the defensive line. That has kept the Chiefs from being tempted to move Jones back to his previous spot up front.

“I mean, they're communicating well,” Reid said. “As much as the offensive lines move, you have to move and just do it, and they're playing strong in there right now. We have to keep growing. We have to keep getting better. But we will.”

Improved performance on the defensive line is important for the Chiefs this season. They struggled against the run much of last season, and they were particularly poor on defense when it came to defending the red zone.

“Coach Reid and the rest of our coaching staff put together a plan for us to get more reps in the red zone, so all you can do is go out there and work at it," said Chiefs linebacker Anthony Hitchens. "That’s the forefront of our mind right now, so just getting better in all areas, especially in the red zone.”

Witzmann started 13 games for the Chiefs in 2017, then spent the next two seasons with the Bears and Panthers. He returned to Kansas City last season, when injuries ravaged the offensive line, but appeared in just one game. And it became difficult to earn a spot this season when the Chiefs completely reworked their offensive line.

Parks was brought in to provide experience in the secondary, but became expendable with the emergence of young players such as Devon Key. The Chiefs chose to release him ahead of final cutdowns to give him a chance to sign elsewhere.

In other news, Chiefs wide receiver Tyreek Hill practiced Monday after missing last weekend's preseason game in Arizona with a tight hamstring. But running back Clyde Edwards-Helaire, who sprained his ankle early in the game, was still trying to get the soreness out of it after a walkthrough Monday morning and could miss practice time this week.

The Chiefs play their preseason finale — and only home preseason game — against the Vikings on Friday night.

“It'll be great to be back at Arrowhead Stadium and with our fans there,” Reid said. “I know they're looking forward to it and the players are, even though we had a small number last year. It'll be good to get that place packed up. There's no better venue in the NFL than Arrowhead Stadium.”