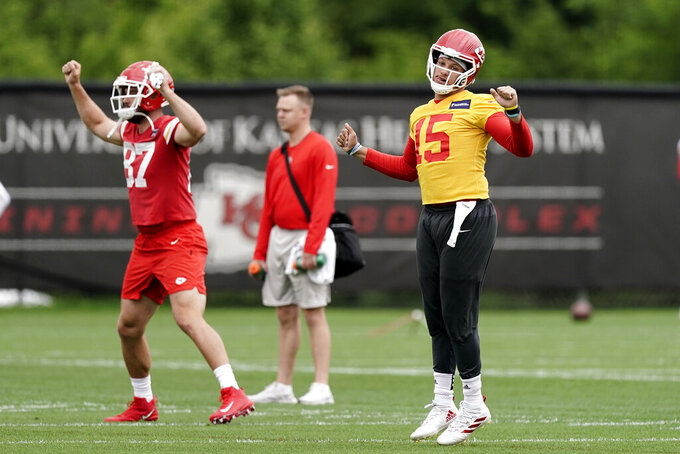 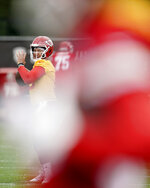 KANSAS CITY, Mo. (AP) — The moment the Kansas City Chiefs traded Tyreek Hill to the Miami Dolphins for a package of draft picks, any notion the AFC West champions would be able to simply build on another deep playoff run went right with him.

It's not easy to replace a three-time All-Pro wide receiver, one of the most dynamic players in the entire game.

The deal earlier this offseason set in motion events that have left the Chiefs in an intriguing position as they hit the meat of their voluntary summer workouts: They've rebuilt their pass-catching corps into a more well-rounded and arguably more difficult-to-defend bunch while also updating — and perhaps upgrading — their playbook to better fit their personnel, and in particular those big, rangy wide receivers that are now on the roster.

“We've got a lot that we've shown over the years here. We've covered a lot of bases with the volume of plays that we've had,” said Chiefs coach Andy Reid, who's been able to count on having Hill and Co. in the locker room the past few years.

Not only has Hill left town, so have fellow wide receivers Demarcus Robinson and Byron Pringle.

In their place, the Chiefs signed former Steelers standout JuJu Smith-Schuster, who is trying to bounce back from an injury-plagued finish to his time in Pittsburgh; Packers deep threat Marquez Valdes-Scantling, who goes from catching passes from Aaron Rodgers to getting them from Patrick Mahomes; and Skyy Moore, their second-round pick in April's draft.

“We're able to dust a few things off," Reid said, “and put them back in that are maybe more conducive to a bigger player.”

And that has Reid excited about the possibilities ahead.

It's not as if he wants to throw away everything the Chiefs have accomplished the past six years, though. The worst they've finished in both yardage and scoring over that span is sixth, and twice Kansas City has led the league in total offense.

Those are big numbers to replace, which is why Reid and general manager Brett Veach don't expect one player to do it.

“We’ve got a little bit of everything for everybody that we can draw from," Reid explained. "We dusted a few things off for the bigger guys that we think they do well after watching their tape. ... I can’t tell you what they are, but we’ll put them in.”

Mahomes acknowledged the different feel of walking into the practice facility this offseason, and that a certain degree of familiarity that had built up over the years was missing. But he knew that would be the case, and that's why he invited most of the newcomers to his home in Texas for voluntary workouts even before the team began its own practices.

When they congregated again in Kansas City last week, they were that much further ahead.

“I think we’re going to be different," said Mahomes, who is fresh off a loss with partner and Bills quarterback Josh Allen to the Packers' Aaron Rodgers and the Buccaneers' Tom Brady in a primetime golf match Wednesday night.

"I think having all those guys, it’ll help get those big throws that we’ve become accustomed to.”

It's a different approach, to be sure, but one the Chiefs hope produces the same results.

“That's the excitement in my mind,” Kelce said. "Teams are going to have to see how we’re going to come out and attack them. With a guy like (No.) 15 out there, who knows where to go for the ball. I think it can be an advantage, for sure.”