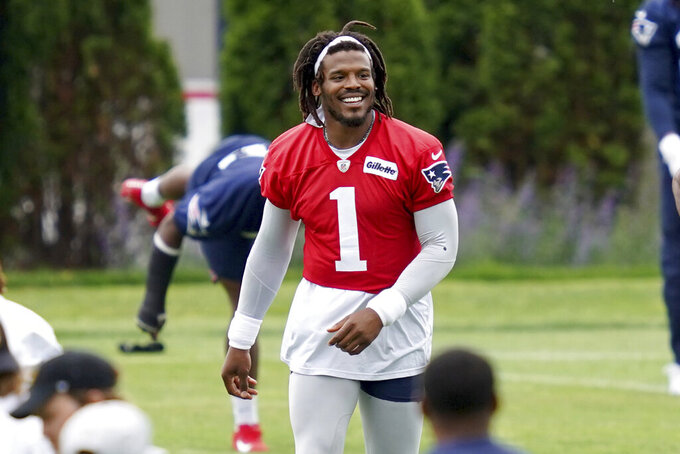 FILE - New England Patriots quarterback Cam Newton (1) smiles during NFL football practice in Foxborough, Mass., in this Friday, June 4, 2021, file photo. Cam Newton will enter Patriots training camp as New England’s starting quarterback. Coach Bill Belichick made that clear multiple times this offseason. But the coach says, that like all positions, who has the job at the end of camp is an open question as the Patriots prepare to open their second camp since Tom Brady's departure. (AP Photo/Mary Schwalm, File)

But he said Tuesday that, like all positions, who winds up with the job at the end of camp is back to being an open question as the Patriots prepare to open their second camp since Tom Brady's departure.

“Every one of us has to go out and establish our level of performance in whatever our role or capacity is,” Belichick said. “It’s a new season. “We’ve done some things in the spring, but this is really the start of football season in terms of the team-building part here of training camp. We all have a lot of work to do. That includes all of us. Until we go out and do anything then I would say it’s pretty much a clean slate.”

It’s not an unexpected stance from Belichick, who drafted Alabama product Mac Jones with the 15th overall pick in April’s draft, making him the first quarterback selected in the first round during Belichick’s 21-year tenure in New England.

Jones had a solid minicamp and has seemed to fit into a culture that closely mirrors what he played in during college. His approach to getting his first taste of an NFL offensive system this spring was lauded by both the coaching staff and his fellow quarterbacks.

Newton said during minicamp last month that he wasn’t surprised Belichick took a quarterback in the draft and fully expects to get competition from everyone in the quarterback room.

Jones will also have more opportunities to impress his coaches early in camp, with only three of the quarterbacks healthy enough to practice. Newton and veteran Hoyer will be on the field with Jones, but third-year QB Stidham will begin camp on the active/physically unable to perform list.

How long Stidham will be out is unknown. It’s unclear what his injury is because he was present for both the voluntary and mandatory portions of the offseason program.

The Patriots will also be making adjustments elsewhere on the field.

Belichick confirmed that Cole Popovich, who served as co-offensive line coach in 2020, is no longer with the team because of an issue related to the NFL’s COVID-19 protocols. Belichick didn’t say what the issue was specifically. But Carmen Bricillo, who shared the O-line coaching duties with Popovich last season, will now handle the position on a solo basis.

Center David Andrews said he respects whatever issue Popovich had in not complying with the league’s guidelines and has confidence the team will be able to adjust without him.

“We’re going to come to work no matter who is the room,” Andrews said. “That’s just part of it. … I think everyone has jobs where maybe they don’t agree with something or don’t like something. But it just kind of is what is. We can’t sit there and dwell on that. Our job is to come in here and work and try to be the best football team we can be.”