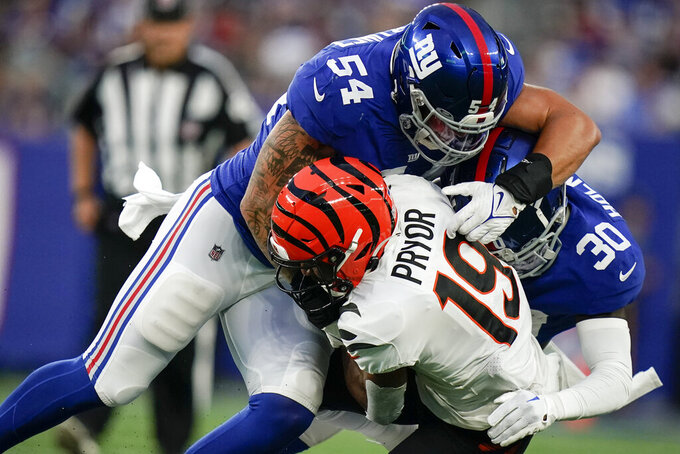 EAST RUTHERFORD, N.J. (AP) — There are some topics New York Giants coach Brian Daboll is not going to shed much light on.

Injuries and the release of players such as veteran Blake Martinez are high on his list.

Daboll said little on either topic Monday as the Giants started to prepare for their season opener in Tennessee against the Titans.

The Giants surprisingly released Martinez on Thursday after the team finished practice for the week. There was no comment at the time from either Daboll or general manager Joe Schoen about why their leading tackler from 2020 was let go or whether it had to do with the ACL injury he sustained early last season.

“All I’ll say is every decision that we make regarding releasing a player is always a difficult decision,” Daboll said Monday. “Just like all our guys, I’d say good luck to Blake and the rest of the guys that we released; and we’re looking forward to getting ready on our preparations for Tennessee.”

Daboll, who replaced Joe Judge as coach in January, repeated his original answer when pressed for a reason for the move.

Coming off a 4-13 season, Daboll was tight-lipped about the team's injuries heading into Sunday's game. He would not say who will start at left guard for the injured Shane Lemieux (foot). He also said starting outside linebackers Azeez Ojulari (leg) and rookie Kayvon Thibodeaux (knee) are day to day when asked if they would play.

Daboll said offensive coordinator Mike Kafka would continue calling the plays, as he did in the preseason. Daboll had called offensive plays the past four seasons as a coordinator with the Buffalo Bills.

If there is an advantage the Giants have coming into the season, it's most opponents don't know what to expect.

Titans coach Mike Vrabel said he will look at what Daboll used at Alabama, Buffalo and New England, and take a glance at Kafka's work in Kansas City.

“So these guys have been around good offenses,” Vrabel said. "We’ll have to be ready for everything. It’s the opening week”

Two-time All-Pro safety Kevin Byard said the Giants probably won't use anything the Titans have not had experience playing against.

The most important thing for the Giants now is being fundamentally sound and following the rules the staff has installed since organized team activities began in the spring, Daboll said.

“Each team evolves every year based on their personnel,” the rookie head coach said. “They have new personal. We have new personnel. So, I’d say it’s a normal get ready for Week 1 even though we’re a new staff. I don’t want to speak on how they’re doing it. They’ve been real successful with how they’ve done things. ”

The Titans have been to the playoffs the past three seasons. The Giants have not had a winning season since 2016, the only time they made the postseason since winning the Super Bowl in February 2012.

NOTES: Rookie wide receiver Wan'Dale Robinson lives in Kentucky and played at Kentucky, and has gotten more than 10 ticket requests from family and friends in Frankfurt. “It’s really about like 3 1/2 hours,” the second-round draft pick said. “This will be the biggest one that I have with the support system around.” ... Tackle Evan Neal, the No. 7 overall pick in the draft, said his parents are making the trip from Florida to see to his NFL debut. ... The Giants released DB Harrison Hand from the practice squad and added veteran DB Fabian Moreau. ...Daboll said backup quarterback Tyrod Taylor (back) is ready to return to work this week. He was injured in the preseason finale against the Jets.