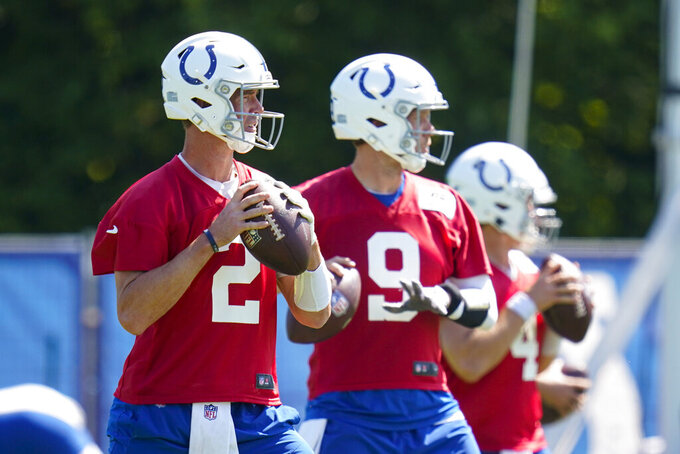 First, he and his players couldn't wait for practice to start. Now, everybody can't wait to go home.

Nearly a month after first arriving at their summer training complex on the city's northwest side, the Colts finished a relatively uneventful camp with a light, indoor workout before packing up and heading to the team's permanent headquarters.

“It was pretty good,” said quarterback Matt Ryan, comparing this camp to his first one in Atlanta. “Probably of all the camps, probably the most similar — just being in a new spot and adjusting to new things, whole new staff, entirely new players. So, there’s probably some similarities to it.”

Breaking in a new quarterback has become an annual rite for the Colts. If Ryan stays healthy through Saturday's preseason finale against Tampa Bay, he'll be Indy's sixth different opening-day starter in six years.

At least this summer, football remained the primary focus in Westfield, Indiana.

A year ago, Carson Wentz and three-time All-Pro guard Quenton Nelson missed most of camp with a broken foot. Andrew Luck's injuries were all the talk from 2017 through his sudden retirement in 2019. In 2020, the Colts worked at their home complex and without fans because of COVID-19.

This time, they nearly made it through unscathed.

Sanchez's absence creates an even larger void because he also served as Indy's kickoff specialist and the holder on placekicks. It's unclear who might take over those additional duties.

Starting center Ryan Kelly missed the final two workouts after testing positive for COVID-19. The Colts got more promising news on Thursday about second-year defensive end Kwity Paye, one day after he exited practice early with what appeared to be a left knee injury.

“When he first went down, it just looked like bang, just a little hyperextension,” Reich said. "The MRI, everything looked pretty good. So, we’ll play it cautious. It's banged up a little bit, a little bit sore, but just give him some rest and he should be hopefully good to go for the opener.”

What else did the Colts learn over these past few weeks? This year's rookie class could be quite productive.

Reich also tweaked the schedule in hopes of a faster start.

Instead of holding their customary mid-morning workouts, practices typically began around noon and they stayed at camp longer than most other teams. The Colts reported to camp on July 26.

“With the number of guys we have and the setup we have, it just makes sense to stay up here (longer),” Reich said. “The players like it up here, the coaches like it up here. It saves our practice fields back home for another week and that really matters because they get eaten up pretty quick.”

And that's where the Colts return early next week.

“We put in a lot of hard work during OTAs, but when you have this expanded schedule during training camp and you really get to spend a long day together, five, six, seven days a week, you accelerate that part of it,” Ryan said, referring to getting on the same page. "I think it’s been great. I feel like we’re in a really good space right now.”