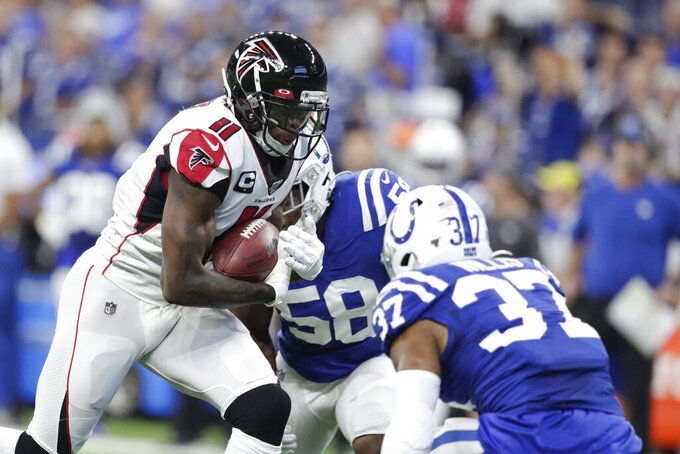 He's not the least bit concerned about the Colts' defense.

Instead, Reich draws on his NFL experiences to provide perspective and motivation for a group of players who could use a boost right now.

Indy's defense heads into Sunday's game against Oakland (1-2) ranked in the bottom half of the league in yards rushing, yards passing and total yards allowed. Only six teams have fewer takeaways than the Colts' three and last week Indianapolis allowed the Falcons to convert eight of 10 third downs.

Again, the Colts (2-1) won't be at full strength. Starting safety Malik Hooker could miss more than a month with an injured knee, All-Pro linebacker Darius Leonard was still in the concussion protocol this week, and after No. 1 cornerback Pierre Desir fought his way back from a bruised knee last week, he's now dealing with an injured hamstring.

The Raiders pose an intriguing matchup. While their offense has struggled through the first three weeks, Indy can put on the tape from last year's 42-28 shootout and see just how dangerous Oakland can be.

Or the Colts can listen to coach Jon Gruden giving his team a similar message about getting back on track.

"I'm not going to sit here and say that we are a finished product yet," Gruden said. "We've gone through a lot of change through the first three weeks and we played two really good teams, actually three really good defenses."

And the Colts think they can make it four good defenses in a row.

"Just keep believing, keep trusting and keep working, the breakthrough is just around the corner," Reich said. "That's our mentality."

The Raiders will go straight from Indianapolis to London, where they will spend the week practicing before a "home" game against Chicago. Oakland is in the midst of a stretch that features 48 days between games at the Oakland Coliseum, with four road games, one off week, and the trip to London. This week marks the second of five straight games that start at 10 a.m. PT. Oakland has lost seven straight in the early Sunday time slot.

"It's an odd travel schedule I guess," tight end Darren Waller said. "But I feel like we have the guys to lock in and get it done."

Indy also has scored at least 23 points in nine consecutive home games, tied for the league's third-longest streak with the Los Angeles Rams and behind New England (13) and Kansas City (12). There's little doubt among the players the noise and atmosphere have helped.

"You felt the energy coming into the stadium and they played a big part in a tough game," Colts quarterback Jacoby Brissett said after last week's game. "I think they were one of the biggest difference makers in the game because it's so hard."

The Raiders are still looking for the right receiver combination after Antonio Brown was released two days before the season opener. That move forced Tyrell Williams into a bigger role, and another free agent receiver, Ryan Grant, didn't work out. The former Indy player was benched last week and released Wednesday.

"It's caused us a little bit of rethinking," Gruden said about the loss of Brown. "When you lose your starting (flanker), who arguably is a great player — I don't think anyone is going to dispute that — you have to replace him, and we're making an effort to move Tyrell around, bringing on some younger guys."

After being stout against the run the first two weeks, allowing 63 yards a game and 2.8 yards per carry, the Raiders gave up 211 yards last week to Minnesota. The Raiders face another strong test this week against Marlon Mack , the league's No. 3 rusher, and a Colts team averaging 4.9 yards per carry. Mack ran 16 times for 74 yards and one TD last week, but gashed the Raiders last year for 132 yards and two scores.