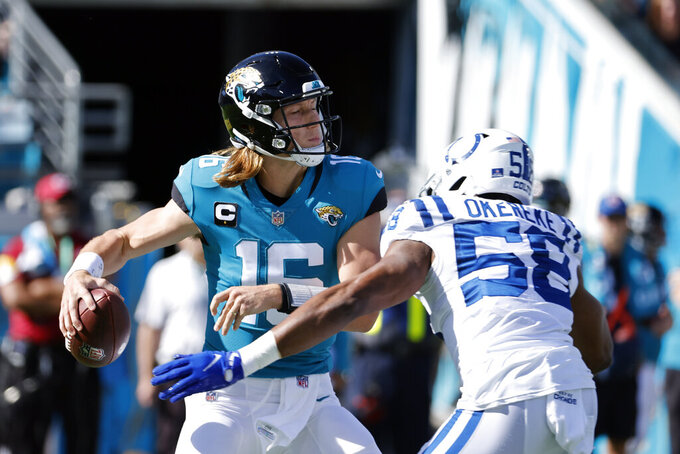 Indianapolis Colts middle linebacker Bobby Okereke (58) puts pressure on Jacksonville Jaguars quarterback Trevor Lawrence (16) as he looks for a receiver during the first half of an NFL football game, Sunday, Jan. 9, 2022, in Jacksonville, Fla. (AP Photo/Stephen B. Morton) 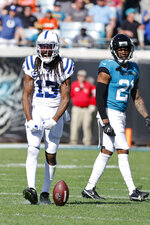 He seems equally confounded by Indy's 2-5 record in one-score games in 2021.

Five days after the Colts were eliminated from the playoffs with an embarrassing loss at Jacksonville, Indy's general manager was searching for answers.

“You have to finish with a better record in one-score games,” Ballard said Thursday. “Ultimately, it falls on my shoulders and we’re going to go to work and ask some very tough questions over the next month, month and a half to fix it.”

Ballard declined to discuss specific personnel moves or potential coaching changes during his traditional season-ending news conference. Yet he understands finding solutions is the key to the offseason.

Indy started the year by losing its first three games and closed it out with two straight losses when a win in either game would have clinched a playoff berth. The Colts finished 9-8.

That wasn't good enough for team owner Jim Irsay, who sent a letter to fans on Wednesday in which he described the Jacksonville loss as “perhaps the worst way possible" to end a season.

“The buck stops with me and this experience makes me even more determined to bring Indiana a contending team,” Irsay wrote. “We are already working toward the future, and I’m going to do whatever it takes to put us in a position to win next year and for years to come.”

It appeared Indy was already there this season after putting together one of the league's most proficient rushing offenses, an offensive line with two Pro Bowlers and a defense that allowed the ninth-fewest points while producing the second-most takeaways with 33.

On paper, that's a team that could reach the Super Bowl.

The problem: Indy also finished 25th in sacks with 33, and the passing game was inconsistent behind first-year quarterback Carson Wentz.

Although Ballard acknowledged both areas need to be better next fall, there is renewed hope.

Despite missing most of training camp, another week of practice leading into the season opener because of COVID-19 and playing through two sprained ankles, Wentz revived his career by throwing 27 touchdown passes with seven interceptions. It was a dramatic improvement over his disastrous final season in Philadelphia.

And when Frank Reich begins his fifth season as the Colts' coach, it will likely mark the the first time he's working with same starting quarterback for a second consecutive year.

“(It takes time) to learn the offense, to really understand the nuances of it, the timing and the rhythm of the throws, working through progressions — we’ve had none of that," Reich said Monday, explaining the benefit of offseason workouts. “I would love to get to the point where we can have a normal offseason and that we’re able to find a way to get players in the building to work in our schemes and get better."

The Colts need more than just extra time on the field, though.

Ballard said he hopes to improve the receiving corps, the pass rush and Indy's overall depth, even as he waits for four-time Pro Bowl receiver T.Y. Hilton and two-time Pro Bowl tight end Jack Doyle to decide whether they'll return next season or retire. He also must decide whether to bring back left tackle Eric Fisher after an inconsistent, injury-filled first season in Indy.

But Ballard also believes a modified approach could help Wentz — and the Colts — take another big step.

“I talked to Carson about this (Wednesday) and said let's make the layups,” Ballard said. “The throw against Arizona was incredible, there might be two or three other guys in the league who can make that throw. But let’s make the layups. Sometimes when you carry that burden, that you have to make a big play all the time, let the team help you.”