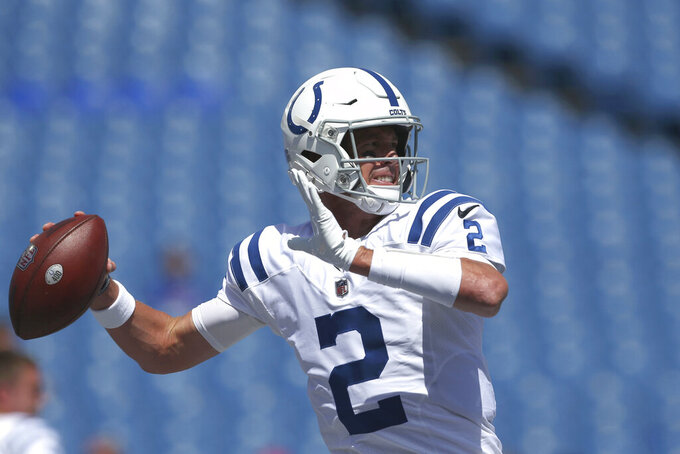 Indianapolis Colts quarterback Matt Ryan (2) warms up on the field prior to a preseason NFL football game against the Buffalo Bills, Saturday, Aug. 13, 2022, in Orchard Park, N.Y. (AP Photo/Joshua Bessex) 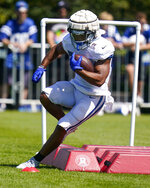 INDIANAPOLIS (AP) — The Indianapolis Colts would rather not play numbers games.

One playoff win in seven seasons simply cannot be ignored, though.

The next chapter begins Sept. 11 in Houston, just eight months and two days after an inexplicable season-ending loss at Jacksonville left Indy out of the playoffs for the second time in three years.

It was clear almost immediately big changes were coming.

Ballard started by dealing Carson Wentz after one season then shrewdly got Ryan, the NFL's 2016 MVP, for a third-round draft pick when Atlanta entered the Deshaun Watson sweepstakes.

But this time feels different.

While Luck was plagued by injuries over his final three NFL seasons and Rivers stayed only one year before retiring, Colts owner Jim Irsay already has said he'd like to keep Ryan for multiple years.

Colts players also have embraced the experience and leadership Ryan brings, just like Rivers. But, unlike Rivers, Ryan has the advantage of going through the typical offseason routine — all of the spring workouts, private offseason sessions, a full training camp and even a full preseason.

The results are promising.

“Matt Ryan has been everything we hoped and dream for. I know how happy the whole organization is, having his leadership going into the season," Irsay said last week. “We’re really, really excited. I think we have a reason to be.”

The other big component is the defense.

If Gilmore stays healthy and plays as aggressive as he's looked in training camp, he'll shore up a secondary that struggled at times last season, too.

And if defending NFL rushing champ Jonathan Taylor can replicate his breakout season, the Colts may finally have the combination to start winning postseason games.

“We’ve got to maximize the time that we spend out here because before you know it, we’re going to look up and be in Houston and we’re going to be keeping score,” Ryan said. "The good teams, the teams that develop this time of the year are the ones that can do that and I certainly think we have the guys to do it.”

Perhaps the biggest obstacle to winning in the playoffs recently has been Indy’s early season woes.

While the Colts rebounded from a 1-5 start to make the 2018 playoffs, the final two losses in 2021 prevented them from duplicating that feat last year. So Irsay has shifted his focus from eight straight Week 1 losses to a better overall first two months.

“We can sit and talk about the strange occurrence that has happened even with Andrew Luck teams and teams that have been good,” he said of the opening day skid. “But we’re just kind of focused on this year, saying let’s go play our best football and let’s get it done instead of me ranting here for the next 10 minutes. That hasn’t seemed to work in the past.”

Last year, Indy finished second in the NFL by forcing 33 turnovers. This year, they expect more.

Through the first two preseason games, the Colts have six takeaways — all with three-time All-Pro linebacker Shaquille Leonard on the physically unable to perform list following back surgery in June.

It’s not happenstance. New defensive coordinator Gus Bradley expects to get more aggressive with Ngakoue and Gilmore, and it's paying dividends.

“The previous defensive staff did a great job preaching that and now they have that mindset," Bradley said. “When you play hard and you're physical, sometimes things like that happen.”

Ballard filled three glaring needs with his acquisitions and another by using his first draft pick on Alec Pierce.

Other questions remain. It appears Matt Pryor has won the starting left tackle job and Danny Pinter appears to be the replacement for Mark Glowinski at right guard. Their play will help determine how Taylor performs.

But the Colts still need to figure out how to replace retired tight end Jack Doyle, how to get more productivity from receivers other than Michael Pittman Jr. and choose a kicker.