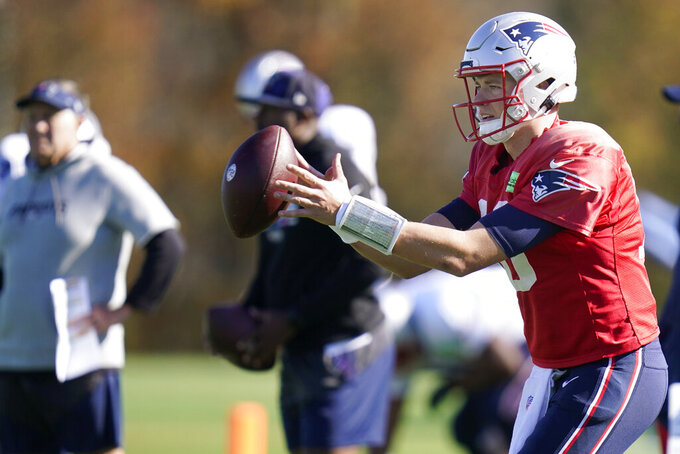 FOXBOROUGH, Mass. (AP) — The Indianapolis Colts and New England Patriots meet for the second straight year with their seasons at a crossroads.

Last year, both were coming off bye-week breaks entering Week 15 when the Colts — 7-6 at the time — hosted a Patriots squad that was 9-4 and riding a seven-game winning streak. The Colts rallied behind a 170-yard rushing performance from Jonathan Taylor to pull out a 27-17 win.

But Indy couldn’t ride the ripples of that victory and dropped two of its final three games, missing the playoffs. The Patriots’ loss started a stretch during which they lost three of four to end the regular season. They made the playoffs, but were blown out in the wild-card round by Buffalo.

The circumstances are a bit different entering Sunday’s matchup — yet the outcome could again have a lasting impact on both teams’ prospects.

“Every week’s a challenge in the NFL,” said Patriots coach Bill Belichick, whose team is 4-4 and has won three out of four, but finds itself in last place in the AFC East.

The Colts (3-4-1) are still adjusting after coach Frank Reich benched quarterback Matt Ryan last week and started second-year Sam Ehlinger. Reich shook things up more on Tuesday, firing offensive coordinator Marcus Brady in hopes of jumpstarting a unit that has scored 17 or fewer points in five of its past seven games.

“Sometimes it’s just right for a change and there’s something that makes sense for the team,” Reich said.

Meanwhile, Patriots quarterback Mac Jones is coming off earning his first victory since returning to the lineup following a three-week absence due to an ankle injury.

But New England’s offense has managed just one touchdown in the two games since he returned and continues to struggle in the red zone.

The Patriots remain ranked 29th in the league in red-zone efficiency, scoring a TD on just 11 of 24 opportunities. New England is also tied with Indy and New Orleans with an NFL-high 16 turnovers through Week 8.

“The ball is No. 1. We have to do a better job with that, and I do, too,” Jones said. “But they’re part of the game. You just have to move on from them. We’re trying to identify how we can be better, and that’s the important part.”

Another big factor in the Patriots’ issues has been the recent inconsistency of their offensive line.

Jones was sacked six times by the New York Jets last week and hit a total of eight times. There is no guarantee things will be better against Indianapolis.

Starting center David Andrews is out for a second straight game as he works his way back from a concussion. Rookie left guard Cole Strange was benched during last week’s game following a pair of holding penalties and allowing a sack. And right tackle has recently been a revolving door between Isaiah Wynn and Marcus Cannon. Cannon was added to the injury list on Thursday with a concussion as also out Sunday.

Left tackle Trent Brown is tied for second in the league with seven penalties, but has also played every snap this season after missing eight games in 2021.

Belichick’s game plans have caused all sorts of problems for former Colts quarterbacks such as Peyton Manning and Andrew Luck and many other stars. So how will Sam Ehlinger prepare for his matching wits with one of the game’s greatest defensive minds?

Even after the firing of Brady, the trade of running back Nyheim Hines and addition of running backs Zack Moss and Jordan Wilkins, Ehlinger isn’t changing a thing.

“It just comes down to having a routine that stays the same regardless of the circumstance,” he said. “So for me, when I was the No. 3, it was the same routine as it is now. So, regardless of things changing, I’ve kept everything the same and it’s provided stability for me.”

Ehlinger’s running ability gave the Colts a different dimension and it may have helped them find a solution for the offensive line struggles. Through eight games, the Colts have given up 26 sacks, 66 quarterback hits and used five starting lineups.

Indy also ran the ball more effectively last week. But they'll have to find the balance they've been seeking without Taylor. The defending NFL rushing champion didn't practice this week and is out with an ankle injury.

“I do feel like our protection has been pretty good the last few weeks,” Reich said. “The run game last week was better, not where we want it to be. We’ve had the changing dynamics there. ... Are we heading in the right direction? I do feel like we are.”