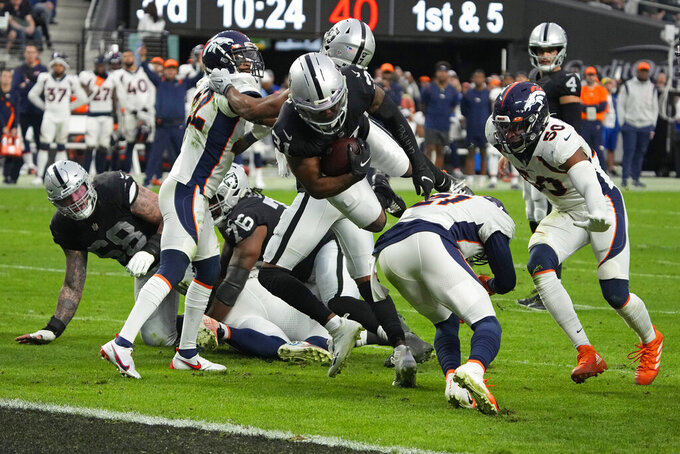 Las Vegas Raiders running back Peyton Barber (31) dives into the endzone for a touchdown against the Denver Broncos during the second half of an NFL football game, Sunday, Dec. 26, 2021, in Las Vegas. (AP Photo/Rick Scuteri)

INDIANAPOLIS (AP) — The Indianapolis Colts refused to concede anything after losing four of their first five games.

Neither did the Las Vegas Raiders amid an embarrassing email scandal and midseason coaching change.

Instead, both teams fought back and now find themselves in position to help clear the muddled AFC playoff picture.

The calculation is simple:

— If the Raiders win their final two games, they'll reach the postseason for the second time in 19 years.

— If the Colts win Sunday, they're in.

“We understand that and we know what’s at stake," Colts two-time All-Pro linebacker Darius Leonard said after being activated from the reserve/COVID-19 list Thursday. “We know we have to come out and play our best ball against these guys. We have to come in and we’ve got to play four great quarters of football if we want to make a playoff push."

The Colts (9-6) certainly have played well lately. They've won three straight, six of seven and eight of 10 to retake control of their postseason fate.

And if they do make the playoffs, Indy appears to be built for a deep run. They lean heavily on Jonathan Taylor, the NFL's leading rusher, one of the league's top offensive lines and a defense that has yielded 16.0 points over the last six games.

Quarterback Carson Wentz landed on the COVID-19 list Tuesday and then was activated on Saturday, but needs to test negative on Sunday before he could play. If Wentz doesn't make it back, rookie Sam Ehlinger will make his first NFL start after working all week with the starters while Wentz recovered from the virus.

“If he’s able to get himself back and ready, we’re confident in Carson," coach Frank Reich said. “I feel like we’re at a much, much better spot that we were in Week 3 when he didn’t practice. We have so many more practices and games under our belt. On the flip side of that, it’s a great opportunity for Sam."

Las Vegas (8-7), meanwhile, has been winning in spite of a struggling offense that has scored 17 or fewer points in four straight games.

Worse, Derek Carr already has matched his career high with 17 turnovers this season and the Raiders have had a league-high 17 giveaways and a league-low four takeaways over the past eight weeks.

It's a dangerous combination against a defense that ranks second in the league with 31 turnovers.

And as close as the postseason seems for Las Vegas, the one thing it cannot afford is another loss.

“We have two games left against two really good football teams and we need to win them," Carr said. “If we do and we get in, I think that would be pretty remarkable. I think that would be pretty amazing. But it falls in line with what our plans were at the beginning of the year and despite all the adversity, to be able to still stare your goals in the face and have an opportunity to obtain them, it’s pretty cool.

"But none of it matters unless we take care of business on the road here against the Colts."

The improving Raiders run defense is a key reason Las Vegas is in playoff contention. Two weeks ago, in a win at Cleveland, Las Vegas held Nick Chubb to fewer than 4.0 yards per carry. Last week, Denver rushed for 18 yards — the Raiders' lowest single-game total allowed since Buffalo had 13 yards Dec. 21, 2014.

This week, the challenge will be stopping Taylor.

“It’s a tall task," interim coach Rich Bisaccia said. “It’s a team that really concentrates on running the football, time of possession, those things. This will be the third week in a row we are playing against a really well-coached and really physical run game. We’ll show up and we’ll be expected to perform and play well.”

Receiver T.Y. Hilton, Indy's longest-tenured player at 10 seasons, knows this could be his final home game at Lucas Oil Stadium. He's just not pondering the thought.

“No, my mind does not think about that,” Hilton said.

The four-time Pro Bowler signed a one-year contract to stay in Indy last offseason and has again been slowed by injuries. Hilton doesn't plan to make a decision until after the season or after conferring with tight end Jack Doyle, Indy's second-longest tenured player.

Raiders running back Josh Jacobs had a breakthrough game by matching a career high with 129 yards rushing in last week's victory. It was his first 100-yard game this season and came courtesy of some better blocking, as well as Jacobs producing a season-high eight missed tackles, according to Pro Football Focus.