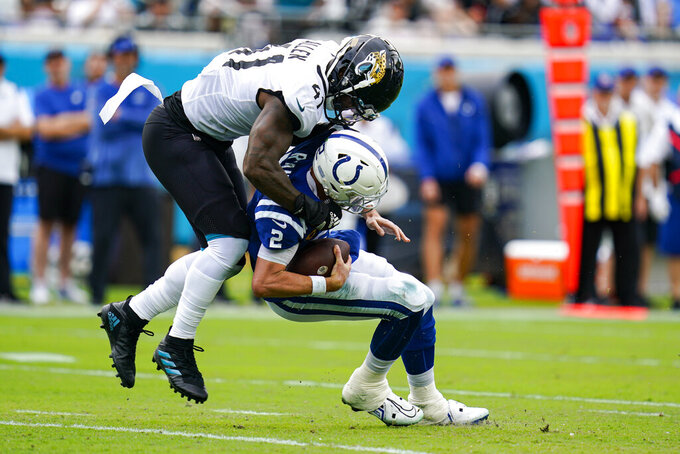 The three-time All-Pro doesn't talk to reporters often, but he made an exception Wednesday because he wanted to speak bluntly about Indy's most glaring problem: pass protection.

Through three games, the Colts have allowed 12 sacks, another 16 quarterback hits and pressure on nearly one-third of Matt Ryan's passing plays. It's nowhere near good enough for a line that prides itself on being one of the league's elite units and it's certainly not up to Nelson's standards.

“We're all about solutions and fixing issues and we know what the issues are,” Nelson said Wednesday. “We've addressed them and what needs to happen to play better to fix those issues. We're going to go try and do that to best of our ability at practice.”

The hope, of course, is better practices translate into improved play Sunday against two-time defending AFC South champion Tennessee (1-2). If not, it could be another long day for Indy.

Nelson, now a team captain, always seems to be part of the solution.

Until his arrival in 2018, the Colts' line was best known for its inability to protect quarterbacks. But after allowing 100 total sacks in 2016 and 2017, Indy has yielded 115, the league's third fewest, since Nelson's rookie season in 2018.

The Colts did it with a constantly changing cast of quarterbacks — Andrew Luck, Jacoby Brissett, 39-year-old Philip Rivers, Carson Wentz and now the 37-year-old Ryan. Last year, with Wentz, Indy gave up 32 sacks, tied for ninth fewest, while paving the way for Jonathan Taylor to win the rushing title.

This year has been different. Taylor struggled to find holes the past two weeks and Ryan is on pace to be sacked 68 times, a combination coach Frank Reich knows is unsustainable.

“We’ve got to get better at it,” Reich said. “We've got to execute better, got to communicate better. Last week, with the free runners it was really a mental error, it wasn’t necessarily a guy getting beat and we better be on point this week because these guys (the Titans) will make you look bad.”

What's changed over the past few months?

Naturally, the struggles have fans clamoring for lineup changes, though none appear imminent this week or for next Thursday's game at Denver (2-1). Reich said coaches hadn't even discussed the possibility.

But as Nelson knows, the problems run deeper than personnel.

Miscommunication has been a key issue for Indy (1-1-1), something Reich and offensive coordinator Marcus Brady acknowledge have put Ryan under more duress than expected.

It happened again last weekend and could have cost the Colts a win — if Kansas City defensive tackle Chris Jones had not been penalized for unsportsmanlike conduct following a sack on third down.

Instead, Indy kept the ball and Ryan took advantage of the second chance by throwing the decisive touchdown pass with 24 seconds left.

“I would say that’s the main issue right now, is just communication, being on the same page,” Brady said.

“Everybody — quarterback, offensive linemen, running back — just being all on the same page and getting that cleaned up. Just getting that communication fixed is what we’re stressing."

Ryan believes he also needs to play a part.

The 2016 MVP and one of the steadiest NFL players over the previous 14 seasons has been harassed into uncharacteristic miscues. Ryan has thrown four interceptions and fumbled seven times, the fifth-highest single-season total of his career.

Kansas City converted both of his lost two fumbles into TDs last weekend and he knows the pressure can't become an excuse.

“There's lots of tips that come that help with pass protection, and we have to be dialed into the reminders and tips we have week in and week out," Ryan said.

"At times, we've done it good. It's just that at certain times, at critical times too, we've had lapses. For me, the focus has to be on improving our consistency because the good is good and the bad is not good.”

Nelson sees the same thing on tape. It's not all bad but until the Colts get back to playing their more typical style, the message remains simple.