Column: A suspension is the least of Garrett’s concerns 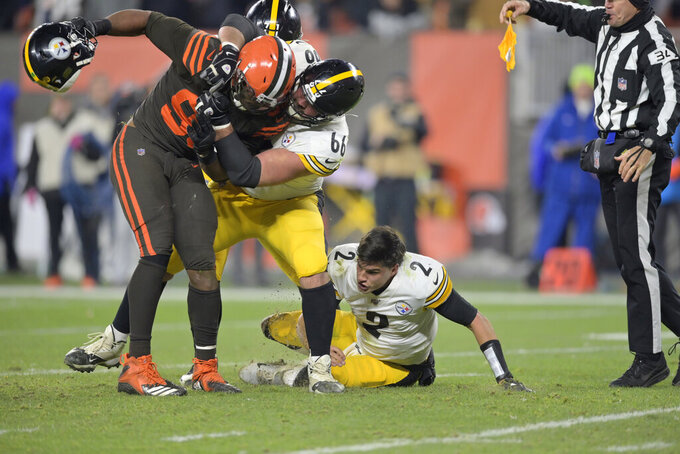 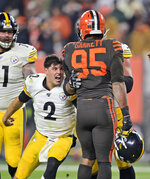 The lengthy suspension might be the least of his worries.

The Cleveland Browns’ star defensive end can expect to pay a huge price for his helmet-swinging assault — there’s no other way to describe it — on Steelers quarterback Mason Rudolph in the closing seconds of a Thursday night game that turned into an episode of WWE Smackdown.

The NFL quickly suspended Garrett for at least the final six games of the regular season as well as the postseason (the latter not really a concern since he plays for the Browns).

“Good players make mistakes,” said former Carolina receiver Steve Smith, now an analyst for the NFL Network. “However, what we saw from Myles Garrett, let’s be honest, it was stupid, and it was unacceptable, and it was a horrible act. You know what he has done? He has lost the privilege to play football for the remainder of the year.”

But the baggage that comes from a such a heinous, high-profile meltdown will not be shed when he returns to the gridiron, even eight months from now if he’s allowed to report for training camp.

Remember Kermit Washington? He never lived down the brutal punch that almost killed Rudy Tomjanovich in an NBA game.

How about Marty McSorley? He’ll forever be remembered for whacking Donald Brashear in the head with a hockey stick, leaving him with a severe concussion.

All the good that Garrett has done during his first three years in the NFL — a No. 1 overall draft pick who has 30.5 career sacks and writes heart-tugging poetry in his spare time — will now take a backseat to what happened when he lost his cool for a split-second.

While there were undoubtedly some extenuating circumstances, Garrett’s reaction as the scuffle escalated was indefensible. After ripping off Rudolph’s helmet, he swung it as hard as he could and caught the quarterback on top of the head.

Fortunately, unlike Tomjanovich and Brashear, Rudolph was not seriously injured.

That’s not likely to lessen the damage to Garrett’s reputation.

“It’s inexcusable,” said one of Garrett’s own teammates, quarterback Baker Mayfield. “I don’t care. Rivalry or not, we can’t do that.”

The NFL, which has its own image problems to deal with, was left with no choice other than making an example out of Garrett for this embarrassing episode.

Until now, the longest suspension for a single on-field incident was a five-game ban that went to former Tennessee Titans lineman Albert Haynesworth in 2006 after he yanked the helmet off Dallas center Andre Gurode and kicked him in the face, leaving a gash that required stitches.

Earlier this season, Raiders linebacker Vontaze Burfict was suspended indefinitely for his brutal play, but that was for an accumulation of incidents that culminated with a helmet-to-helmet hit.

Speaking to reporters after the game, Garrett at least had the good sense to acknowledge what will likely go down as the biggest mistake of his career.

“I lost my cool and I regret it,” he said. “It’s going to come back to hurt our team. The guys who jumped into the scrum, I appreciate my team having my back, but it should have never gotten to that point. That’s on me.”

It was all so unnecessary.

The Browns (4-6) were wrapping up one of their most satisfying wins of a disappointing season, having throttled their most bitter rival 21-7. There were just 8 seconds remaining when Rudolph, after delivering a meaningless pass, took umbrage with the way he was taken to the turf by Garrett.

When Rudolph grabbed at Garrett’s helmet, the Cleveland player responded by ripping off Rudolph’s headgear. Then, with a Steelers lineman pushing him away while an incensed, helmetless Rudolph charged at him, Garrett swung the black Pittsburgh helmet and nailed Rudolph.

“Beyond words,” Fox analyst Troy Aikman said as he watched the replay of Rudolph’s helmet bouncing off his own head.

“Absolutely, that’s embarrassing,” Garrett acknowledged. “What I did was foolish and I shouldn’t have allowed myself to slip like that. That’s out of character, but a situation like that where it’s an emotional game ... I allowed myself to fall into those emotions with that last play and what happened.’’

“Mason Rudolph should be significantly fined as well for trying to rip (Garrett’s) helmet off his head which ignited the retaliation,” Sanders wrote on Twitter. “He's not without fault in the unfortunate matter. This is a physical, emotional game played by men. Let's not forget that.”

“I thought it was pretty cowardly, pretty bush league,” said the guy who took over as the Steelers quarterback when Ben Roethlisberger went down with a season-ending injury.

Fortunately, Rudolph appeared to take somewhat of a glancing blow. He declared himself “fine” after the game and showed no ill effects from the attack.

Not in the least.

“What if he had hit Mason Rudolph right at the right spot and now that young man is paralyzed on the field?” Smith said. “You can’t do that.”

Garrett will have to carry around that shame for at least the rest of his career.

A suspension is the least of his concerns.

Paul Newberry is a sports columnist for The Associated Press. Write to him at pnewberry(at)ap.org or at www.twitter.com/pnewberry1963 His work can be found at https://apnews.com