Coming off a bye week, Giants face the Texans 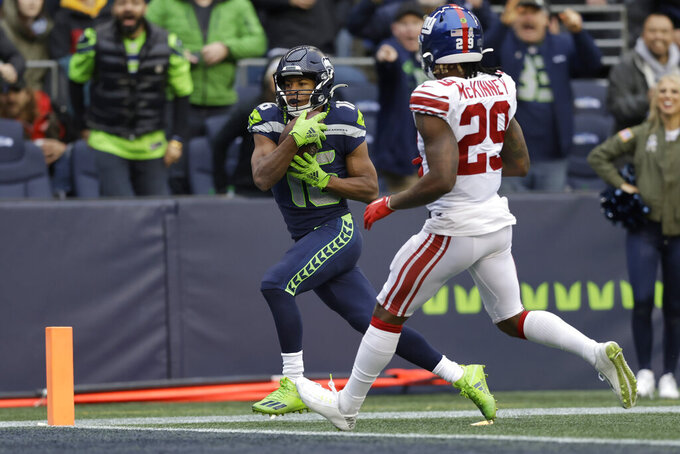 TURNOVER DIFFERENTIAL: Texans plus-2; Giants plus-2.

TEXANS PLAYER TO WATCH: Running back Dameon Pierce. The fourth-round pick is making a major run at offensive rookie of the year honors. He is sixth in the league with 678 yards rushing. The Florida product had a career-best 139 yards rushing against the undefeated Philadelphia Eagles in his most recent game.

GIANTS PLAYER TO WATCH: Safety Dane Belton. With defensive captain Xavier McKinney out for at least a month following a bye-week hand injury while vacationing in Mexico, the rookie is set to step in. Expect Davis Mills and the Texans to test him early.

KEY MATCHUP: The Giants' offensive tackles against Texans defensive end Jerry Hughes. New York's Daniel Jones has been sacked 25 times already. Hughes leads Houston with seven. He doesn't stay on one side of the line so left tackle Andrew Thomas, one of the NFL's top linemen, and right tackle Tyre Phillips will have to handle him. Phillips made his first start for the Giants against Seattle with rookie Evan Neal out with a knee injury.

KEY INJURIES: Texans DT Maliek Collins (chest) and WR Nico Collins (groin) returned to practice Wednesday, but it's too early to say if they will play Sunday. C Justin McCray returned to practice Wednesday and should play Sunday after missing last week’s game with a concussion. ... Giants OT Evan Neal (knee) and TE Daniel Bellinger (eye) haven't practiced since being hurt. CB Cor’Dale Flott (calf) and LB Oshane Ximines (quad) have been getting closer to returning for a week so there is a chance coming off the bye. Richie James returned from the concussion protocol Wednesday and may be ready to go.

SERIES NOTES: This will be only the sixth meeting between the teams. The Texans won the first one in 2002 and the Giants have won the past four, each four years apart. New York has won the two games in New Jersey.

STATS AND STUFF: The Texans are the NFL's only team with just one win. ... QB Davis Mills has thrown four interceptions combined in his past three games. ... RB Rex Burkhead has had at least four catches in two of his past three road games. ... WR Brandin Cooks, who was inactive in Houston’s most recent game after not being traded, has had four or more receptions in six of his seven games this season. He had seven receptions for 68 yards in his previous game against the Giants in 2016. ... WR Phillip Dorsett led Houston with a season-high 69 yards receiving last week. ... WR Chris Moore has a touchdown catch in two of his past three games. ... TE O.J. Howard has at least 60 yards receiving in three of his four games against the Giants. ... Rookie TE Teagan Quitoriano caught a TD pass on his first career reception last week in his NFL debut after missing the first seven games with an injury. ... Hughes had a season-high five tackles with two sacks last week. ... DB Steven Nelson had five tackles, a sack and forced a fumble last week. ... DB Jonathan Owens led the Texans with 10 tackles last week for his fifth game this season with at least 10 tackles. ... The Giants are 6-2 for the first time since 2008. ... New York's defense has recovered nine fumbles, the second most in the league. ... QB Daniel Jones has completed 128 passes without throwing an interception, the NFL's third-longest active streak. ... DL Dexter Lawrence leads the Giants with four sacks. ... TE Tanner Hudson had a career-high 58 yards receiving against Seattle before the bye. ... S Julian Love has had at least five tackles in three of the team’s four home games. ... DL Leonard Williams had season-high eight tackles and his first sack of the season against the Seahawks. ... CB Adoree Jackson had his fourth career forced fumble and second career recovery on the same play in the previous game.

FANTASY TIP: Giants RB Saquon Barkley. Barkley is third in the NFL in both yards rushing (779) and yards from scrimmage (968). The Texans have the league's worst defense against the run and they are 30th overall. Barkley also can catch the ball out of the backfield and he leads New York with 28 catches for 189 yards. ___