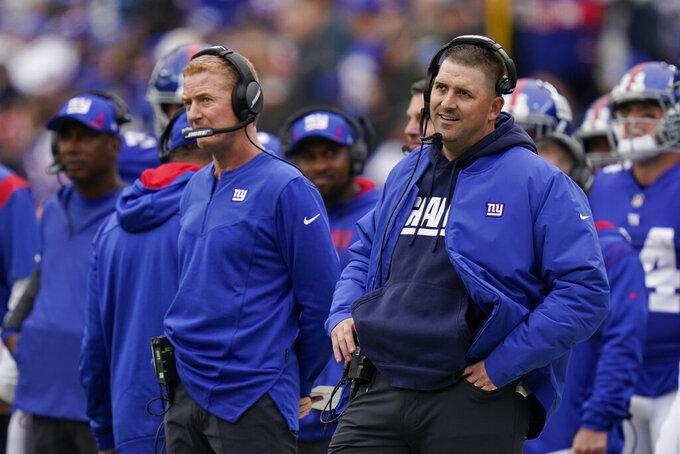 EAST RUTHERFORD, N.J. (AP) — After waiting seven weeks for his defense to play an outstanding game, New York Giants coordinator Pat Graham told his unit the same thing he does at the start of every week.

Sam Darnold and the Carolina Panthers won't be the opponent when the Giants (2-5) take the field on Monday night in Missouri. The guys on the other side of the ball will be the struggling Kansas City Chiefs (3-4.)

While Andy Reid's team has lost twice as many regular-season games as it did last season, the cast is as scary as ever on offense with quarterback Patrick Mahomes, tight end Travis Kelce and wide receiver Tyreek Hill.

“I can’t even begin to go down the list of all the different weapons they have,” Graham said Thursday. “It’s numerous, plus they have the best player in the league at the quarterback spot. It’s hard, it’s going to be hard, and the best offensive minds between coach Reid and coach (Eric) Bieniemy (the (offensive coordinator). It’s going to be a challenge. This is the most explosive offense, I think.”

The Giants' defense has struggled against good offenses. Denver and Washington had 400-plus yards in wins. Matthew Stafford of the Rams threw for four touchdowns. Dak Prescott threw for three TDs and the Cowboys had 515 total yards.

Defensive back and leading tackler Logan Ryan said repeating the performance is an bvious goal, quickly noting the opponent is very different. He smiled when asked if the Giants might be catching Kansas City at a good time.

“I don’t buy into that theory,” he said. “It’s Monday night, they’re going to bring their A game. They’ve got really good players. They’ve got championship-caliber players. I think they’re going to be at their best. Like I said, they’re still the No. 2 passing offense. They still have legit all Pro Bowlers all over their offensive side of the ball, so defensively, we’ve got our work cut out for us.”

What would help the defense is if the front seven can step up for a second straight week. New York had a season-high six sacks against the Panthers, with rookie linebacker Azeez Ojulari getting 2 1/2 and defensive lineman Leonard Williams 1 1/2.

Missing this week will be veteran starting safety Jabrill Peppers, who ruptured an ACL on a punt return in the third quarter against Carolina. The Giants uses five defensive backs a lot, so expect Julian Love to join Ryan, safety Xavier McKinney and cornerbacks James Bradberry and Adoree Jackson.

McKinney said Mahomes' ability to avoid the rush is a weapon.

“It’s a lot of challenges that we’ll face with this team,” McKinney said. "We just got to be prepared and be ready for it, but like you said, he can extend plays for a long time. He does a good job of just being able to look different things off and be able to make plays for his team.”