Commanders inconsistent but in playoff race at midway point 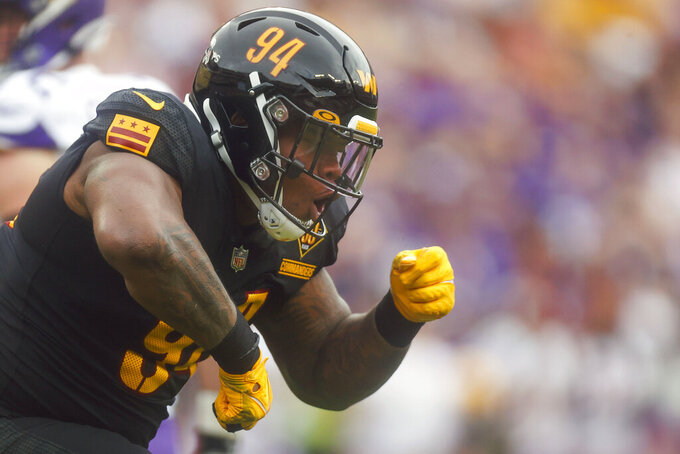 It's possible the Washington Commanders were one interception by Taylor Heinicke away from beating the Minnesota Vikings. They've also been one play away from other wins becoming losses.

At the midway point of the NFL season, they're 4-5 and still in the hunt for a playoff spot despite inconsistent play all over the field. The Commanders are a distant fourth in a surprisingly strong East Division, but they're in NFC wild-card contention with winnable games ahead.

“I like where the guys are: We’re playing physical, we’re running the ball physically,” coach Ron Rivera said Monday. “I think Taylor’s brought a little bit of a spark. It’s feast or famine at times with him. But he’s done the things that you need to do to give yourselves an opportunity.”

The opportunity is there — after going to Philadelphia for a tough Monday night game at the unbeaten Eagles — for Washington to make a run like it did two years ago under Rivera. The Commanders visit Houston and host Atlanta before games against the New York Giants on either side of their bye week and still have San Francisco and Cleveland later in the season.

Of course, things would feel a lot different if Washington didn't blow a 10-point fourth-quarter lead and lose to Minnesota. That snapped a three-game winning streak that was spurred by some Heinicke magic and stout defense.

“It’s football," Heinicke said. “On top of the world one week and then you feel like everything’s crashing down on you the next.”

Heinicke is 2-1 with five touchdowns and three interceptions since taking over for injured starter Carson Wentz, who said earlier in the season that the sky wasn't falling on the Commanders. It's still not, but how Heinicke plays the next few weeks will go a long way toward determining if that forecast changes.

“I have a lot of respect for Taylor: the way he played today, the way he plays week in and week out,” said Vikings quarterback Kirk Cousins, who spent his first six pro seasons with Washington. “I think he’s got a lot of grit and ability."

The defensive line led by tackles Daron Payne and Jonathan Allen and edge rusher Montez Sweat is the best thing the Commanders have going. They have 23 sacks and way more quarterback pressures and hits, and the front four is the biggest reason the defense has turned its play around after a rough start.

“We definitely have been playing our better ball of the year,” Payne said. "We are just trying to improve on every game and then come out and play better.”

With a small margin for error, the Commanders keep making preventable mistakes. That includes Heinicke's overthrow that was picked off Sunday and a couple of penalties that proved costly.

Rivera did not agree with the pass interference call on Benjamin St-Juste or the unnecessary roughness call on defensive lineman John Ridgeway, the latter of which allowed the Vikings to run down the clock and prevent a comeback. But Washington has been flagged 52 times for 503 yards, and that's not sustainable to remain in contention.

After the William Jackson experiment didn't work out and prompted a trade to Pittsburgh, the Commanders initially turned to waiver-wire pickup Rachad Wildgoose as the third cornerback behind Kendall Fuller and St-Juste. Danny Johnson got that spot against Minnesota, came away with his first career interception and may have earned more time at the spot.

“Danny’s a guy that continues to battle and earns opportunities, and he’s been practicing really well,” Rivera said. “Danny did some good things. There’s a couple things that Danny’s got to be a little bit better at. One thing is he lost his leverage on one particular play, but for the most part I thought he played pretty well.”

Running backs Antonio Gibson and Brian Robinson Jr. combined for 80 yards rushing, but the entire Commanders running game has stalled a bit. To win with Heinicke at quarterback, the offense needs to control the ball and the clock, and even this offensive line with its struggles should be able to pave the way.

Chase Young could return against the Eagles, a year to the day after he tore the ACL in his right knee. Rivera would only say it “just depends on how he’s progressing and his conditioning,” but Young's season debut could provide a significant boost.

Linebacker Cole Holcomb has missed the past two games with a foot injury, and rookie receiver Jahan Dotson has been out for more than a month with a hamstring injury.

1 — More game Wentz must spend on injured reserve before he can be activated. The biggest question facing Rivera and his staff moving forward is whether they'll stick with Heinicke or go back to Wentz, who was the unquestioned No. 1 quarterback before breaking the ring finger on his throwing hand.

Brace for Monday night in Philly. The Eagles are 10 1/2-point favorites, according to FanDuel Sportsbook, and it'll take a big effort from the Commanders to knock off a Super Bowl favorite.