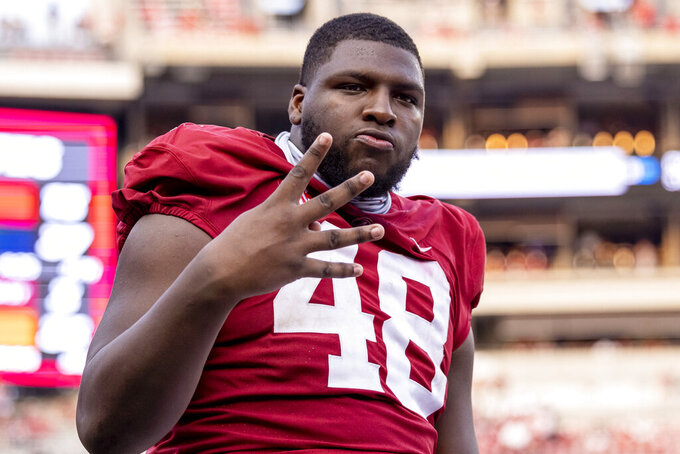 FILE - Alabama defensive lineman Phidarian Mathis (48) poses for a photograph during the second half of an NCAA college football game against Mercer, Saturday, Sept. 11, 2021, in Tuscaloosa, Ala. The Washington Commanders have another defensive tackle from Alabama after selecting Phidarian Mathis in the second round of the NFL draft Friday night, April 29, 2022. (AP Photo/Vasha Hunt, File)

ASHBURN, Va. (AP) — The second night of the NFL draft had a heavy Alabama flavor for the Washington Commanders.

Washington selected defensive tackle Phidarian Mathis in the second round and running back Brian Robinson Jr. in the third on Friday. Mathis is the third Alabama defensive lineman the team has drafted over the past six years.

Coach Ron Rivera watched Alabama's games against Georgia and Auburn and came away with little doubt Mathis, Robinson and others can contribute right away as professionals after playing in the SEC.

"You’ll never question the talent they play against," he said. “When you see production against teams like that, you feel very good about the evaluation you’re doing.”

Mathis joins Crimson Tide products Jonathan Allen and Daron Payne on the roster. Mathis and Payne overlapped in Tuscaloosa and are in touch regularly.

“That’s a blessing. They’re my big bros,” Mathis said. “I can’t wait to get around those guys, just learn from them and also just help them out.”

But the Commanders taking Mathis with the 47th pick opens up the possibility of trading Payne before he becomes a free agent following the 2022 season. A report surfaced earlier this week they would not extend Payne like they did with Allen last summer and have made other teams aware the 2018 first-round pick is available in a potential trade.

Rivera said the team's opinion on Payne has not changed but also mentioned the salary cap and decisions that might be necessary down the road.

"That’s kind of a situation we’re in right now," Rivera said. “This is about bringing a guy in, giving him an opportunity to contribute and be part of what we’re trying to do.”

Mathis gives the Commanders interior defensive line depth after losing Tim Settle in free agency and cutting Matt Ioannidis in a cap-saving move. He had 53 tackles and nine sacks in his senior season at Alabama.

Rivera said two main goals for the draft were giving new quarterback Carson Wentz more offensive weapons and some protection, while acknowledging there were also some needs on defense.

Selecting Robinson with the 98th pick, acquired from New Orleans when the Commanders moved down from 11th to 16th in the first round to take Penn State receiver Jahan Dotson, further checks the first box. Robinson, like Dotson and Mathis, played four years of college football and could be ready to contribute right away after rushing for 1,343 yards and four touchdowns during his senior season at Alabama.

General manager Martin Mayhew downplayed the Commanders taking three seniors with their first three picks, saying it was important to have a good play history to judge from. Beyond playing together at Alabama, Mathis and Robinson have something else in common in the eyes of the front office.

A physical runner, Robinson waited his turn behind Damien Harris, Najee Harris, Josh Jacobs and Bo Scarbrough and flashed back to biding his time while waiting for a call Friday night.

“Me having to stick it out and be patient, I knew it would all be worth it,” Robinson said. “You’re forced to be patient when you really don’t want to sometimes.”

Robinson can put away his patience now. He joins shifty back Antonio Gibson and third-down pass-catcher J.D. McKissic in Washington's backfield and won't have to wait to make an impact.

“He’s a different kind of runner than Antonio and J.D.,” Rivera said. “We have a trifecta of guys that you’re going to feel good about mixing up things.”

Dotson, a speedy, sure-handed receiver provides Wentz another dynamic option to go along with Terry McLaurin and Curtis Samuel in the passing game. Dotson will wear No. 1 after being the first pick since Washington became the Commanders.

“I just felt like No. 1 one was kind of the perfect thing,” Dotson said. “It's pretty cool to have that number on my back.”

Help on the offensive line and a safety are the team's outstanding needs. The Saints trade gave the Commanders an extra fourth-round pick, 120th overall, one of five selections Saturday before the draft wraps up.

"We have a chance to fill some more needs and take some pretty good players," Rivera said.