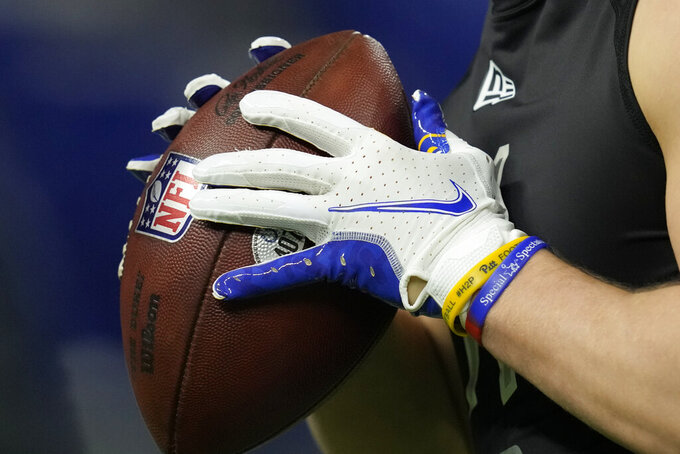 He's spent the last three months listening to people talk obsessively about ... the size of his right hand. Yes, really.

Welcome to the NFL draft process, a job interview in which you are poked and prodded and then poked again. A mentally grueling and sometimes emotionally draining experience where every fraction of a second and every tenth of an inch is fit for public consumption and debate.

That includes the length from the tip of Pickett's thumb to the tip of his pinkie on his right (hand). It measured 8 1/2 inches at the NFL combine, relatively small for a quarterback that will be tasked to grip an NFL football that's slightly larger than the one used in college.

During Pitt's Pro Day on Monday, his hand measured at 8 5/8, which he attributed to the stretching exercises he's been doing. Yes, it's strange to hear the rhetoric ahead of the draft focused on something that — for the most part — is up to genetics.

“You can't control that kind of thing,” Pickett said with a laugh.

So Pickett instead has spent the run-up to the draft trying to control the things he can. Like his diet. His preparation. His training and his focus. He spent 30 minutes unleashing a variety of passes — some of them traveling in excess of 55 yards in the air from his gloved right hand — in front of coaches, scouts and executives from every NFL team except the Los Angeles Rams.

The group included Pittsburgh Steelers head coach Mike Tomlin, outgoing general manager Kevin Colbert — who is retiring after the draft — as well as vice president Omar Khan and pro personnel coordinator Brandon Hunt, both of whom are up for Colbert's job.

To have one member of the team brass make the walk across the parking lot from the facility they share with Pitt is not unusual. To have so many — including offensive coordinator Matt Canada, defensive coordinator Teryl Austin and special teams coordinator Danny Smith — is unusual.

Whether the Steelers need a quarterback with the 20th overall pick after signing Mitch Trubisky to a two-year deal to compete with Mason Rudolph and Dwayne Haskins for the chance to replace the retired Ben Roethlisberger is up for debate.

Pickett's ascension from potential mid-round project a year ago to potential franchise quarterback this spring is not, regardless of how far he can stretch his pinkie from his thumb.

Tight end Lucas Krull, one of Pickett's good friends who is also looking to land on an NFL roster next spring, has some advice for those worried about whether Pickett can thrive at the next level.

“I think the issue is, if you want to try to find something to knock the guy on in the media, you can't find it on the game film. OK, so maybe you think he has small hands," Krull said. “The tape shows he can throw it 65 yards on a dime. I don't think (his hand size) is an issue.”

Regardless, it will all be over in the next six weeks. Pickett will almost certainly hear his name read by NFL commissioner Roger Goodell sometime during the first round on April 28. Whether Pickett will be there in person to exchange a bro-hug with Goodell in Las Vegas is still up in the air. He's still considering spending the draft back home in New Jersey.

Either way, the draft will serve as the end of one journey and the beginning of another. A journey longtime teammate Tre Tipton called several years ago.

“I told you all Kenny would be better than (former Pitt player and Pro Football Hall of Famer Dan) Marino and he did that,” Tipton said. “I told you all so and I still live and die by that.”

Tipton said the true transformation in Pickett came after an ankle injury in the middle of his 2020 season cost him a couple of starts. That setback was part of the reason he decided to return in 2021.

“Everybody goes to their trials and tribulations, but all he needed was a chance,” Tipton said. “And as soon as he learned to really believe in just Kenny, you see what happened.”