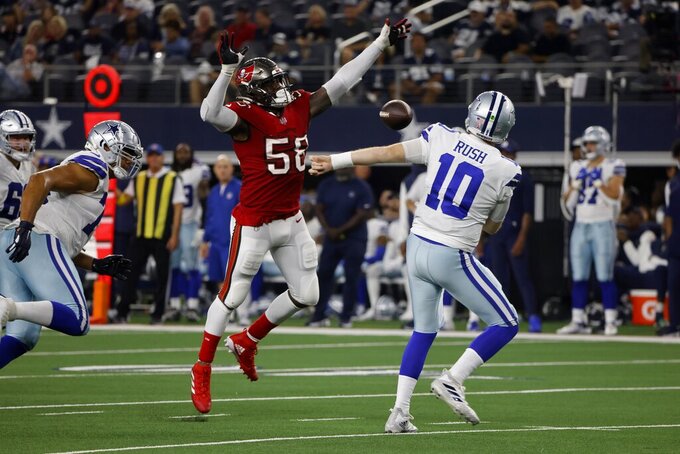 FRISCO, Texas (AP) — The Dallas Cowboys dumped Cooper Rush as their backup quarterback two years ago, only to bring him back a few months later after Dak Prescott's first major injury.

Now they're looking for him to win the same way he did a year ago in Minnesota, starting Sunday against defending AFC champion Cincinnati after Prescott fractured a bone near his right thumb in a season-opening loss to Tampa Bay.

“It’s crazy to think about,” Rush said Thursday after his only padded practice before the Cowboys (0-1) face Joe Burrow and the Bengals (0-1) at home. “That is what this league is. Never really know. You just want to be here. Be in it.”

Dallas gave longtime Cincinnati starter Andy Dalton a $3 million contract to back up Prescott in 2020, when the Cowboys had four different starters in the COVID-19 year after Prescott's season-ending ankle injury in Week 5.

The Dalton signing led to Rush's release after two seasons as Prescott's primary backup, and he spent some time on the practice squad of the New York Giants.

Rush was a free agent again when the Cowboys' situation at QB became truly chaotic with a concussion and positive COVID-19 test for Dalton. Rush re-signed, and when Dalton moved on to Chicago last year, he won the backup job — again.

The Cowboys were rolling at 5-1 when Prescott strained his right calf, and Rush kept the momentum going with a last-minute touchdown pass in a 20-16 victory over the Vikings. It's his only NFL start.

“I played a lot of games in college so you kind of remind yourself you’ve played football your whole life,” said Rush, who originally signed with Dallas as an undrafted free agent out of Central Michigan in 2017. “Coach (Mike) McCarthy told me that before the game last year, ‘You’ve been playing quarterback your whole life, just go play.’”

Rush knew it would probably be just one start last year. As expected, Prescott returned and led the Cowboys to the NFC East title before a wild-card loss at home to San Francisco.

While the Cowboys have kept Prescott off injured reserve so far, leading to hope he might be ready within four games, there's little question Rush will get multiple starts this time.

Star running back Ezekiel Elliott would have been fine with multiple starts last year.

“I know he’s on top of this offense," Elliott said. "I know he knows it inside out, maybe not as well as Dak, but very well. We’ve all got a lot of confidence in Coop and I think last year has a lot to do with that.”

Rush had another training camp competition for the backup job this year, beating out Will Grier in the first full camp with Dallas for the former Florida and West Virginia quarterback.

The 28-year-old Rush has lasted this long in Dallas because of a standout preseason as a rookie five years ago.

But his subsequent preseasons weren't as good, and there was plenty of talk about Grier leapfrogging him on the depth chart.

“He’s a quiet guy, keeps to himself a little bit,” five-time All-Pro right guard Zack Martin said. “But he does have that fire when he comes in the huddle. He commands it. When you show that you know exactly what’s going on, it just kind of calms everyone down. He’s been here a long time. He knows exactly what’s going on.”

The quiet personality contrasts that of Prescott, who commanded the locker room around reporters even as a fourth-string rookie when the Cowboys were Tony Romo's team in 2016.

Prescott's emergence as a leader was almost instantaneous when he started from the first snap of his first year after Romo's preseason back injury. Rush has always operated in the shadows, with a steady presence that fits his current job description well — just keep the Cowboys on track.

“If you look at Cooper’s personality along with Dak, it’s a very good blend,” McCarthy said.

“Cooper’s strength is his confidence in his detail. He’s very consistent, so there’s definitely a steadying-of-the-ship personality in him.”

Rush's stint could be fairly short, if owner/general manager Jerry Jones' optimism about Prescott's recovery is any indication. It could be as long as seven games, all the way to Dallas' open week.

If Rush doesn't play well, his stint as the starter might not last as long as Prescott's absence. But there's unlikely to be any change in his expression.

“I do feel in command and in charge,” said Rush, who was 24 of 40 for 325 yards with two touchdowns and an interception for a 92.2 rating against the Vikings.

“It goes back to knowing your stuff. They know that I know it. When you know your stuff, you can go back to lead and command and guys will respect (you).”