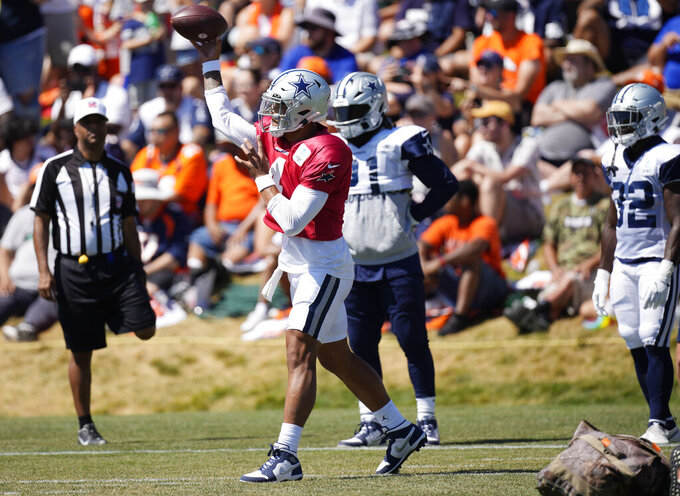 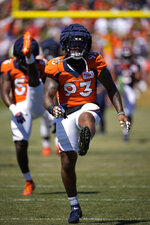 ENGLEWOOD, Colo. (AP) — Although both teams hailed it as a productive day, the Dallas Cowboys' joint practice with the Denver Broncos on Thursday at times resembled an undercard at the octagon instead of a prelude to Saturday night's preseason opener.

“Tempers flared a little bit but that's just the nature of football,” Broncos linebacker Bradley Chubb said. “Everybody's out there competing and trying to get each other better.”

The teams used both fields at UC Health Center, and the one with the Cowboys' offense and Broncos' defense featured more than a half-dozen skirmishes, including Denver defensive end Marquiss Spencer throwing a series of roundhouse punches at Dallas center Marc Farnick.

The arguments and altercations came on a scorching day that featured a capacity crowd of about 7,000 fans cheering and jeering the big plays by quarterbacks Dak Prescott and Russell Wilson.

“Yeah, we got better,” Prescott said. “Obviously when you come out here and you’re on the road playing in somebody else’s practice environment, things can get chippy as you saw. Tensions are high. Emotions are high, first time going to get somebody else. But when you put all that to the side, look at the X’s and O’s, the way we executed, the way we communicated, we definitely took a step.”

Wilson called it “a great day" for Denver's offense.

Neither Wilson nor Prescott is expected to play Saturday night.

New Broncos coach Nathaniel Hackett has raised eyebrows by dialing back practices in his first NFL training camp as a head coach. He ditched the traditional 7-on-7 drills in favor of more 11-on-11 snaps and hasn't held a single 1-on-1 pass-rushing drill for the offensive and defensive linemen. His first camp has also featured relatively little contact in a quest to reach the regular season as healthy as possible.

That approach paid off Thursday as the Broncos seemed like the fresher team.

“We talked going into practice that this is where our blood, sweat and tears come out,” Bonitto said. “It's where we work out in the offseason, where we've been working in training camp. We're not just going to let someone come in here and punk us. The home team really came out with a lot of aggression today. We wanted to set the tone for sure.”

Cowboys coach Mike McCarthy said he and Hackett spoke beforehand and warned their players that anyone getting into a fight would be removed from the field, but nobody was ousted from the joint practice.

Two Cowboys players got hurt. During punt coverage in the opening minutes of the workout, backup tight end Ian Bunting collided with Broncos outside linebacker Aaron Patrick. After a couple of minutes, Bunting got to his feet, shunned the cart and walked off on his own. Later, defensive tackle John Ridgeway walked off with an unspecified injury.

Prescott lauded the work he got in going against the Broncos starters.

“This was great. This is what coach (McCarthy) told me early in the spring when he decided on this camp schedule, coming out here and practicing against these guys," Prescott said.

Prescott, who completed three long passes to CeeDee Lamb, said the teams' emotions cooled down enough for them to get their full work in by the end of the day.

Wilson said he was also pleased with how Denver's offense performed in the joint practice, something he said he never got to experience in 10 years in Seattle because the Seahawks never practiced against another team in the summer.

“I loved it,” Wilson said. "A lot of great players on that side of the ball, too, the Cowboys. So, it was a blast to play out there.”

One player who was simply an observer was Broncos pass rusher Randy Gregory, who bolted Dallas in free agency and is recovering from shoulder surgery. He spent a lot of time catching up with his old teammates on the sideline.

“I think he just misses us," Prescott said with a smile. “We miss him, too.”