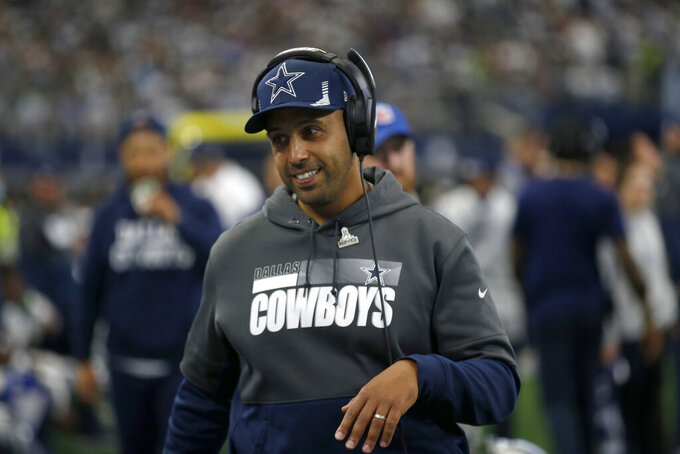 FILE - Dallas Cowboys defensive line coach Aden Durde walks on the sideline during the first half of an NFL football game against the Atlanta Falcons in Arlington, Texas, Nov. 14, 2021. Durde is the first British-born coach to get a full-time job in the NFL. He is a product of the league's coaching diversity programs. Durde is in his second stint with the Cowboys after starting out as a coaching intern. The London native's first full-time job came under Dan Quinn in Atlanta. Durde joined the Cowboys after Quinn was hired as defensive coordinator. The former NFL Europe linebacker also has done plenty of work in player development in his home country. (AP Photo/Roger Steinman)

FRISCO, Texas (AP) — Aden Durde was a coaching intern with the Dallas Cowboys about seven years ago when assistant Jerome Henderson used what he considered a common football term in a meeting with a defensive back.

Henderson doesn't remember the term, just that Durde stopped him later to suggest the player might not know what it was. Durde was right.

Leave it to a guy from London, who pursued a career in American football despite limited exposure as a youth, to get one of the game's lifers to think twice about teaching the basics.

“I think one of his gifts is he strips it down, the learning process, to the very beginning and doesn’t assume that you know anything,” said Henderson, now the defensive backs coach for the New York Giants. “And he teaches from there and builds from there. And he has this unique ability to understand where people are at and what they need.”

Durde's chance with the Cowboys in 2014-15 came through the Bill Walsh Diversity Coaching Fellowship — on Henderson's recommendation to then-Dallas coach Jason Garrett — and now he's the first full-time British-born coach in the NFL.

The full-time break came in Atlanta under Dan Quinn, and Durde ended up back in Dallas this year after Quinn was fired midseason of 2020 by the Falcons and came to the Cowboys as defensive coordinator.

Without the diversity program, Durde figures he might still be coaching for the London Warriors, a club program where he got his start as a young player in the 1990s. His British background is equally important to him.

“I think it’s for a lot of guys,” Durde said. “I know a lot of coaches that can do this on the other side of the Atlantic. And I’ve got the opportunity just through the situation I’ve been in. I take a lot of pride in it because I think I represent a lot of people.”

A lot more people on this side of the Atlantic know the Dallas defensive line coach now than they did in July, before the first episode of HBO's “Hard Knocks.” The producers obviously latched on to that English accent, even with an understated style while instructing pass rushers in meeting rooms and on the field.

Will Bryce, who has known Durde about 10 years and heads football development for the NFL in the United Kingdom, chuckled at all the attention his friend got through the five-part series chronicling the Cowboys in training camp.

Bryce remembers the media-shy Durde (“I prefer to fly under the radar,” Durde says with a smile) when they were asked to wear microphones while working together in the international development program.

“We’re very close and he’s the same guy whenever those cameras were there compared to any other time,” Bryce said. “Yeah, he might have just got more tolerant of them, or he forgot they were there.”

Henderson recommended Durde for the Walsh program because Durde was developing players in London and raising money for them to travel to the U.S. to try to get scholarships to play college football. So Henderson knew the Cowboys would be training a go-getter. It didn't take him long to decide they added a teacher, too.

Durde left the same impression on Rod Marinelli, the Dallas defensive line coach in 2014-15, and Quinn, who first hired him as a defensive assistant with the Falcons in 2018 and promoted him to linebackers coach last year.

“I thought that’s his superpower as a teacher,” Quinn said. “So he’s able to connect with different people on different sides of the ball. He’s digging in to new ideas and new ways of looking at things. He gave me a ton of feedback through the years.”

Durde played linebacker in NFL Europe in the early 2000s and spent time on the practice squads in Carolina and Kansas City later in the decade. He was out of football briefly before a six-year stint as defensive coordinator of the London Warriors, which included his time as an intern with the Cowboys.

He says he began thinking about coaching years earlier, when Durde was working with young players on the Warriors but wasn't actually their coach. The 42-year-old isn't wondering what might be next.

“I think looking ahead is something I don’t want right now,” Durde said. “Because I feel that you can get yourself in a jam and you can get yourself trying to chase things that aren’t really there and get even bitter about things. It’s not like I feel like above anything I could imagine. I imagined I could do this.”

“In terms of inspiring people to follow in his footsteps or trying to do things that other people didn’t believe could be achieved, I think is something that he’s really big on,” Bryce said. “I wouldn’t put it past him to do anything.”

Durde said he has been through the minority program three times, and that candidates sometimes need those second and third opportunities to get clarity for their careers.

“We’re all at different stages of where we’re at in our culture and our career,” he said. “The first time, I wasn’t in the place I needed to be. And I don’t think I really wanted to do that at that time because I was still working in the international program. As I went through it, I started to grow and kind of see what I wanted to do.”

“I just think all that stuff of where he’s from, all that, I think he’s going to be a good coach because he works at it,” Marinelli said. “He does a great job of relating to players, not being their buddies, but relating to them to build a relationship on football.”

Henderson believes Durde has an inherent advantage in building those relationships.

“He’s one of those people that he connects with everyone,” Henderson said. “And then he also has, at the same time, this unique ability to reach people where they are, and to understand people and for people to allow him to push them to places maybe they wouldn’t let others push them.”

Coaches included, as Henderson learned with something he thought was common knowledge in football-speak.