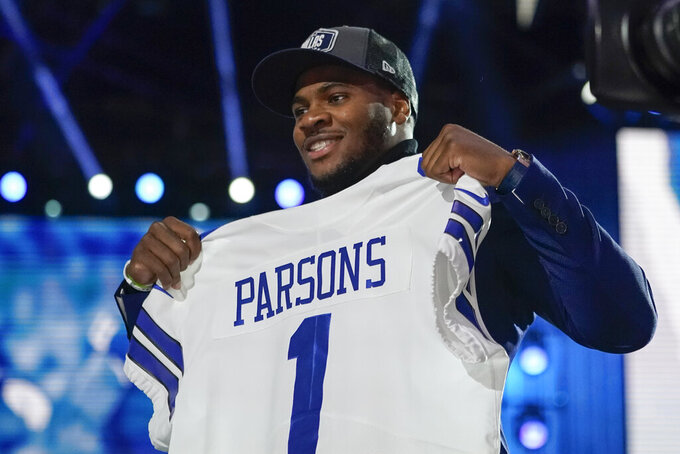 Penn State linebacker Micah Parsons holds a team jersey after the was chosen by the Dallas Cowboys with the 12th pick in the NFL football draft Thursday, April 29, 2021, in Cleveland. (AP Photo/Tony Dejak) 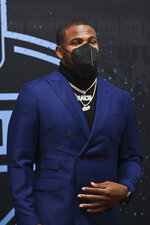 FRISCO, Texas (AP) — As they say goodbye to one Penn State linebacker, the Dallas Cowboys are welcoming another.

The Cowboys selected linebacker Micah Parsons of the Nittany Lions with the 12th overall pick of the NFL draft Thursday night after trading down two spots in a deal with NFC East rival Philadelphia.

Dallas drafted Parsons two days after Sean Lee bid farewell during the club's pre-draft news conference. Lee, a second-round pick in 2010, retired after spending all 11 of his mostly injury-plagued seasons with the Cowboys.

The Cowboys added a third-round pick from the Eagles in the trade, the 84th overall selection. The deal gives Dallas three picks in the third round.

Dallas made the move down after two cornerbacks the club was targeting at No. 10 were taken. South Carolina's Jaycee Horn went to Carolina at No. 8, and Patrick Surtain II of Alabama was taken ninth by Denver.

The Dallas defense gave up the most points in franchise history last year, finishing 6-10 in a disappointing debut for coach Mike McCarthy.

“Any bit of sensitivity about them being gone had been talked over carefully and with complete honesty within ourselves, we thought Parsons would immediately turn the light on our opportunity about what we could do with our defense,” owner and general manager Jerry Jones said.

“We obviously didn’t want to go back too far because we really liked Micah,” executive vice president of personnel Stephen Jones said. “Philly had called, and we knew what they were trying to do. We felt like we could get through the Giants and still get our player and get a third-round pick.”

The Cowboys currently have four picks on the second day of the draft Friday. Their second-rounder is at No. 44, with the third-round choices at 75, 84 and 99.

The decision to go with Parsons adds some intrigue at linebacker for Dallas.

Leighton Vander Esch, Dallas' first-round choice (19th overall) in 2018, has battled injuries throughout his three seasons, including a neck issue in which Vander Esch acknowledged a condition that involves the narrowing of the spinal column.

The future of Jaylon Smith is in doubt as well. Dallas took him in the second round knowing he wouldn't play for a full year because of a major knee injury in his final game at Notre Dame.

While Smith has been productive at times, the inconsistencies in his play led to questions of whether he will see the end of the $64 million, five-year extension he signed in 2019.

Parsons opted out of the 2020 season over COVID-19 concerns. He was an Associated Press All-American as a sophomore in 2019 when he led the Nittany Lions with 104 tackles, including 14 tackles for loss.

The 6-foot-3, 246-pound Parsons played his final college game at the home of the Cowboys, a 53-39 victory over Memphis in the Cotton Bowl to finish the 2019 season. Parsons led Penn State with 14 tackles and forced two fumbles

While Lee only had one season that wasn't interrupted by injuries, he had a productive career in Dallas. Lee led all NFL linebackers in interceptions through his first six seasons. He was an All-Pro in 2016 and a two-time Pro Bowler.

“I know what he represents, what type of player he was,” Parsons said. “Hopefully one day we can link up in Dallas and I can use him as a mentor and get better.”

Jerry Jones hinted two days before the draft the Cowboys might move off the 10th pick, indicating it was more likely to be down than up because they just signed Dak Prescott to a $160 million, four-year contract with five projected first-rounders at quarterback available.

Defense was the biggest draft need last year as well, but receiver CeeDee Lamb unexpectedly fell to the Cowboys at No. 17. They ended up getting a starting cornerback in the second round in Trevon Diggs.

Dallas hasn't exactly ignored defense while struggling on that side of the ball in recent years. Parson made it five times in the past seven drafts the Cowboys have taken a defensive player with their first pick. The first-round picks in that stretch haven’t been long-term solutions so far.

Cornerback Byron Jones (2015) signed with Miami in free agency last year. Defensive end Taco Charlton (2017) was released before his rookie deal expired, and the Cowboys have until Monday to exercise the fifth-year option for 2022 on Vander Esch's rookie contract. If they don't, his future beyond this season will be in doubt.

NEXT UP: Defense figures to remain the focus on the second day of the draft. Using the assets picked up in the trade with the Eagles, the Cowboys might need a bold move in the second round to get a cornerback. An offensive lineman might not be out of the question.