Cowboys give Turpin shot at NFL amid backdrop of TCU assault 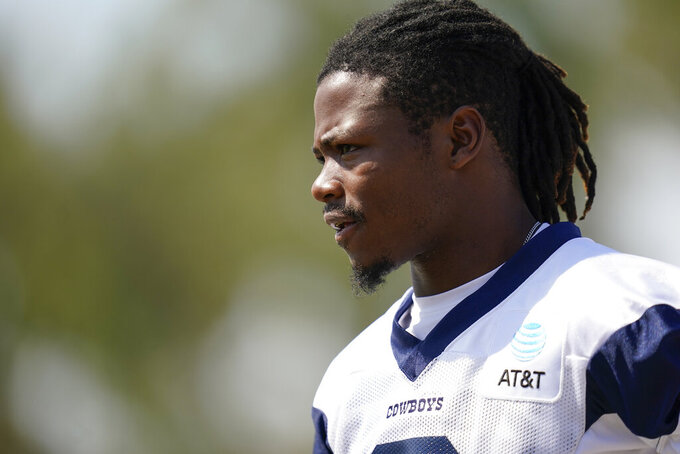 OXNARD, Calif. (AP) — KaVontae Turpin is getting his first chance in the NFL with the Dallas Cowboys nearly four years after the receiver and kick returner was accused of assaulting his girlfriend, ending his career at TCU.

Turpin was kicked off the team at TCU in part because the school was unaware of a previous assault case in New Mexico. He pleaded guilty in the Texas case with a chance to clear the conviction from his record and attended an abuse intervention program.

“I learned I got to learn from my accountability, my consequences,” Turpin said in his first meeting with reporters early in training camp. “I’m just looking forward to becoming a greater man now.”

The assault case led to a long wait for an NFL call, but that's not the only reason the speedy Turpin is a longshot. He’s also tiny, listed at 5-foot-7 and 158 pounds. If he makes the roster, Turpin will be close to his former college home with more time to tell his story.

Despite his size, Turpin probably would have been drafted in 2019. He returned a punt for a touchdown in each of his four seasons with the Horned Frogs while averaging 28 yards on 71 career kickoff returns with two more scores.

Turpin was MVP in the USFL, and said the Cowboys were the first team to contact him after the season ended. He didn't need that MVP trophy to get the attention of Dallas special teams coach John Fassel.

“He’s been on my radar since 2018,” Fassel said. “Clearly at TCU I’ve watched every single one of his returns and then keeping an eye on him over the course of his fan league and Spring League and then USFL. I’ve seen all of that work.”

There's little question Turpin can make it as a returner. The bigger challenge is receiver, even with the Cowboys having plenty of opportunities for newcomers.

Amari Cooper was traded in a cost-cutting move, and veteran addition James Washington broke a foot early in training camp. There are openings below CeeDee Lamb and Michael Gallup, the No. 2 receiver who won't be ready for the start of the season while recovering from knee surgery.

Turpin, who turned 26 last week, is getting a decent amount of work at receiver in camp. The Cowboys are getting him the ball on the perimeter and on jet sweeps. He led the USFL with 540 receiving yards and 316 yards after the catch.

Coach Mike McCarthy had a good first impression because the Pittsburgh native noticed Turpin wearing a Pittsburgh Pirates cap for his introduction at a team meeting. McCarthy has liked the on-field work, too.

“The thing I’ve been most impressed with is just the way he’s jumped in there,” McCarthy said. “He’s done a really nice job in the wide receiver room. Just the reps that he’s been given in the return game, he looks like a good fit for how we want to play there. I’m excited about what’s in front of him.”

Turpin is prepared for the questions about how he disappeared from the Dallas-Fort Worth sports scene so quickly, and isn't trying to avoid them. “I’m here to speak publicly, whatever they need me to do,” Turpin said.

His coaches are equally aware of the history, with McCarthy saying after the signing became official that Turpin was “responsible and accountable” and “well aware of what's expected of him.”

“I think that's a huge challenge for him, in a good way,” Fassel said. “As far as I know about him, great kid, great in meetings, super respectful around everybody here. I expect him to perform well and act like a grown man.”

If that happens, Fassel believes he has just the sort of special teams tool he needs.

NOTES: With the competition between Liram Hajrullahu and undrafted rookie Jonathan Garibay not going well, the Cowboys brought back one of their former kickers in Brett Maher. Garibay was waived. Maher was 20 of 30 on field goals when the Cowboys cut him after 13 games in 2019. He was 16 of 18 in eight games with New Orleans last season. ... The team said defensive passing game coordinator Joe Whitt Jr. is dealing with a “private health matter” and won't make the trip to Denver for a joint practice and preseason game. He is still participating in meetings. Whitt called the defensive plays in the preseason last year when defensive coordinator Dan Quinn was sidelined by a positive COVID-19 test.