Dalton embraces chance with Bears, knowing Fields behind him 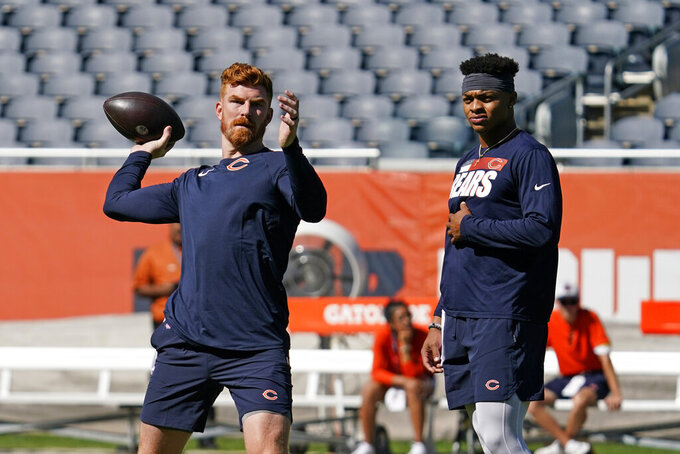 FILE - Chicago Bears quarterback Andy Dalton, left, looks to pass as quarterback Justin Fields watches as they warmup before an NFL preseason football game against the Miami Dolphins in Chicago, in this Saturday, Aug. 14, 2021, file photo. Justin Fields looked like he was ready to play during the preseason. But with veteran Andy Dalton penciled in as the No. 1 quarterback, it remains to be seen when the Chicago Bears' prized rookie will play again. Another question is how short a leash Dalton will be on with the former Ohio State star behind him. (AP Photo/Nam Y. Huh, File)

LAKE FOREST, Ill. (AP) — Andy Dalton is embracing his opportunity with the Chicago Bears. He's not too concerned prized rookie Justin Fields is right behind him.

“I’m focused on me and what I can do, helping this offense and helping this team,” he said Monday. “So, I’m looking forward to Week 1.”

The Bears are sticking with their plan to open the season with Dalton as their starting quarterback. They expect the three-time Pro Bowler to be the one staring down Aaron Donald when Chicago visits the Los Angeles Rams on Sept. 12, with Fields in a backup role.

Not exactly a stunner.

The Bears have said since they signed Dalton to a one-year deal that he is their No. 1 quarterback. It didn't change after they traded up nine spots with the New York Giants to draft Fields with the No. 11 overall pick.

That move sent a surge of excitement through Chicago, energizing frustrated fans. Fields looked ready in the preseason, showing poise, squeezing passes into tight windows and extending plays with his mobility, even if he was doing it against backups.

“Going into OTAs we evaluated where they were," coach Matt Nagy said. "Where’s Andy learning this offense? How quick can he? He aced that right away. Justin, where are you at with learning how to call the plays? That’s the start. He did a good job there. He got better when he came back in training camp. So he grew, he got better. Andy came into training camp, and the very first day in all our practices, he’s gotten better.”

The Bears are hoping for better results after going 8-8 in the regular season for the second straight year. They made the playoffs for the second time since Nagy took over in 2018, only to lose a wild-card game at New Orleans in convincing fashion.

They're banking on Fields to develop in a way Mitchell Trubisky never did after being drafted No. 2 overall in 2017. They're also counting on Dalton to perform better than Nick Foles last season and Mike Glennon in 2017. Glennon was signed that year to be a veteran bridge, only to be benched after four starts.

“Andy has to control Andy," Nagy said. "Andy can’t control something that is out of his control, which is Justin. You know what I mean?”

Dalton has thrown for 33,764 yards, 218 touchdowns and 126 interceptions over nine seasons with Cincinnati and one with Dallas. He led the Bengals to the playoffs his first five seasons after they drafted him out of TCU in the second round in 2011, but never won a postseason game.

Dalton was released after Cincinnati drafted Joe Burrow with the No. 1 pick in 2020. Now, he has another prized quarterback behind him, and the question is how long a leash the Bears will give the veteran, particularly if they struggle early on.

Fields is also more accomplished coming out of college than Trubisky was. He was a Heisman Trophy finalist in 2019 and the Big Ten Offensive Player of the Year each of his two seasons at Ohio State after transferring from Georgia.

If Dalton is injured in the next two weeks and can't play in the opener, Nagy said Fields would start. But for now, he's leading the scout team.

Nagy said there are risks that come with starting a rookie as he adapts to the schemes and the speed of the game. There is also a fear that could create bad habits.

“Sometimes, if that happens, you could say, ‘Well it’s good that they learn from that,’” Nagy said. “And there’s some quarterbacks that have had that happen and there’s others where it just becomes bad and it can ruin them. So I think what you’re trying to find is OK, where’s that happy medium with them whether it’s Justin or somebody else.”

He said Fields is “trying to get better and better every day,” but still has room to grow.

Dalton signed with Dallas last year as a backup and wound up making nine starts after Dak Prescott suffered a season-ending ankle injury.

“Knowing that I’m coming in to be the starter, I could be more myself going into this one rather than last one, where I kinda had to find my place,” Dalton said. "And it happened a little bit later in the process last year, too. There’s a lot of things that I can take from it that helped me transition.”

NOTES: Nagy said RB Tarik Cohen, recovering from a torn ACL, developed scar tissue and the Bears have no timetable on his return.