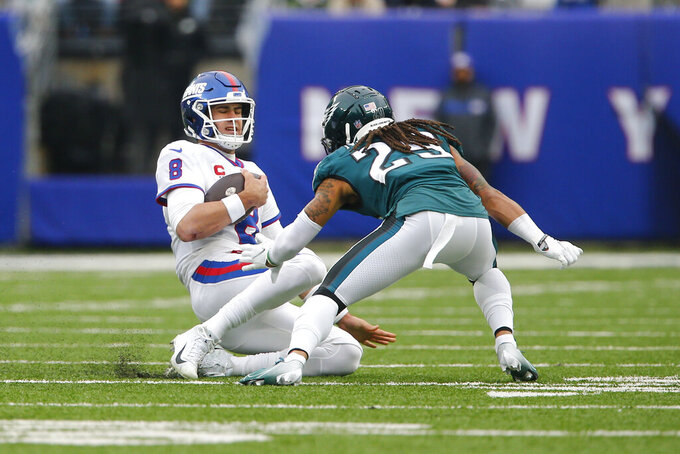 EAST RUTHERFORD, N.J. (AP) — New York Giants quarterback Daniel Jones practiced on a limited basis despite a strained neck and he hopes to play this weekend against the Dolphins in Miami.

“I think it’s just sore,” Jones said Wednesday after a short workout. “Like I said, I’m feeling much better today and expect I’ll continue to feel better and better every day.”

Concern about Jones' playing status blew up Tuesday night when it was reported he sustained a neck injury in a win over the Eagles on Sunday and there was a chance he might miss a game.

It was somewhat surprising because Jones did not appear to be hurt in the 13-7 win. He didn't miss any snaps and he also took part in the post-game news conference.

Jones said he woke up early Monday because his neck hurt. Coach Joe Judge added he was not told at any time during the game that Jones was hurt. He found out Monday when he got a copy of the injury report. Players had Tuesday off.

Jones has been the Giants' starting quarterback since the third game of his rookie season in 2019 when he replaced two-time Super Bowl MVP Eli Manning. Jones has started every game this season. The only action he has missed was when he sustained a concussion just before halftime against Dallas on Oct. 10. He recovered and started against the Rams the following weekend.

Jones did not say on what play he was hurt, although it might have been a run on the second play from scrimmage.

“My focus is to get back this week and do everything I can to prepare to play Sunday,” said Jones, adding he planned to follow the advice of the team's medical staff. “That’s where my focus is right now.”

Judge rarely says much about injuries. He said it will depend on what happens over the next few days whether Jones plays.

“We expect him to practice tomorrow and Friday, as well,” Judge said Wednesday. “We’ll see what he can do. It’s like any kind of injury coming out of the game, we’ll just see how he does.”

If Jones were unable to play, veteran Mike Glennon would start. He replaced a concussed Jones late in the first half against Dallas and completed 16 of 25 passes for 196 yards and a touchdown.

“We always prepare all of our players. Every week, Mike’s job is to be prepared that if his number is called at any point in time, either before or during the game, he’s ready to go in and run our offense,” Judge said. “We’ll also prepare Daniel to start, as well.”

The Giants added a security blanket, announcing Wednesday they had signed quarterback Jake Fromm off the Buffalo Bills' practice squad. He was taken in the fifth round of the 2020 draft and was inactive all season.

Fromm completed 21 of 36 passes for 172 yards this preseason. He was released on Aug. 31 and signed to the Bills’ practice squad the following day.

Former Michigan State quarterback Brian Lewerke has spent the season on the Giants' practice squad. Neither he nor Fromm has played in an NFL regular-season game.