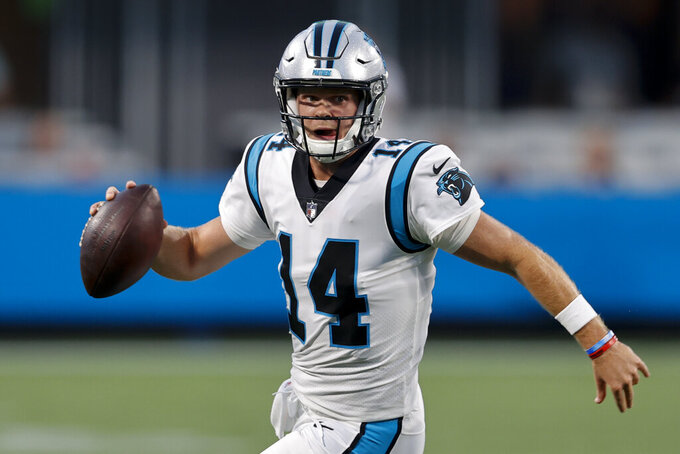 Carolina Panthers quarterback Sam Darnold looks to pass during the first half of a preseason NFL football game against the Pittsburgh Steelers Friday, Aug. 27, 2021, in Charlotte, N.C. (AP Photo/Nell Redmond)

CHARLOTTE, N.C. (AP) — Sam Darnold felt the Carolina Panthers needed a night like this before the regular season.

Darnold completed 19 of 25 passes for 162 yards and two touchdowns, and the Carolina Panthers defeated the Pittsburgh Steelers 34-9 on Friday night in the preseason finale for both teams.

Darnold, who has seen most of his action in joint practices rather than games this preseason, spent much of the first quarter under duress despite playing against a defense resting all of its starters.

But the 2018 No. 3 overall draft pick acquired this offseason from the New York Jets stayed calm and rebounded, finding rookie Terrace Marshall Jr. for a 13-yard touchdown pass and Robby Anderson for an 8-yard score before exiting at halftime. D.J. Moore caught six passes from Darnold for 48 yards.

“There was some good and some bad, but it was good to get out there and get that game feel,” Darnold said.

Christian McCaffrey sat out, but the rest of Carolina's offensive and defensive starters played the entire first half.

With this being the Steelers’ fourth preseason game — most teams played three — coach Mike Tomlin rested all but four starters, including quarterback Ben Roethlisberger, wide receivers JuJu Smith-Schuster and Diontae Johnson, and running back Najee Harris. Even backup QB Mason Rudolph got the night off.

Dwayne Haskins started and struggled, completing just 9 of 16 passes for 108 yards with one interception and one late touchdown on Pittsburgh's final drive. He was replaced by Joshua Dobbs, but then returned to the game after Dobbs injured his toe.

"It wasn’t the performance he wanted or we wanted," Tomlin said of Haskins.

Haskins, viewed coming into training camp as in a battle with Rudolph for the Steelers' No. 2 QB spot, called it a “tough one," adding “I feel like I’ve done a great job of showing I’m coachable, wanting to learn, wanting to get better.”

The Panthers built a 10-0 lead midway through the second quarter after Marshall, one of the most productive receivers in the NFL this preseason, caught a pass from Darnold in the flat and eluded two defenders en route to the end zone. The score was set up when Pittsburgh’s Matthew Sexton muffed a punt and Carolina’s Keith Kirkwood recovered at the Steelers 15.

Darnold's second TD was a perfectly lofted pass over the head of linebacker Robert Spillane and into Anderson's arms in the middle of the end zone.

Panthers coach Matt Rhule said he feels like Darnold is developing into the leader and gaining respect from his teammates through his work ethic and the amount of time he's putting in.

“I see a more mature player and he seems more comfortable out there,” Anderson said of Darnold, his former teammate with the Jets.

Undrafted rookie running back Spencer Brown from Alabama-Birmingham, helped his chances of making an NFL roster by running for 57 yards on 11 carries, including a 20-yard touchdown. Backup quarterback Will Grier added a 24-yard TD run for the Panthers.

The Panthers traded for kicker Ryan Santoso on Thursday, providing competition for the struggling Joey Slye.

Now he may have won the kicking job.

Santoso made the most of his opportunity, banging a 52-yard field goal attempt off the right upright and through the goal posts in the first quarter. He later added a 27-yarder and three extra points. Slye missed wide right from 49 yards in the second quarter, his third miss of the preseason.

After Slye's miss, former Panthers wide receiver Steve Smith Sr., who now works as a commentator for the team's TV broadcast team, remarked “Where's my fork? 'Cause he is done.”

Said Santoso: "The last 24 hours have been whirlwind, but it's been a blessing."

TEPPER: I CAN AFFORD IT

Panthers owner David Tepper used a curse word on the Panthers' halftime show. When Smith replied, “You just did. They’re going to fine you,” the billionaire owner replied "I can afford it.”

Steelers: Linebacker Marcus Allen (leg) left in the first half and did not return.