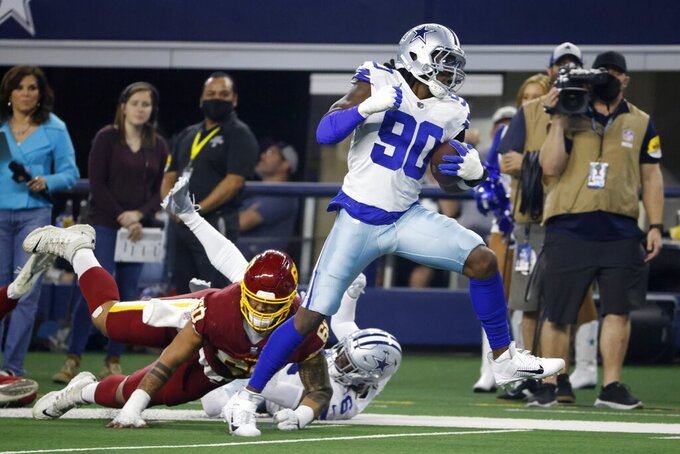 FILE - Dallas Cowboys defensive end DeMarcus Lawrence (90) breaks tackles on the way to the end zone for a touchdown after intercepting a pass throw by Washington Football Team's Taylor Heinicke (4) in the first half of an NFL football game in Arlington, Texas, Sunday, Dec. 26, 2021. The Cowboys are bringing back Lawrence on a new contract that will create more room under the salary cap, a person with knowledge of the agreement said Monday, March 14, 2022. (AP Photo/Ron Jenkins, File)

DALLAS (AP) — The Dallas Cowboys traded up in the second round to draft DeMarcus Lawrence eight years ago after releasing DeMarcus Ware when they couldn't find a path to salary cap relief with their star pass rusher.

The situation was the same with Lawrence this offseason. The outcome was different. He called it a “no-brainer.”

“Being a Cowboy for life is always a dream,” Lawrence said Thursday in his first comments to reporters since signing a new $40 million, three-year contract with $30 million guaranteed. “There's no reason why I go against my dreams.

“Being able to finish where I started and have another opportunity to go to a Super Bowl, I don't want to do it nowhere else. I made that decision a long time ago.”

The Cowboys faced a $27 million cap hit on the $105 million, five-year contract Lawrence signed three years ago, putting him at risk of getting cut so the club could save money under the cap. The new deal cuts the cap charge about in half.

Ware, the career sacks leader for Dallas, signed with Denver after leaving the Cowboys in 2014, and won a Super Bowl a year later. The Broncos are part of the story again, in a way Lawrence wouldn't have wanted to envision.

He figured his reworked contract would give Dallas the cap space needed to keep pass rushing partner Randy Gregory. Lawrence saw reports of the Cowboys and Gregory agreeing on a contract, then after a workout saw Gregory had chosen Denver instead.

Both deals were in the range of $70 million over five years. Gregory’s agent, Denver-based Peter Schaffer, balked at some contract language in the Dallas deal. The Broncos are guaranteeing Gregory $28 million.

“It was a shock to me,” Lawrence said. “But Randy's a brother for life. He got paid like he deserved to get paid. Best to Randy, but we still have dreams and aspirations that we have to reach for.”

The Cowboys traded No. 1 receiver Amari Cooper to Cleveland and released right tackle La'el Collins for cap relief. While they've kept a dozen of their own free agents, the only outside picks were bargains in defensive end Dante Fowler Jr. and receiver James Washington.

The personnel losses don't faze Lawrence after the Cowboys won the NFC East at 12-5 before losing a home wild-card game to San Francisco. It was the 26th consecutive season Dallas hasn't reached the NFC championship game since the last of the storied franchise's five Super Bowl titles.

“Have you all been seeing what's going in the NFL lately?" Lawrence asked. “I've been seeing 32 teams ... losing players. I don't even know the rosters of half of these teams no more. Being able to see all the different changes and stuff, it's going to be an exciting year.”

Lawrence hasn't recorded more than 6 1/2 sacks in a season since back-to-back years with at least 10 led to his big contract. He missed nine games in 2021 after breaking his foot in practice the week after the opener.

The two-time Pro Bowler said it's “been a while” since he had a healthy offseason. And the departure of Gregory puts more focus on how well he can lead Dallas' pass rush the way he was five years ago.

“I'm not trying to be the player that I was a couple of years ago. I'm trying to top that," said Lawrence, who had a career-high 14 1/2 sacks in 2017. “I'm trying to make the guys around me better, so understanding, the year that I did have 14 1/2 sacks or whatever, as a team we didn't amount to (expletive). So what does that really matter?”