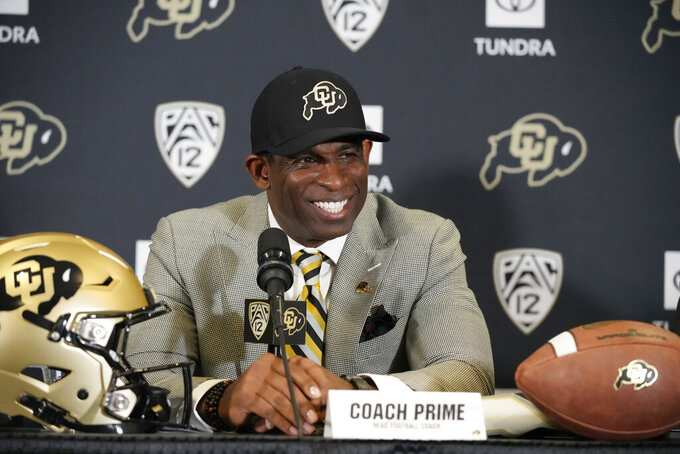 Deion Sanders speaks after being introduced as the new head football coach at the University of Colorado during a news conference Sunday, Dec. 4, 2022, in Boulder, Colo. Sanders left Jackson State University after three seasons at the helm of the school's football team. (AP Photo/David Zalubowski)

DENVER (AP) — Deion Sanders sauntered into the Arrow Touchdown Club for what felt more like an old-fashioned tent revival than a news conference to introduce the University of Colorado's splashy new hire of “Coach Prime” as its head football coach.

At that very moment Sunday afternoon, the Denver Broncos were predictably blowing another late lead in their death spiral under Nathaniel Hackett and Russell Wilson, who this time couldn't even reach the red zone much less the end zone in a 10-9 loss at Baltimore.

Folsom Field has been college football's wasteland for the better part of this century, but a perfect storm has brewed over Boulder that could allow the Buffaloes to turn things around overnight from a 1-11 team that was one of the worst in the nation to a relevant program again.

The university recently launched a collective for donations that will create a pool of money so that Colorado can compete with its conference rivals in name, image and likeness deals. And the school has relaxed its rules regarding transfer credits, a move that will allow Sanders' program to compete with established football powerhouses across the country.

Combine that with the hiring of Sanders and Colorado suddenly can compete with traditional powerhouses in luring five-star recruits and prominent players in the transfer portal.

Suddenly it's cool to be at Colorado, and with Coach Prime's arrival, the Buffs have swiped the buzz that the Broncos have owned in the Centennial State for decades.

It was the state's professional football team and not its flagship university that had all the buzz this spring.

When the Buffs were embarking on a season that would see them win just one game and fire coach Karl Dorrell midseason, the Broncos were boasting about their acquisition of Wilson, whom they would reward with a contract extension before the season that was worth just shy of a quarter-billion dollars.

Broncos fans were thrilled that the team's new owners were members of the wealthiest family in America. Walmart heir Rob Walton, the oldest child of Walmart co-founder Sam Walton, bought the Broncos for $4.65 billion, a global record for a professional sports franchise.

Things were looking up in Denver before it all took a bad turn on opening weekend when Hackett settled for a Brandon McManus 64-yard field-goal attempt in Wilson's horrible homecoming at Seattle.

McManus missed, just as he did Sunday when he came up short on a 63-yarder at Baltimore.

Wilson has thrown for just eight touchdowns in 11 starts, and the Broncos have reached the end zone three times since Halloween.

Detroit Lions running back Jamaal Williams has as many touchdowns himself — 14 — as the entire Broncos roster this season.

The Broncos managed just three field goals Sunday but still throttled the Ravens all afternoon before allowing Lamar Jackson’s backup, Tyler Huntley, to drive them 91 yards in 16 plays for the game’s only touchdown with 28 seconds left.

Meanwhile, the Dallas Cowboys scored 33 points in the fourth quarter Sunday against the Indianapolis Colts, or 18 more points than the Broncos have managed in the third quarter all season.

It's “Groundhog Day” in Denver with the Broncos' maladroit offense unable to score and its stellar defense incapable of closing out opponents.

Not helping matters was a rare slip-up by the Broncos' social media team over the weekend after the week's poster on the team's Twitter account showed Denver's leading tackler Alex Singleton alongside Jackson, Baltimore's dynamic starting quarterback who went out in the first quarter with a knee injury.

Critics wondered why they highlighted Singleton rather than say, cornerback Patrick Surtain II or safety Justin Simmons, who would record two interceptions Sunday.

“Looks like we made some new friends with our game poster!" read the team's response on Twitter. “Shoutout to the real fans who know we do this every week & always feature a different player.”

Parsing the “real" fans during a seven-year slide that includes six straight losing seasons isn't the best bet for a team that's experiencing such a disappointing 2022 season as Denver is.

Especially on the weekend that Sanders arrived to such fanfare at Folsom Field — and during a Broncos game, no less.

For once, the first question at Hackett's Monday news conference wasn't about the team's myriad problems. Instead, he was asked about Sanders' arrival 30 miles away in Boulder.

“I congratulate him — what a great opportunity," Hackett said. "What he did at Jackson State was unbelievable. It shows how good of a coach he is. I’m very excited for him and the state of Colorado to have him here.

"I met him one time when I was a kid. I remember that, but he probably wouldn’t remember that. It’s Prime Time. He’s one of the best to ever play this game, and it’s great to have him here.”