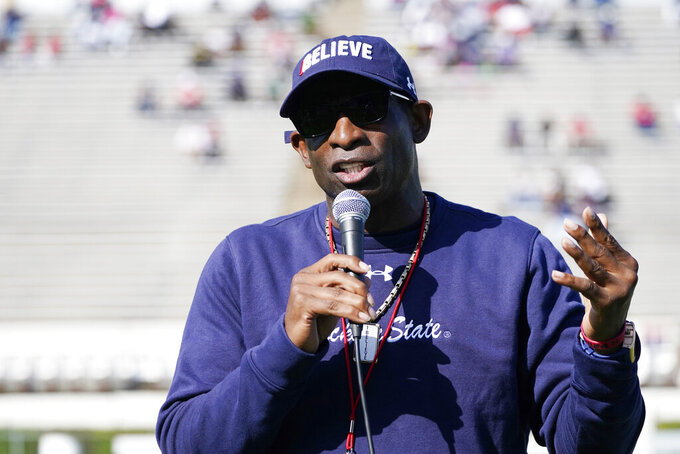 Deion Sanders did his part to make sure NFL teams don’t overlook players from historically Black colleges in this week’s draft.

The Jackson State coach and Pro Football Hall of Famer released his “Prime Prospects” on Monday, featuring 16 players from 12 HBCUs. Last year, not one HBCU player was drafted.

“My prediction is five to seven, maybe 10 guys that should be drafted,” Sanders told The Associated Press. “We have at least 15, 16 truly draftable guys, more that I feel like probably are going to get drafted. Exposure helps. What’s going on and what’s translating today in HBCU football is helping tremendously. We’re getting a lot of shine.”

Neon Deion has helped provide a spotlight on HBCU players since leaving his analyst duties at NFL Network and taking over at Jackson State in 2020. Sanders was the Southwestern Athletic Conference Coach of the Year in 2021 after leading the Tigers to an 11-2 record.

“I’m not thinking about legacy. I don’t care about that. I care about winning games and changing lives and provoking change in whatever I touch,” Sanders said. “Eddie George has done a wonderful job at Tennessee State. Hue Jackson coming into Grambling, raising the bar there is going to be tremendous. Willie Simmons at (Florida A&M) and some of the other notable persons, Coach (Fred) McNair at Alcorn, are some guys that can really coach the game and they’re able to take this thing to another level. I’m thankful and pleased that I have Aflac partnering with me to bring shine, so to speak, and shed light on what we’re doing, especially with this Prime Prospects. It’s unbelievable.”

Aflac’s new advertisement, named “Believe,” features Sanders and will air during the draft. The campaign reflects Aflac’s “Close the Gap” initiative, which centers on educating, supporting and advocating for those underserved and overlooked.

“We’re doing a better job of the exposure,” Sanders said. “We’re often overlooked and under exposed, which is something that we’re trying to tackle right now. ... We’re trying our best to bring light to all those. It’s just absurd to me. I know pro football. I worked at the NFL Network for almost two decades and played for 14 years. I know what a professional looks like, and there are a multitude of these young men that can play the game at the next level, if given the opportunity. When you don’t see a player visually, it’s hard to understand that he’s equipped and he could participate. If you didn’t see the players from Alabama on television every darn week, I’m pretty sure the number that they’re circulating into the NFL would cease a bit. You never see these kids and you don’t understand what they’re capable of, and I’m telling you they can play this game.”

In 2021, Aflac donated $75,000 to the Jackson State University athletic department for professional development, as well as $25,000 as a supporting partner of Sanders’ football camp. Aflac will donate an additional $100,000 in 2022 to help Sanders continue his mission of mentoring young athletes.

“I’m happy in the role that God has chosen for me,” Sanders said. “I’m happy to be where I am, and I tell people all the time I know I’m employed at Jackson State, but I’m working for the whole HBCU.”

The inaugural Legacy Bowl held in February in New Orleans gave top football players from HBCU schools a new level of exposure to pro scouts and executives. But Sanders has anther idea for a Bowl game.