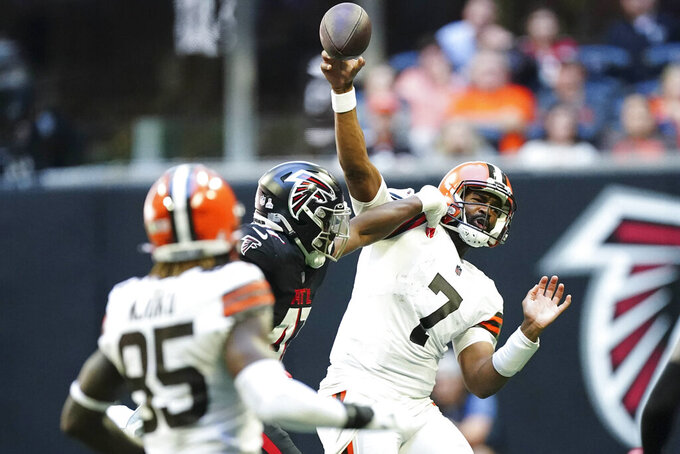 ATLANTA (AP) — A three-point loss led many observers to second-guess Cleveland coach Kevin Stefanski's ill-fated decision not to kick a field goal on the Browns' opening drive against Atlanta.

It's possible the Browns' depleted defense played a role in Stefanski's call to go for it.

The Browns were missing three starters on their defensive line, including All-Pro end Myles Garrett, in Sunday's 23-20 loss to the Falcons. Garrett was ruled out on Saturday as he continues to recover from injuries suffered when he flipped his Porsche while speeding on Monday.

“Man, we knew it was going to be tough on the defensive side of the ball,” running back Kareem Hunt said. “It was tough for everybody. We’ve got to find a way to win.”

Given the short-handed defense, perhaps it's understandable that Stefanski left his offense on the field instead of going for a field goal on on fourth-and-3 from the Atlanta 4 on Cleveland's opening drive. Jacoby Brissett's incomplete pass left the Browns with no points.

Stefanski wouldn't say if he felt extra urgency to take advantage of the early touchdown opportunity.

“We wanted to score sevens in the red zone. We really felt like we could,” Stefanski said. “We tried to run it on the third down but got knocked back, which was unfortunate, and we didn’t come away with points and that falls on me.”

It was no surprise he faced numerous questions about the decision after the game.

“I felt comfortable with the play call, trying to get seven points down there as opposed to three,” Stefanski said. “I understand the question, but I felt good about the play.”

Stefanski said Clowney “was close” to being cleared to play against Atlanta.

“I wanted to give him some time with the ankle, but it wasn’t quite ready today,” he said, adding it was too early to speculate on the status of the injured players for next week's home game against the Los Angeles Chargers.

Brissett wouldn't blame the loss on one missed scoring opportunity.

“It’s a bunch of plays that we can go through and point at and say ‘This was that,’” Brissett said. “We still had a chance at the end. ... We’ve got to learn from it just like we’ve done from every game and then find ways to get better, do things that we did good in this game and go from there.”

Brissett said the players “respect Kevin for giving us that trust” on the fourth-down decision. Hunt also backed his coach.

“I’m cool with the decision to go for it,” Hunt said. “We’ve definitely got to put points on the board and make it work.”

Despite the missing players, Cleveland held Atlanta to 131 passing yards. Cornerback Denzel Ward had an interception. Atlanta outgained Cleveland 202 yards to 177 on the ground.

Brissett completed 21 of 35 passes for 234 yards with no touchdowns and one interception. Brissett is the fill-in starter while Deshaun Watson serves his 11-game suspension for alleged sexual misconduct.