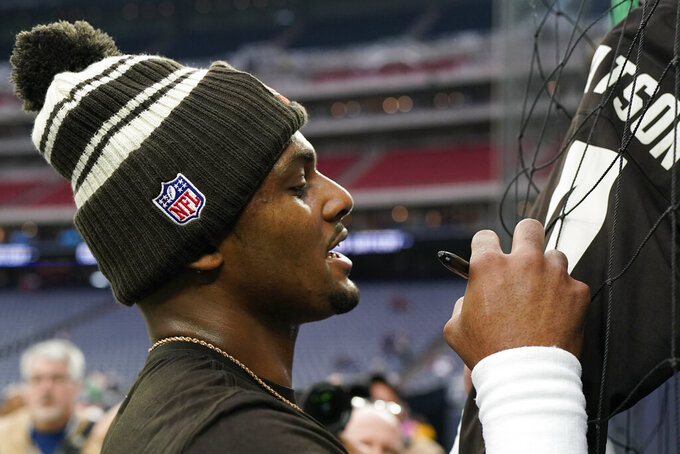 Again, he declined to express remorse for behavior that earned him an 11-game suspension.

Back in his old home to play his first game in 700 days, Watson showed plenty of rust debuting with Cleveland, but the Browns didn’t need him to do much in a 27-14 victory over the Houston Texans on Sunday.

After signing jerseys for Texans and Browns fans and taking pictures with a few more before the game, Watson was overwhelmed with boos once it started. He heard jeers before each snap in the first half and for much of the afternoon.

Watson has been accused by more than two dozen women of sexual harassment and assault during massage sessions. He has settled 23 civil lawsuits brought by the women, while two others, including one filed in October, are pending.

Asked if he felt remorseful for his actions in his return to Houston, Watson said his legal team told him not to address questions about his suspension.

“Of course, it was a tough situation,” he said. “The suspension was tough but, at the same time, my main focus was just to try to be 1-0 as a football player today.”

Pressed further, Watson said: “I was just excited to be back on the field today. I did everything I was asked, was required to do. I did all that.”

Watson had several supporters in the stands before the game, while a group of the women who accused him of sexual misconduct also planned to attend. Attorney Tony Buzbee, who represents the women, didn’t respond to a text message seeking to confirm their attendance. He said earlier in the week about 10 women wanted to attend “to kind of make the statement, ’Hey we’re still here. We matter.’”

One fan walked into NRG Stadium wearing a derogatory shirt in Browns colors that includes text saying “I need a massage.” He was joined by a fan wearing Watson’s No. 4 Browns jersey.

Fans in the parking lot set up a fake massage table with a mannequin wearing a red Texans jersey and a towel.

The few fans in their seats when Watson and the Browns jogged onto the field about an hour before kickoff booed.

“It is what it is,” Watson said of the boos. “I can’t control what the fans do. My job is to go out there and execute.”

He didn’t do that too well.

Watson finished 12-of-22 passing for 131 yards and one interception. The three-time Pro Bowl quarterback posted the worst passer rating of his NFL career at 53.4. The Browns (5-7) got two defensive touchdowns and a special teams score to beat the Texans (1-10-1).

After an interception gave the Browns their first possession at their 43, Watson threw two incomplete passes. He spun away from a sack on third down, and fans cheered when his throw to David Bell hit the ground.

Watson’s first completed pass on his third attempt resulted in a turnover when Anthony Schwartz fumbled after a 12-yard gain. Watson later drove the Browns to Houston’s 11 before throwing a pick in the end zone.

“We don’t expect him to be Superman after he hasn’t played in two years,” All-Pro defensive end Myles Garrett said.

Watson sat out the 2021 season after demanding a trade from Houston. After two grand juries in Texas declined to indict him over allegations of sexual harassment and assault, the Browns traded several draft picks to get Watson and then signed him to a fully guaranteed $235 million contract.

During warmups, Watson signed jerseys for fans behind the end zone. An 18-year-old man from East Texas got Watson’s autograph on his Browns jersey. A couple from Houston wearing Texans jerseys also got Watson’s signature on their jerseys.

“We don’t really know what happened and everyone deserves a second chance,” said Sherry Holden, explaining her support.

Several Browns fans said they were uncomfortable rooting for Watson.

“I’m cheering for the jersey and the team but it’s hard to accept him as my quarterback,” said Brandon Collins, who traveled from Ohio for the game.

The NFL wanted to suspend Watson for at least one season but settled for 11 games after an independent arbiter initially gave him a six-game ban. NFL Commissioner Roger Goodell pointed to former U.S. District Judge Sue Robinson calling Watson’s behavior “egregious” and “predatory” in seeking the full suspension.

Watson also was fined $5 million and required to undergo professional counseling and therapy. Watson has maintained his innocence but also apologized to the women he impacted and

The Browns went 4-7 with veteran Jacoby Brissett filling in for Watson.

Coach Kevin Stefanski committed to starting Watson next week and emphasized him getting his first game out of the way.

“He looked very sharp in practice and he’s excited for the next one so he understood this one was going to be different," Stefanski said.