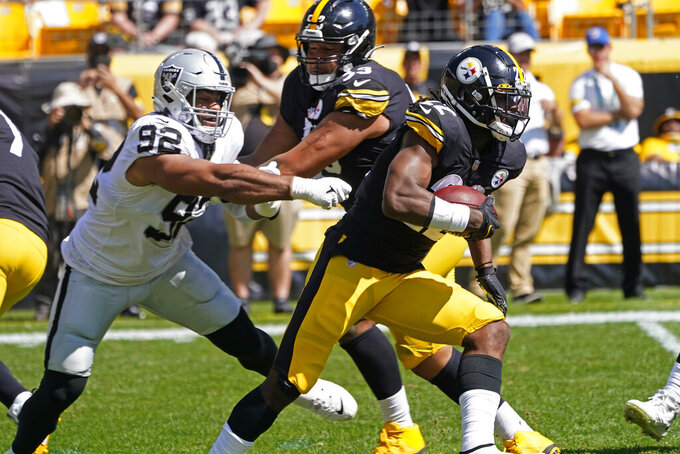 PITTSBURGH (AP) — Pittsburgh Steelers president Art Rooney set the mandate a couple of weeks after watching his team get blown out at home by Cleveland in the opening round of the 2020 playoffs.

"Everybody in the building agrees you can’t finish 32nd in the league in running and feel like you’re going to have a successful season,” Rooney said in late January.

Nearly every offensive decision the Steelers made during the offseason was aimed at fixing the problem. The offensive coordinator? Fired. The offensive line coach? Same. Their first four picks of the draft were used on a running back (Najee Harris), a tight end (Pat Freiermuth) and a pair of raw but talented linemen (Kendrick Green and Dan Moore Jr.).

And two weeks into 2021, little progress has been made. The Steelers are 31st in the league in yards rushing (57 yards per game) and 30th in yards per carry (3.3). Take out a 25-yard run by wide receiver Chase Claypool in the opener against Buffalo and those numbers drop to 45 yards per game and 2.6 yards per carry.

Quarterback Ben Roethlisberger stressed repeatedly in the aftermath of a 26-17 loss to Las Vegas on Sunday that dropped Pittsburgh to 1-1 that he needed to play better.

Maybe, but the 39-year-old finds himself in the same position he was 10 months ago: as his team's best and at the moment only option to move the ball.

The Raiders gave up 103 yards to largely unknown Baltimore running backs in an overtime win in Week 1 (not to mention the 86 piled up by Ravens quarterback Lamar Jackson). Harris ran just 10 times for 38 yards.

Only one of those runs — a 14-yard burst in the first quarter that helped the Steelers get out of a hole — came on a play that was perfectly blocked.

Otherwise, Harris largely found himself surrounded by white jerseys as he reached the line of scrimmage.

“We had some moments, but like anything else, we’ve just got to find ways to improve more, fix our flaws, fix our mistakes,” Harris said.

Roethlisberger stressed before Week 1 against Buffalo that there would be growing pains, as should be expected when you have three newcomers in Moore, Green and Trai Turner on the line next to a second-year player in guard Kevin Dotson and tackle Chuks Okorafor, who remains a bit of a project in his fourth season.

Yet the pains aren't just metaphorical. With the running game going nowhere, the Raiders teed off on Roethlisberger. He was sacked twice and hit 10 times.

For all the problems Pittsburgh had in the running game in 2020, the one thing the line managed to do was keep Roethlisberger upright, allowing just 14 sacks in 615 drop-backs. He's already taken four sacks in two games and only avoided a couple of more by throwing it away under heavy duress.

“There were times that we looked good and a lot of times we didn’t,” Roethlisberger said. “So, got to get it figured out.”

Splitting a pair of games against two teams with legitimate postseason aspirations is hardly cause for panic, particularly with an extra week added to the schedule.

Still, the Steelers have little wiggle room while playing in the AFC North. They failed to build off their road upset against the Bills and looked very much like the group that ended 2020 on a 1-5 slide.

Asked if he thinks the offense can get it together on the fly, Roethlisberger nodded.

“I hope so,” he said. “Got a divisional opponent coming in here next week (in Cincinnati).”

The Steelers have dominated the series with the Bengals, winning 14 of the past 16 meetings. Taking Cincinnati for granted, however, would be ill-advised. The Bengals stuffed Pittsburgh 27-17 last December even with backup quarterback Ryan Finley filling in for the injured Joe Burrow.

Even with veteran defensive lineman Tyson Alualu out after fracturing his ankle in the first quarter, Pittsburgh's defensive line kept the Raiders in check on the ground. Led by Cam Heyward, the Steelers held Las Vegas to 52 yards rushing. Pittsburgh placed Alualu on injured reserve Monday and promoted Henry Mondeaux from the practice squad.

The trainer's room. Star linebacker T.J. Watt, inside linebacker Devin Bush and cornerback Joe Haden are all dealing with groin injuries. Bush and Haden were inactive on Sunday and Watt stood on the sideline in the second half after tweaking his groin late in the second quarter. Las Vegas quarterback Derek Carr scorched the Steelers over the final 30 minutes, throwing for 263 yards and two scores.

Inside linebacker Robert Spillane's role was greatly diminished when the Steelers traded for Joe Schobert last month. With Bush out, however, Spillane filled in admirably. He had 10 tackles and played with the kind of effort that helped him reach near-folk hero status last fall.

Tight end Eric Ebron was targeted just twice and failed to catch a pass for the first time since signing with the Steelers in the spring of 2020. Freiermuth, by contrast, caught all four passes that came his way against the Raiders.

16. The number of times Roethlisberger has been hit through two weeks. Pittsburgh's best chance to hang tough is with Roethlisberger in the huddle. If the line can't create any room for Harris, it needs to at least be more effective in protecting the future Hall of Famer.

Try to find some sort of rhythm in the running game against the Bengals (1-1). Cincinnati did give up 123 yards on the ground in a loss to Chicago on Sunday.