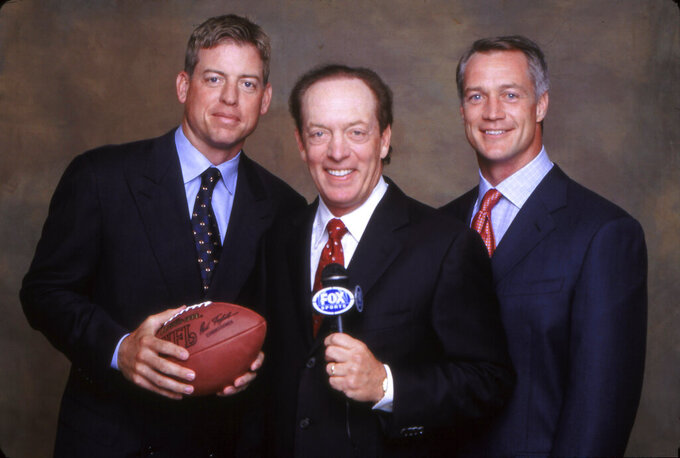 In this 2001 photo provided by Fox Sports, Troy Aikman, Dick Stockton and Daryl Johnston, from left, pose for a photo, location not known. Stockton has done his final game on network television after a 55-year career that included stints with Fox, CBS and NBC. He has cut back on work in recent years, doing only NFL games for Fox and said during a telephone interview Friday, March 26, 2020, that he had been contemplating retirement for the past year. (Jason Wilheim/Fox Sports via AP)

Carlton Fisk retired from baseball in 1993 but the announcer who called his famous World Series home run has only just announced his own.

Dick Stockton is stepping away after a 55-year career that included stints with Fox, CBS and NBC. He had cut back on work in recent years — doing only NFL games for Fox — and said Friday during a telephone interview that he had been contemplating retirement for the past year.

“It’s an instinctive feeling that you have that you’ve done what you’ve accomplished,” he said. “I didn’t think that I wanted to continue to do it and defy age and say, ‘Look, I want to keep going, I want to show that I could do it.’ That's not the point. I decided now was the time to do it."

The 78-year-old Stockton called at least 1,545 games on network television but the moment that stands out is Fisk's dramatic game-winning home run in the 12th inning of Game 6 of the 1975 World Series that gave the Boston Red Sox a 7-6 victory over the Cincinnati Reds.

As Fisk was rounding the bases, Stockton stayed silent for 41 seconds while the pictures and ballpark sounds took over, including Fenway Park organist John Kyle playing Handel’s “Hallelujah Chorus."

“When great moments in sports happen, no one says ‘that is going to be one of the greatest moments or calls ever.’ And only in time does this thing happen,” Stockton said.

Stockton had to make a quick call because the ball was a line drive and curving foul as it was going down the left-field line. Had it been a towering shot, Stockton could have had a couple seconds to make a decision, but he didn't have that luxury.

Stockton — who called Red Sox games from 1975-78 — was on the call because NBC had team announcers as part of the booth (that practice would end after the 1976 Fall Classic). Stockton called the first 4 1/2 innings before Joe Garagiola took over. When the game went to extra innings, the two alternated with Stockton calling the 10th and 12th.

“In television at least, nothing can match the pictures and the sounds from the field. And so that home run being replayed, that's what carried it,” Stockton said. “When you think about it, it's the same as Kirk Gibson's home run (for the Los Angeles Dodgers in the 1988 World Series). Those are the things that remain indelible in people's minds.”

Stockton called virtually ever sport during his career, including the 1992 and ‘94 Winter Olympics for CBS. He was the network’s lead NBA voice for nine seasons and had a front-row seat for the league's rise to prominence. When Stockton started doing NBA games on CBS, the playoff games, including the finals, were still shown on tape delay after the late local news.

It wasn't until Julius Erving, Larry Bird and Magic Johnson arrived that the league really started to boom in popularity, including all the finals games airing live beginning in 1983.

Stockton called three NBA finals matching the Boston Celtics and Los Angeles Lakers. He also had Michael Jordan's buzzer-beating shot in the first round of the 1989 playoffs when the Bulls beat the Cleveland Cavaliers.

“It was just a perfect storm. I thought it was a great era of basketball and then Michael Jordan and the Bulls come in,” he said.

Stockton was a part of Fox's NHL and MLB coverage as well. He also did NBA games for Turner for 19 seasons (1995-2013) and worked with Reggie Miller and Chris Webber. The Naismith Basketball Hall of Fame gave Stockton the Curt Gowdy Electronic Media Award in 2001.

As for his retirement plans, Stockton said he plans to continue playing golf and tennis as well as traveling in the fall for the first time in nearly 50 years.

"People have asked me since it came out if it is a bittersweet thing? Absolutely not, I knew what I wanted to do, and nothing would change that,” he said.