Dick Vermeil is as much Philly as the cheesesteak and Rocky 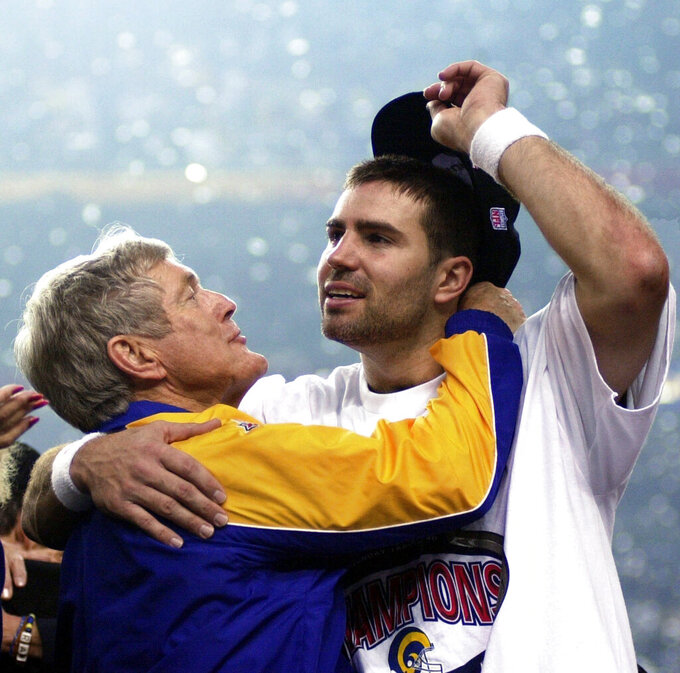 FILE - St. Louis Rams quarterback Kurt Warner, right, gets a hug from coach Dick Vermeil after the Rams defeated the Tennessee Titans 23-16 to win NFL football's Super Bowl 34 in Atlanta. Vermeil won a Super Bowl with the St. Louis Rams and later coached the Kansas City Chiefs. But Philly is home and he’s going into the Pro Football Hall of Fame as an Eagle. (AP Photo/Dave Martin, File)

PHILADELPHIA (AP) — Revered in Philadelphia, Dick Vermeil quit coaching and left town before returning to the NFL and completing his Hall of Fame resume in other cities.

Vermeil won a Super Bowl with the St. Louis Rams and later coached the Kansas City Chiefs. But Philly is home and he’s going into the Pro Football Hall of Fame as an Eagle.

“The more I was around people in Philadelphia, the more I was given the opportunity to connect with them,” Vermeil said. “There’s a lot of very compassionate people in Philadelphia. And, they are very free with their compliments. When they see you and tell you what a great job you do, and as long as you don’t let it distort your ego, it’s really a warm experience and pretty quick you say I belong here, this is my community. They respect me. They care about me. They appreciate the job that my staff and I did with their Eagles football team.”

After two more seasons, Vermeil retired from coaching because he was burned out. He spent the next 15 seasons in the broadcast booth. Eagles owner Jeffrey Lurie tried to convince Vermeil to return to coach Philadelphia in 1995 but they couldn’t reach a contract agreement. The Rams hired him in 1997 and Vermeil helped assemble “The Greatest Show on Turf” teams. Led by first-year starting quarterback Kurt Warner, the Rams beat the Tennessee Titans 23-16 in the Super Bowl following the 1999 season.

Vermeil retired again after that victory only to come back with the Chiefs in 2001. He coached five seasons in Kansas City, making one playoff appearance. Vermeil was 120-109 in 15 seasons with a 6-5 record in the postseason.

While they appreciate him in St. Louis and he has a Northern California-based winery, Vermeil is as much part of the fabric of Philadelphia as the cheesesteak and Rocky Balboa.

The 85-year-old is still plastered on billboards promoting an insurance company.

“I can’t tell you how many times that I have walked down the street in Philadelphia and had some little, old, gray-haired lady — my hair now — come up and stop me and want to talk to me and tell me how much they enjoyed the job I did and going to the games with their husband or their sons and that kind of stuff,” Vermeil said. “I’m not bragging when I say this, but I had a great feelings for Kansas City and St. Louis. I didn’t get to stay in St. Louis after we experienced success but when I go back there, when I get off an airplane and start walking down the off ramps of the airport, it’s amazing how those St. Louis people don’t forget what we did there, so it helps you feel pretty good about yourself as you become 85 years old.”

Known for being emotional in news conferences, Vermeil’s genuine nature is a big reason why he’s so popular in a city considered one of the toughest spots to play and coach.

“I think they liked my work ethic approach,” Vermeil said. “At that time, we’re pretty structured, pretty disciplined, pretty demanding. I think they identified with me in that I was honest and direct. And if I couldn’t answer the question, then I couldn’t answer it. ... I think people identified with the integrity. We tried to always display the humbleness that we approach to our success and the anguish we showed when we failed. And I think that’s the Philadelphia community. It’s not hard to communicate with people if you tell them the truth.”

In 2006, Greg Kinnear portrayed Vermeil in “Invincible,” the movie about Vince Papale’s improbable story of becoming a 30-year-old Eagles rookie after earning a roster spot during an open tryout.

A Napa Valley native beloved by the City of Brotherly Love earning a gold jacket seems like a perfect script for Hollywood, too.