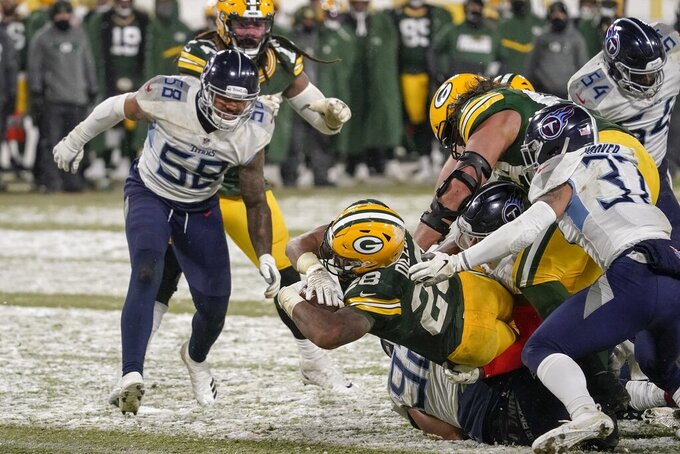 Green Bay Packers' A.J. Dillon runs for a touchdown during the second half of an NFL football game against the Tennessee Titans Sunday, Dec. 27, 2020, in Green Bay, Wis. The Packers won 40-14. (AP Photo/Morry Gash)

GREEN BAY, Wis. (AP) — This hasn’t been the type of rookie season that Green Bay running back A.J. Dillon anticipated, but the second-round pick from Boston College demonstrated Sunday why the Packers drafted him.

Dillon rushed for 124 yards — more than he had gained all season — and scored two touchdowns in a 40-14 rout of the Tennessee Titans. The breakthrough performance came after Dillon missed over a month because of COVID-19.

“Just so proud of the way he’s battled throughout all the adversity he’s gone through this year with getting the COVID and kind of not maybe getting as many carries as I know he would like,” Packers coach Matt LaFleur said Monday. “But staying in, and being tough and being resilient. That’s what we need from everybody. And he has definitely been a guy that has epitomized that.”

“I’ll be the poster boy for COVID is the real deal,” Dillon said after Sunday's game. “It affects everybody differently, for sure. One person may have no symptoms. Somebody may have very serious symptoms. Not to go too much into myself, but for me it was a hard process.”

Dillon got an opportunity Sunday because a quadriceps injury prevented running back Jamaal Williams from playing.

The Packers believe Dillon’s size — he’s listed at 6 feet, 247 pounds — and his experience playing in Boston make him well suited for cold-weather games.

Dillon demonstrated that with each of his touchdowns on a snowy night. On the first, he shed a tackle at the line of scrimmage on fourth-and-inches, made a move around a defender several yards downfield and delivered a 30-yard score.

He later bulled his way past defensive lineman Matt Dickerson and reached the end zone on a 7-yard inside run.

“There were so many times where he’s hit, whether it’s at the line of scrimmage or 2 yards downfield, and he’s getting 6, 7, 8, 9 yards after contact,” LaFleur said. “I thought that was so impressive. The last touchdown run he had, I mean, he literally ran over a defensive lineman — a nose. And that rarely happens in this league.”

Dillon should have a bigger role in Green Bay’s backfield next year since Jones and Williams are set to be free agents after this season. The Packers (12-3) already gave lucrative extensions to defensive tackle Kenny Clark and offensive tackle David Bakhtiari, so it’s hard to imagine they’ll be able to keep both Jones and Williams.

Now that Dillon has emerged, the Packers may need to give him more playing time during their playoff run.

“It is so exciting when you have three backs that you have so much confidence in,” LaFleur said Sunday. “All three of those guys, to me, are starters in this league.”

The Packers raced to a 19-0 lead. They’re outscoring teams 278-150 in the first half and are scoring a league-high 31.6 points per game. The defense held Tennessee to its lowest point total of the season.

Not much. The Packers' 19-0 lead shrunk to 19-14 before they put the game away, showing their tendency to let opponents get back into games. LaFleur called this “by far our most complete game in all three phases.”

WR Marquez Valdes-Scantling hasn’t caught a pass in four of his past five games.

OT Rick Wagner injured his knee. “I believe Rick is going to be OK, but we’ve got to take some time to get all the information,” LaFleur said Monday.

The Packers visit Chicago on Sunday in their regular-season finale. The Packers would clinch the No. 1 seed in the NFC if they win or tie, or if San Francisco beats or ties Seattle. The Bears would make the playoffs if they win.