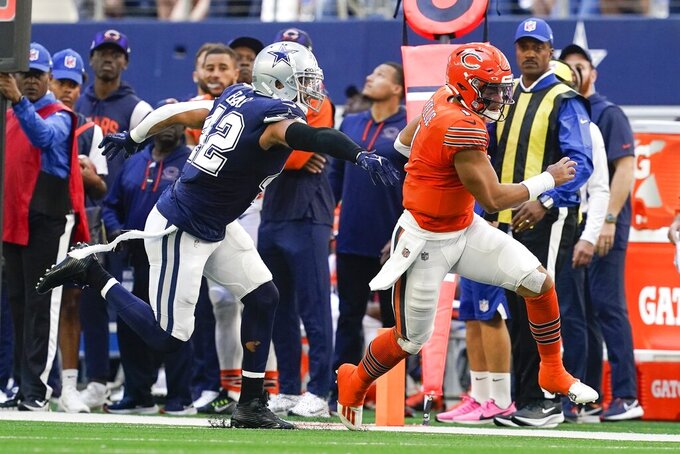 Chicago Bears' Justin Fields runs for a first down in front of Dallas Cowboys' Anthony Barr during the first half of an NFL football game Sunday, Oct. 30, 2022, in Arlington, Texas. (AP Photo/Nam Y. Huh)

TURNOVER DIFFERENTIAL: Dolphins minus-3; Bears plus-1.

DOLPHINS PLAYER TO WATCH: QB Tua Tagovailoa is coming off one of the best games of his career against the Lions, completing 29 of 36 passes for 382 yards, three touchdowns and no interceptions. His 138.7 passer rating was the highest in a single game in his career, and his season rating of 112.7 is the highest in the NFL.

BEARS PLAYER TO WATCH: QB Justin Fields has been at his best in recent weeks, particularly with the Bears calling more designed runs. Against Dallas, Fields once again took a step forward. He completed 17 of 23 passes for 151 passing yards and two touchdowns while posting a career-high 120 rating. He also ran for 60 yards and a score. In the win at New England the previous Monday, Fields threw for 179 yards and a touchdown and ran for 82 yards and another score.

KEY MATCHUP: Dolphins WRs Tyreek Hill and Jaylen Waddle against Bears CB Jaylon Johnson. Johnson figures to have his hands full whether he's on Hill or Waddle. Hill leads the NFL with 961 yards receiving, with Buffalo's Stefon Diggs a distant second (764). Waddle is fourth in the league with 727 yards.

KEY INJURIES: RT Austin Jackson (ankle) was activated from injured reserve Tuesday, but coach Mike McDaniel said he likely won’t play Sunday. ... OL Liam Eichenberg was placed on IR on Tuesday after he injured his knee against the Lions. ... The Bears opened a 21-day evaluation window Wednesday to decide if LG Cody Whitehair (right knee) will return after placing him on injured reserve last month. ... C Lucas Patrick (toe) is on IR. ... WR Byron Pringle (calf) was also in a 21-day evaluation window. ... S Eddie Jackson (hip), CB Kyler Gordon (hip) and RG Teven Jenkins (back) were on the injury report this week.

SERIES NOTES: The Bears are 1-4 against the Dolphins at Soldier Field, the lone win coming in the 1988 season opener. Miami won at Chicago in 2014.

STATS AND STUFF: A win Sunday would mark the Dolphins’ second three-game winning streak of the season — the second time that’s happened since 2016. A win would also make Miami 6-3 for the second time since 2001. ... Despite missing two games, Tagovailoa has twice as many completions (32) to the middle of the field over 10 air yards as any other quarterback this season, according to NextGen Stats. Tagovailoa is 6-1 against NFC teams with 1,686 yards passing and 14 touchdowns. Tagovailoa has also won 11 of his 13 starts since Nov 21, 2021, for a .846 winning percentage, which is the second best during that span behind Philadelphia’s Jalen Hurts (.917) among QBs with at least five starts. ... Hill’s and Waddle’s combined 1,688 yards receiving are the most by a pair of teammates in their team’s first eight games of a season in NFL history. ... The Bears traded two of their top defensive players in the past two weeks, dealing LB Roquan Smith to Baltimore after sending DE Robert Quinn to Philadelphia. ... Chicago acquired WR Chase Claypool from Pittsburgh prior to Tuesday's deadline, giving Fields a downfield threat to help balance the offense. Claypool has 32 receptions for 311 yards and one touchdown this season. ... The Bears are 2-0 against the AFC with wins over Houston and New England. ... The Bears could join the 1976 Steelers as the only teams in the Super Bowl era to run for at least 225 yards in four straight games. Chicago had 240 last week, after running for 237 in a loss to Washington and 243 in a win over New England. ... RB Khalil Herbert is averaging 6.2 yards per carry, tied for second in the league. He has 563 yards rushing. ... S Eddie Jackson is tied for the league lead with four interceptions.

FANTASY TIP: Tagovailoa figures to have plenty of time to throw with Quinn and Smith gone. And Hill and Waddle might have more opportunities to get open against Kindle Vildor when they're not going against Johnson.