Dolphins fought through some rust to extend winning streak 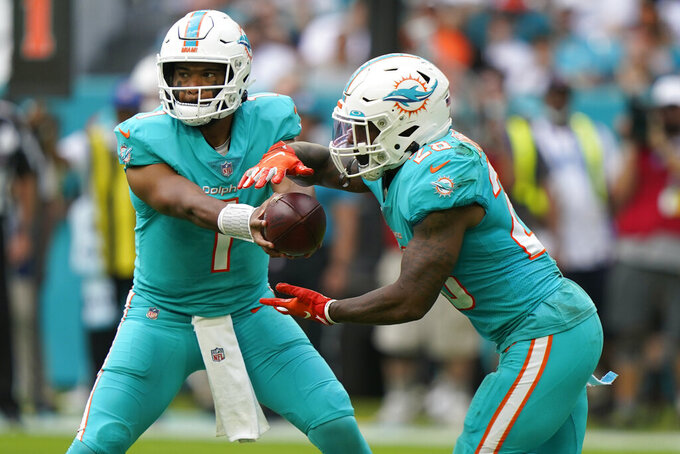 Miami Dolphins quarterback Tua Tagovailoa (1) hands the ball to running back Duke Johnson (28) during the first half of an NFL football game against the New York Jets, Sunday, Dec. 19, 2021, in Miami Gardens, Fla. (AP Photo/Lynne Sladky)

MIAMI GARDENS, Fla. (AP) — Tua Tagovailoa wasn’t sharp. His accuracy was way down compared to his norm in recent weeks. He had just thrown an interception that the New York Jets ran back for a game-tying touchdown.

He still found a way.

Add another entry on the list of Tagovailoa’s accomplishments as quarterback of the Miami Dolphins: a double-digit comeback. The Dolphins trailed 10-0 and 17-7 before rallying to beat the Jets 31-24 on Sunday, a game where Tagovailoa gave the lead away in the fourth quarter and then grabbed it right back to stay on the very next drive with a touchdown pass to DeVante Parker.

“Terrible decision on my part, obviously, with the pick-6, but (you’ve) got to move on. The game is not over,” Tagovailoa said. “We’ve got to go down and got to put some points on the board, and that’s what we did. You never want that to happen, but it does happen, and so just got to move on from it, and I’m glad we were able to overcome it.”

The Dolphins had lost 14 consecutive games in which they faced a double-digit deficit, including 12 straight over Tagovailoa’s two pro seasons. It wasn’t easy on Sunday: Tagovailoa completed 16 of 27 passes, finished with a passer rating of 75.5 and had two interceptions. That isn’t a winning formula: quarterbacks with those numbers or worse have seen their teams go 4-31 this season, and the Dolphins were 1-26 over the past 15 seasons when their quarterback had such stats.

There were some reasons, if not excuses. Miami was coming off a bye week and had the entire week of Jets preparation disrupted by some players — including top receiver Jaylen Waddle, Tagovailoa’s go-to guy this season — spending time on the COVID-19 reserve list. Waddle ended up missing the game, which clearly didn’t help matters for Tagovailoa and the Dolphins.

“I think as a team, we were rusty in a lot of areas,” Dolphins coach Brian Flores said. “Some penalties, some missed tackles, so not going to put it on Tua. Obviously, he had some plays he wants back, but he battled back and took us right back down the field after the turnover and punched it in at the end and gave us the winning score, the winning points.”

And that was all that mattered. Miami’s winning streak went to six games, and its playoff hopes — still fledgling at best after that 1-7 start — live on for at least another week.

RB Duke Johnson. The win over the Jets brought career highs for carries (22), yards (107) and touchdowns (two), and the Dolphins ended up signing him to the 53-man roster for the rest of the season after he started on Miami's practice squad. In his first 105 games, he’d never carried the ball more than 16 times, never had more than 78 rushing yards and found the end zone only eight times on carries. A perfect homecoming for the Miami native, at the perfect time, and now the Dolphins must decide if he’s atop the depth chart going forward.

The Buffalo Bills, especially this week. No, seriously. The best path to Miami making the playoffs — along with three more wins to end the regular season — is Buffalo winning the AFC East.

That means this weekend’s Buffalo-New England game is huge for the Patriots (9-5), Bills (8-6) and Dolphins (7-7). The key is that if Miami and New England both finish 10-7, the Dolphins would hold the tiebreaker. If Buffalo and Miami ended up tied, the Bills hold that tiebreaker by sweeping the series.

P Michael Palardy. He was playing in the 70th game of his career on Sunday; it was just the fifth in which he averaged 53 yards per punt and the first such game since 2019.

Whoever the person was that was tasked with preparing Miami for trick plays. Flores was asked during the week if it’s reasonable to expect a team that isn’t in contention to loosen up the playbook. The Dolphins then proceeded to give up a pair of 23-yard gains in the second quarter on unconventional plays the Jets called for Braxton Berrios and Ryan Griffin. “If you have never seen them, you really can’t prepare for them,” Flores said.

Waddle was coming off the COVID-19 reserve list on Monday. Flores said Monday that WR Will Fuller, who has missed most of the season with finger fractures, is no longer expected back this season.

3 — This is only the third season in franchise history where the Dolphins have won six consecutive games, all of them by at least seven points. The other seasons were 1973 and 1984; they went to the Super Bowl in both of those seasons.

The Dolphins play the Monday night game this coming week, heading to New Orleans in a matchup of teams who have survived long losing streaks and fought back to 7-7 records. Miami had its seven-game slide; New Orleans lost five straight to fall from 5-2 to 5-7, then rebounded to win its past two contests.