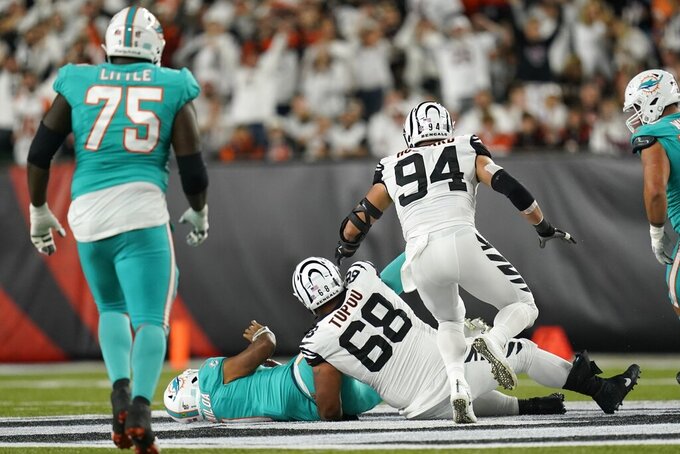 Miami Dolphins quarterback Tua Tagovailoa (1) is sacked by Cincinnati Bengals' Josh Tupou (68) during the first half of an NFL football game, Thursday, Sept. 29, 2022, in Cincinnati. Tagovailoa suffered a second frightening injury in five days when he was carted off the field Thursday. (AP Photo/Joshua A. Bickel)

MIAMI GARDENS, Fla. (AP) — Brian Flores hasn't spoken much about the Miami Dolphins since joining the Pittsburgh Steelers in February.

But when he has, he's insisted on leaving the past in the past.

That might be difficult this weekend. Sunday night’s game between the Steelers and Dolphins marks Flores’ return to South Florida for the first time since he filed a class-action lawsuit against the NFL and three teams shortly after the Dolphins fired him.

It’ll also be the first game quarterback Tua Tagovailoa will start since suffering a concussion on Sept. 29 against the Cincinnati Bengals.

The Dolphins fired Flores, who is Black, in January after three seasons despite a 24-25 record and a stunning turnaround in 2021 in which Miami won eight of its final nine games after losing seven straight.

Three weeks later, Flores sued the NFL, the Dolphins, the New York Giants and the Denver Broncos over what he alleged were racist hiring practices, saying the NFL was “rife with racism.”

The Steelers hired Flores less than a month later as a senior defensive assistant working with linebackers.

Pittsburgh coach Mike Tomlin and Dolphins coach Mike McDaniel downplayed the idea of Flores’ familiarity with the Dolphins — and Tagovailoa — being an advantage for the Steelers.

McDaniel said the game is about the players on the field.

“Defenses have tried various things against our offense with Tua at the helm,” McDaniel said, “and sometimes it works, sometimes it doesn’t. I don’t see a consistent theme."

Tomlin added that Flores, often described as having an austere, soldier-like presence, is a “great communicator,” something that has been echoed by some of Pittsburgh's linebackers.

“You want answers, you get direct answers," said linebacker Devin Bush. "You don’t really get all the fluff.”

Many Steelers players have said it's like having another head coach on staff.

“Flo is a man that understands football with the best in the world and he presents it in a way that it’s an open discussion,” linebacker Rob Spillane said. “We talk about plays. We learn from each other in the position room. We are able to speak our minds and tell him how we feel about certain things. I love being able to work with a guy like that. Not all coaches are like that.”

The NFL suspended Ross and fined him $1.5 million following a six-month investigation stemming from Flores’ racial discrimination lawsuit. The investigation found Ross and the Dolphins had impermissible communication with Buccaneers quarterback Tom Brady and his and Sean Payton’s agent, Don Yee.

“With regard to everyone in the organization, the players really appreciate him,” McDaniel said of Ross, “because he allows myself, (general manager) Chris (Grier) and everyone else in the organization to do whatever it takes necessary to try to produce a winner. And he gives us all the resources possible.”

Steelers rookie quarterback Kenny Pickett exited last week's upset win over Tampa Bay in the third quarter with a concussion but will start after clearing the league's concussion protocol. Pickett practiced during the week without limitations.

Mitch Trubisky, benched in favor of Pickett at halftime of a loss to the New York Jets on Oct. 2, played well after relieving of Pickett but Tomlin reiterated the club remains committed to giving Pickett a chance to learn on the job.

Pittsburgh's victory over Tampa Bay was all the more stunning because of who the Steelers did it with in the secondary. Pittsburgh held Brady in check despite not having four of its top five defensive backs, including star safety Minkah Fitzpatrick.

Fitzpatrick and cornerbacks Cam Sutton (hamstring) and Levi Wallace (concussion) could return to face the Dolphins. Yet the play of substitutes Josh Jackson, Quincy Wilson and Elijah Riley gives Tomlin options down the road.

“It’s a mentality that we have here in Pittsburgh that we don’t discount anyone, that everyone within our organization is viable,” Tomlin said. “That’s just the sentiment that we try to have at all levels, and when guys get an opportunity to ascend and make plays and positively contribute to a winning effort, it solidifies that.”